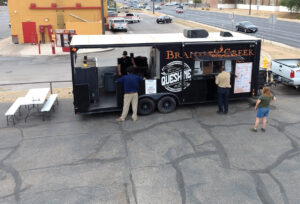 Odessa – Finding craft BBQ in west Texas is not always easy to find. So when I heard about a BBQ trailer in the middle of an Odessa parking lot, I wasn’t sure if it would be a big hit.

We happened to be in Odessa when I saw the barbecue truck with a really long line, so we figured it was time to see what Brantley Creek BBQ was all about. We came to understand why this place has such a good reputation!

Brandon McPherson is the owner and pitmaster that wears his Texas pride on his sleeve. Growing up in Odessa, he started off his career working on the pumpjacks but always had barbecue in the back of his mind. “It’s nice to bring something to Odessa that hasn’t been around, a craft barbecue,” said Brandon.

He grew up with his grandfather always barbecuing in his backyard and loved the smell, taste, and the work it took. “I feel like it was a challenge,” Brandon said. Being in west Texas, a challenge it is. 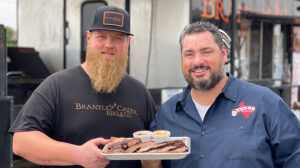 Brandon got started making BBQ after losing his job in 2019. Despite the pandemic, Brantley Creek BBQ boomed. “Opening a food truck during the pandemic really helped us out. Being COVID, nobody wanted to go inside anywhere. We had lines all the way to the fence back there,” Brandon noted.

One of the big hurdles Brandon must overcome is finding where to get the wood from. There aren’t many trees in Odessa, so it can be difficult to find a good wood source. He gets his wood from the other side of Abilene because the little bushes near by won’t cut it according to him. 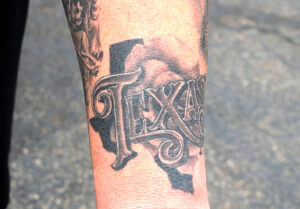 Brandon has another small disadvantage. He’s never tried any of the big-name BBQ joints across the state, so he doesn’t have much to compare his food to.  “There’s so many places I want to go try and people I want to talk to, but I’m a lone ranger out here,” he mentioned. “It’s a little bit scary. I was a little leery, but we just keep fine-tuning it and going with it.”

It was time to put together a platter! Brandon sliced up his prime beef brisket that he cooks on a 1000-gallon offset smoker using mesquite and oak. Then ribs are were added to my plate. Brandon’s family recipe of pinto beans is a popular side, with a subtle tone that goes perfectly with the barbecue. The mac and cheese is another popular side dish. It’s ooey, gooey, and gushy, making it the perfect addition to your plate. Add in a Texas twinkie with the jalapeno and cream cheese that provides a little sweetness, and all that adds up to one massive plate of meat. 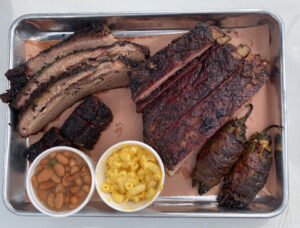 “This gives that true barbecue and everything. You can order it for a good, decent price and eat some good food,” says patron Brandon Watts.

I could tell by the aroma in the air that it smelled just like some of the best, because at The Texas Bucket List, we set the bar high when it comes to barbecue across the great Lone Star State. We’ve had some of the best, and if you’re wondering if Brantley Creek BBQ measures up, yes, it does! 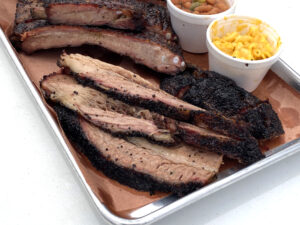 Despite his incredible BBQ, Brandon is a humble man of few words. When asked why coming and trying Brantley Creek BBQ is something every Texas must do before they kick the bucket, Brandon answered, “Man, I don’t know. I’m sorry.”

“Well, because it’s the best barbecue out here,” says Sao.