Mount Pleasant – On any early morning in East Texas, as the moon still shines over the Lone Star State and the hustle and bustle around Mount Pleasant begins, cheesecakes are already coming out of the oven in a commercial kitchen just off the square.

When you walk through door, the smell of butter emanates through the air. “Yeah it does. We like butter,” joked baker Robin Croley.

Robin is the head baker at Laura’s Cheesecake and she’s up all night making sure these delicious cakes are ready for the new day ahead. Her passion and positivity, combined with her East Texas charm, might make her sweeter than the treats she’s putting together. Robin said, “it’s not just about a cake, it’s about a Laura’s cake to me. That says something.” 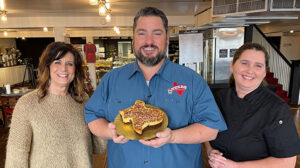 Suzanne Walker is the current owner of Laura’s, but she’s not the second or third owner. Laura’s has traded hands four times since Walter and Laura Bass created the Main Street Bakery in Dangerfield, Texas back in 1989. But there has always been one consistent component to this place, and that’s Robin. “I wouldn’t have bought this place if Robin didn’t come with it. She had to be a package deal,” Suzanne joked. “Her work ethic is incredible. She truly does care about people and that’s what she does.”

For Robin, it’s about making more friends and more memories. She said she’s made friendships with all of the owners and has worked with many great people. “Every owner has brought their passion to the table and their strengths and has helped escalate Laura’s to the next level. But the most beautiful piece of it is Robin, who’s that common thread who weaves it all together,” Suzanne said.

This decade Robin will be hitting 40 years of doing this, and she is proud that Laura’s is still in business after all this time. “She came in with a baby on her hip and looked at Walter and she said, “I need a job and I’m going to have a job today. You can hire me or I’ll find someone that will.” He thought, why not? So he rolled the dice and it was the best dice roll he ever had,” said Suzanne. 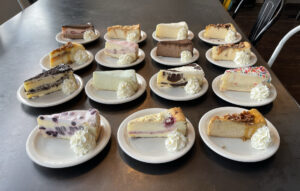 After learning how to make these legendary cheesecakes from Laura herself, Robin has been regulated to continuing this East Texas tradition. Suzanne makes sure Robin always has everything she needs. “We haven’t altered it. We haven’t changed it. We took what was working and kept it,” Suzanne mentioned.

When you come to Laura’s, you get to start off with a tried-and-true regular cheesecake.  With absolutely amazing flavor, it is the perfect cheesecake. The texture is great, it’s so buttery smooth.

Now if you’re someone who thinks the best cheesecakes come from a big ol’ city, Robin has flown the coop on that idea. She said, “this is a Texas cake, I guess.”

If you ever find yourself in Mount Pleasant, you need to have a piece of Laura’s cheesecake. Like Robin said, “all the rest is just cheesecake.”