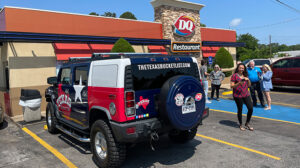 Henderson – As we travel across the backroads of Texas, there is one thing we can depend on in almost every town in our state, and that’s our friends from Dairy Queen. One DQ in east Texas has a unique distinction making it well worth a stop on The Texas Bucket List.

Rob Beall is the owner and operator of five Dairy Queen locations in east Texas, including the store in Henderson which has the distinction of being the oldest DQ in the Lone Star State.

“To be a true Texas town, you had to have a church, a bank, and a Dairy Queen,” says Rob.

Since 1950, this Dairy Queen has been sitting at the busiest intersection of this small town serving all kinds of soft serve. It wasn’t the first DQ in Texas, but it is officially the oldest.

“It means a lot to Henderson to have something like this that we can always depend on,” said Henderson Mayor Buzz. 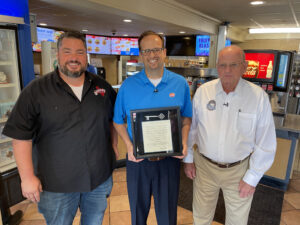 Dairy Queen brought their frozen treats to Texas in 1947, making it a part of the Lone Star State for 75 years. Originally from Illinois, DQs in Texas have something that makes them all unique. Each Dairy Queen is individually owned and operated by Texans. Additionally, they have unique menu items you won’t be able to find anywhere else in the country. Rob mentioned, “you can’t get a Hunger Buster anywhere, a Dude anywhere, can’t get T-Brand Tacos anywhere but Texas.” 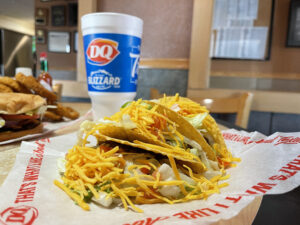 They were invented here by JN Grimes and Ray Morrow.

“In the mid-sixties, they came up with the Steak Finger Basket and the Dude, and they became a hit,” said Gene Brumbelow.

Gene owns a few Dairy Queen locations in east Texas, and his father-in-law, JN Grimes, had a hand in creating some of the special foods that can only be found in Texas. Gene continued, “when you go outside of Texas and you go to Louisiana, or you go to Oklahoma, or anywhere, you don’t find the Hunger Buster, Belt Buster. You don’t find the tacos. You don’t find the Dude. So, it’s unique, and it’s purely Texan, really.”

Gene actually owned the oldest Dairy Queen in Texas before Rob, and Gene had the task of bringing the location out of the 50s.

“We protected the original footprint, but made it a little nicer and cuter,” Gene said.

However, there was one special item they could not get rid of.

The original walk-in cooler, known as the icebox, still stands in the building. They decided to keep it as part of the history of the building. Thankfully, they don’t have to use it anymore, but it sure does make for a good conversation piece! 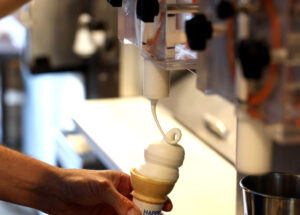 Many people, including Henderson Mayor Buzz, are full of fond memories about this Dairy Queen. Mayor Buzz said, “I remember the ice cream cone. A large, tall ice cream cone-dip cone. Yeah, that was my main event. I’d never had one before.”

Speaking of ice cream, a key staple of a DQ cone is the Q on top. It’s even trademarked!

Rob said it is definitely a skill you have to learn, and it can take some time. There is training to learn how to do the Q, but once you learn it, you know it for life.

“I’ve really impressed some people in Mexican restaurants with the ice cream machines. Some of them will say, ‘you ought to work at Dairy Queen.’ I’ll go, ‘yeah, I guess I should,’” Rob joked.

There are three key parts to create the DQ cone. You start with the base, then the balls, and finally the curl. Rob made it look easy, but mine turned out a little rougher. But no matter how it looks, it still tastes good!

After 75 years of history in Texas and being acknowledged as the oldest DQ in Texas, Rob was presented with a key to the city of Henderson to recognize the contribution these tasty treats have made to the city.

Rob said, “I’m a proud Texan, and I can’t think of anything more Texan that being in the Texas Dairy Queen business.”

If you ever find yourself in Henderson, visiting the oldest DQ in our state is a fun stop on The Texas Bucket List because, well, that’s what I like about Texas.