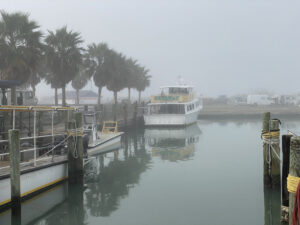 Brownsville – It’s not often you get an extremely foggy day down on South Padre Island but that was exactly the case when I arrived on SPI to take a tour of the Port of Brownsville.  Despite the dense cloud cover, it doesn’t keep James Woodrow Wilson from boiling up some shrimp because he’s busy preparing a feast for a few folks wanting to take a ride on his boat.

Once the crowd is settled, Captain Woody, as he’s called, takes the sightseers on a carefully guided journey through the Port of Brownsville. Woody is the captain of the Breakaway Cruises Port of Brownsville Tour and he has one interesting past, that all starts with his name. “Well, I get a lot of grief about it. And I’m still waiting for my check for Toy Story,” joked Woody. “I was original, boots and all!” 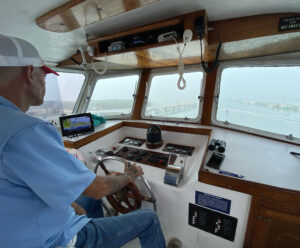 While being a cowboy is every young boy’s dream, being behind the wheel of this ship is where Woody belongs. “Love driving boats. I love being on the water. It’s just been a passion of mine ever since I was little. And just meeting everybody. You meet everyone from all over the world, I’ve met on this boat.”

Shannon Cherrington helps Captain Woody on the tour, making sure things flow smoothly along the waters of the Brownsville ship channel. “There’s so much to see out there and it’s so rich in history,” said Shannon. 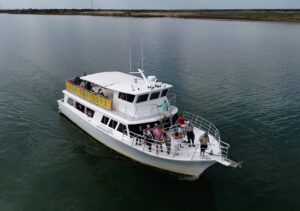 While trolling down the port, you’ll see massive offshore oil rig platforms being repaired. There are also ships being built and massive military ships being decommissioned. “This was an old aircraft carrier that, if I’m not mistaken, it was the Bonhomme. It was one that succumbed to arson by one of the crew members. And the damage was worth, basically a total loss.” Oh, wow. “It would cost more for them to repair it than it was worth. And it’s worth more in scrap than it would’ve been for them to repair it,” said Captain Woody.

If space is more your speed, a pass by Space X will light your engines. “Seeing all the rockets, whenever they’re getting ready to launch and all that, sitting out on the launchpad, it’s amazing,” Woody commented. “Watching them take off and being able to land, 40 years ago that would’ve been unheard of. But just seeing technology advance with what they’re doing over here, it’s just mind boggling to me.” 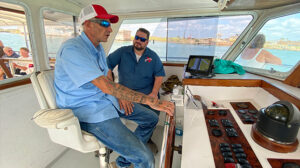 Not only do you get to see some amazing things on the sightseeing tour, but you also get the chance to enjoy some of Captain Woody’s shrimp which is an old family recipe – and it’s delicious.

If taking a unique tour with a unique captain who happens to cook is something you’d like to see, sailing with Captain Woody on the Breakaway Cruises Port of Brownsville Tour is definitely a unique stop on The Texas Bucket List!