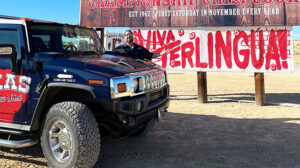 Terlingua – Over the years, I’ve been blessed with bountiful bowls of chili at some incredible places like the Phoenix Saloon in New Braunfels, the Texas Chili Parlor in Austin, and of course, Tolbert’s in Grapevine. Tolbert is a name synonymous with Texas chili thanks to Frank X. Tolbert.

Back in 1967, he helped create the most famous chili cookoff in the Lone Star State, the Original Terlingua Championship Chili Cook-off. “The experience in the desert with the chili out here is just special,” said Patrick Ryan, Frank X. Tolbert’s grandson. 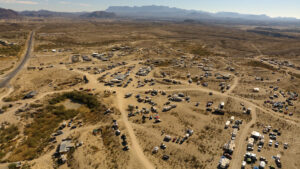 “It’s my middle name. It’s Tolbert.” Really? They gave you his middle name. “Yeah.” Interesting. Had to keep that history going. “Yep. My mom insisted upon it.” And with lineage like that, I can understand why!

Patrick’s grandfather wrote for the Dallas morning news for 40 years, so he knew lots of people and even featured them from all over in his column called Tolbert’s Texas. Sounds familiar! Frank and CV Wood and a New York journalist decided they wanted to have a cook-off between Yankees and Texans to see who could make the best chili.  So in 1967, they came up to desert to hold the event.  In the end, they tied, so they had to do it again, year after year. It became a tradition, and now happens the first weekend of November every year, in one of the most desolate destinations in the whole state. “There’s dancing and there’s a little bit of drinking, a lot of chili tasting. We’re in Texas!” said competitor Steve Gaconnier. 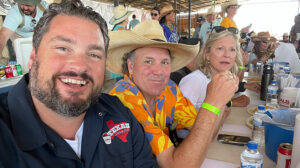 “You’re graded on your aroma, taste, consistency, and color,” Christine Knight said. Christine has been coming to the Terlingua Chili Cook-off since 1998, and in 2010, she took the title. In order to get into the cook-off, you have to have won in the past which gives automatic qualification going forward, or you have to compete at cook-offs year-round in order to rack up enough points so you can qualify to cook. While most cooks compete all year to get this level, Steve Gaconnier doesn’t take your typical path to get to this chili cook-off. “I’m too lazy to do that, so they have what’s called Last Chance Chili, which means, yesterday we could cook, and if we get in or win the top 10, we get in the big show today,” Steve said. 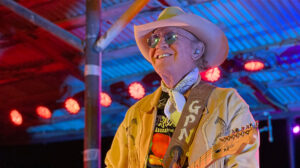 After lots of ladling, sampling, and deliberating, competitors turn their chili, sit, and stew while a team of judges, including yours truly, sample the final entries allowed at the hallowed final table. As the final votes are tallied, a crowd starts to form, eager to hear who will take the title. Steve placed 12th and Christine placed 4th! The first place winner was Gene Moffett with his 48 Volt Maxdale Special Chili from Temple.

So if you happen to find yourself free the first weekend of November, make your way to Terlingua to experience the largest chili cook-off in the country.