The Texas Bucket List – Be Blessed BBQ in Nacogdoches 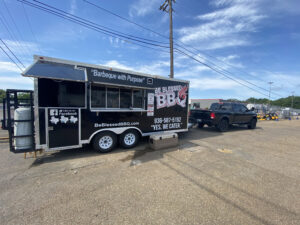 Nacogdoches – When it comes to BBQ in the Lone Star State, you can find fantastic offerings in all sorts of places. But for folks just getting started in the restaurant industry, food trucks are a great first step to see if your food has what it takes. At Be Blessed BBQ in Nacogdoches, they shouldn’t be in a trailer for too long.

Jeremiah Moss is the owner of Be Blessed, but BBQ isn’t all he does. Jeremiah is also a pastor. He believes that Be Blessed BBQ is blessed to be a blessing, and barbecue has given him a way to be able to do that.  “There’s only two things that I know, that’s Jesus and barbecue.” 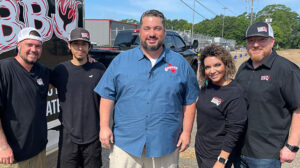 Jeremiah started his BBQ venture to raise funds for a mission project and he was divinely pointed to his first pit.  “Man, I was carrying a group to Nicaragua, and we were doing a mission trip there and prayed and said, “God, we need the funds to do this.” And I felt like the Lord told me, “I already gave it to you.” And what I saw was, over at our building, there was this old barbecue pit, man. It was broken, bust, disgusting. It had a tree grow up to the fire box. And I felt like the Lord said, “I gave it to you.” I said, “If this is coming for you, it’ll be gold plated, angel singers, not this.” And we yanked it out. I had never barbecued before then. Didn’t know anything,” said Moss.

The ol’ BBQ pit pulled through and helped with several mission projects before Jeremiah got a surprise donation. “Eight months after doing that, I got a new pit to deliver to me. Now it did look like it come from God. It was brand new; it was nice. Had a sign on it that said, “Be blessed, love God.” And that’s when Be Blessed started. And they’ve been barbecuing ever since 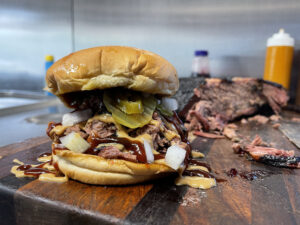 “Anybody that puts Be Blessed on their sign and has a business, then you know it’s going to be a good business and going for something good,” said customer John.

Pit master Joshua Henderson has been working with Jeremiah since 2020. He helps smoke the brisket for 15-16 hours and it is incredible. The brisket has a great bark and flavor, but Jeremiah wanted to make a signature sandwich. That’s when a friend recommended that he make a brisket sandwich with peanut butter and jelly. Jeremiah wasn’t sold on this idea, but one night, he decided to go ahead and taste the forbidden fruit, and it was like being born again. He put it on the menu the very next day!

I love peanut butter, so I wanted to see what this sweet and savory concoction was all about, so Joshua got started by toasting the bun. Grape jelly is added, a chopped brisket on top of that, and then comes the peanut butter, which is more like a peanut butter sauce.  Sort of like what you get with spring rolls and most Vietnamese restaurants.  The comes barbecue sauce, onions, pickles, and jalapenos, I wasn’t sure what to expect. 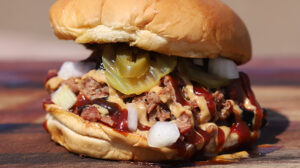 After taking a few sniffs my nose didn’t know what to expect but after I took a big ol’ bite, I found out that this sandwich is so good, it almost felt sinful. “If you don’t like peanut butter, you may not like it,” Jeremiah said. “But if you like peanut butter… you’ll probably hug me when we get done with this.” The sweet, the savory, and then those pickles bring in a little sour. This sandwich has got it all.

If you’re looking for a crazy combination in barbecue sandwiches, one with peanut butter, jelly, jalapenos, pickles, onions, and delicious barbecue, coming to Be Blessed BBQ in Nacogdoches is well worth a stop on The Texas Bucket List.

“I just want to live life pleasing to Christ and to be a blessing. And if I die doing that, I’m happy, brother. I’m fulfilling my purpose in life,” said Jeremiah.