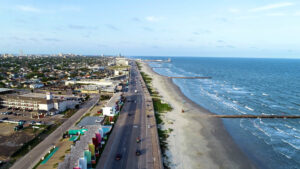 Galveston – With a name synonymous with Galveston history, The Maceo family keeps the family business alive and well, 100 years since it became so entrenched with island lore.

“When I was growing up, the Maceo history, the past of Maceo’s on the island was something that they kind of wanted to put behind them. So they didn’t want me to really know, and I’m the youngest of all the cousins,” said Concetta Maceo-Sims, owner of the Maceo Spice and Import Company.

Concetta has a family connection to Sam Maceo, the man who ran things on Galveston Island from the 1920s until the 50s. Gambling, bootlegging, and organized crime were a few of his endeavors. “My grandfather’s generation, he was the last of anyone that had anything to do with the Balinese Room. So it was like hush hush, we didn’t talk about that stuff,” Concetta said. 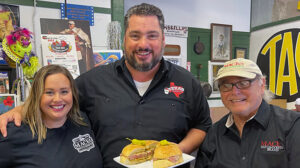 But Concetta’s father, Ronnie, knows.  While she can tell you all about spices in the food and the place, she refers them to Ronnie when people come in wanting to talk about the history of the Maceos. “He’s a wealth of knowledge about the island, about our family history. He’s a great cook. He brings such a cool aspect to this place that not many places have,” said Concetta.

Ronnie’s grandfather, Frank, immigrated from Italy to New Orleans in the 1900s and Sam brought him to Galveston to help out with the family business. Ronnie said his grandfather was born on Bourbon Street, and they lived on the corner of Royal and Du Main with Tony Lavoi. Tony is Ronnie’s great great uncle, and he believes Tony invented the popular muffuletta sandwich around 1901, not the popular New Orleans eatery, Central Grocery, which claims the invention of the sandwich in 1906. 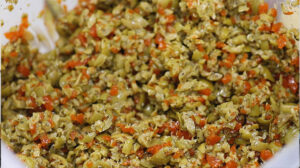 e we’ll never know for sure, the one thing I do know is the Maceo’s use an olive dressing that is a family recipe, as is the bread. But the most important part to Ronnie. “It’s made by Maceo,” he said.

The Maceo Spice Company was started in 1944 by Ronnie’s father, Rosario, who got tired of slinging spice in the 80s. Ronnie said Rosario wanted to quit, and that’s when Ronnie started coming down every day to work with him. That’s when Ronnie convinced his father to bring the family’s sacred sandwich back to the menu. “There’s a lot of Cajun cuisine influence on our family and our style of cooking,” Concetta said. “The red beans on the menu, that’s my mom’s recipe. The gumbo is my dad’s recipe but we had to bring in a little bit of something other than Italian.” It’s a unique combination. 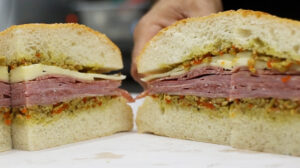 Then I got the chance to see how the Maceo muffuletta is made. First the bread, which is Tony Lavoi’s recipe, was cut nice and level and Ronnie added some olive oil and a mixture of Maceo seasoning. The first layer is Maceo’s famous olive salad. Four layers of polish ham and Geneo salami get placed on top of that. Ronnie adds some more olive oil, provolone cheese, another layer of olive dressing, and heads for a streamer that toasts the bread. While the sandwich finished up, Ronnie combines the muffuletta with homemade gumbo.

The bread, the olive dressing, and all that melty cheese creates a heavenly smell. I’ve been to New Orleans many times for the muffuletta there, but this one blows it out of the water. The gumbo was incredible. I didn’t know you could get gumbo like this in Texas.So if you’re looking for a find sandwich, a delicious cup of gumbo, come into Maceo’s Spice Company here in Galveston Island. It is well worth a stop on The Texas Bucket List.