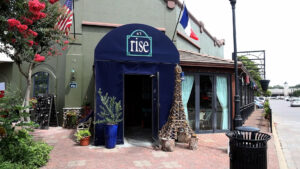 Dallas – When it comes to French food in Dallas, there are a few options. But if you’re seeking a serious soufflé, a stop on the edge of the Park Cities at Rise is where your journey takes flight.

“Once you taste it, you will find that it’s an addiction,” said owner Hedda Gioia Dowd.  Dowd is a self-proclaimed Francophile all thanks to several summers in France visiting her grandparents when she was a little girl. Hedda would hang out in the kitchen with her mother and grandmother making soufflés, and that’s when a serious love set in. The only problem was, Hedda couldn’t find soufflés in the Lone Star State that were anything like the ones her grandmother made, so she created Rise. 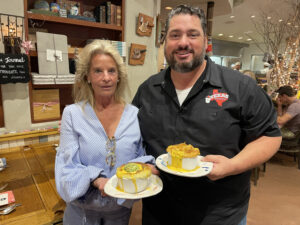 “There were a lot of people that thought, ‘That is not going to work, and it certainly will not work in Texas,’” Hedda said. But the biggest hurdle she had to face was showcasing soufflés that offered a more satisfying purpose than just something sweet.

“Many folks are used to a dessert soufflé, chocolate, Grand Marnier, or a fruit soufflé, but not many people have been exposed to savory soufflés,” she said. “It’s a category that we have really taken and expanded.” 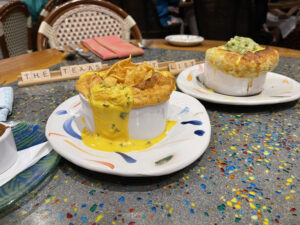 These soufflés are so sought after that even heads of state seek them out. For George Bush, eating here is like getting a W. Hedda said that he and Laura have been so supportive of Rise ever since they left the White House. They come in as if they were eating at their own home.

With so much variety, from crab meat to ham and cheese to cauliflower and brie, Rise has it all. Melinda, a loyal customer, said, “It’s like nothing else. You’re never going to find anywhere else like this.”

Hedda was adamant that I try two savory soufflés, one with chili and cheese and another with ceviche. “You happen to be the recipient of the Texas Frito Chili soufflé that no one on this planet has ever seen or tasted, but Shane, you are about to.” Oh, that’s exciting, “It’s very exciting.” I don’t know if putting chili and Frito’s in a soufflé is bringing things down or taking things up a notch. “Oh, it’s going to take them up a whole notch,” said Hedda. 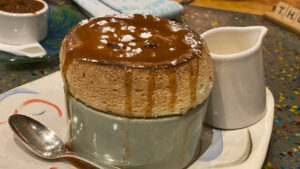 Chef Alberto Solis has been whipping up soufflés at Rise since 2015 and it all starts with egg whites and a pinch of salt. Once it’s whipped up, Alberto mixes in the other ingredients for the particular soufflé – in my case, chili and cheese for one and shrimp, cheese, cilantro, and more for the other. While those were baking, I got the chance to make a dessert soufflé, but Alberto whipped my behind.

Once they were done, I got to enjoy each soufflé. The flavor was fantastic! Pillowy and perfect, rich and filling. All around sensational.

So if you’re looking for sensational flavors that come from across the sea that happen to have a little Tex and a little Mex in them, come into Rise to get the soufflés. This is well worth a stop on The Texas Bucket List!