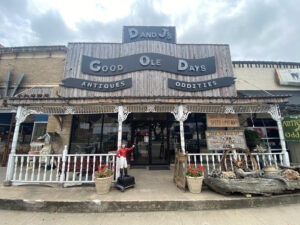 Brady – Smack dab in the center of the Lone Star State sits Brady. With a population of around 5,000 folks, it’s by no means a big town. But it does have one big store that brings in a bunch of folks. It’s called D&J’s Good Ole Days and if you plan on stopping by it might just take you days to see it all.

DeAnn Evridge is the D of D&J Antiques, and the J is her husband, Joe. They opened this business filled with heirlooms and oddities back in 2010 to fill the time during retirement. “We decided to open a little antique store and just be open one or two days a week. And now it’s gone to six days a week full time, and sometimes we’re open on Sunday afternoons,” DeAnn said. 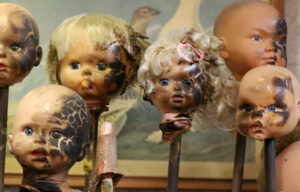 Interesting store. “Yeah, I would say so. Hope so. It keeps people coming.” Yeah. You never know what you’re going to find here. “That’s right. Well, you want it to be a surprise every time you round a corner.” Some scary stuff, some unique stuff, some odd stuff, some interesting stuff. You run the gamut here. “We like to say we have it all,” joked DeAnn.

From creepy doll heads to random family photos to disposable cameras, the selection at D&J is one of the most off-the-wall collections I’ve ever come across. It does make you wonder, who would want this stuff? “We want a uniqueness to our store,” DeAnn said. “We don’t want something that you’re going to see in every other store in town. It’s kind of our calling card.” 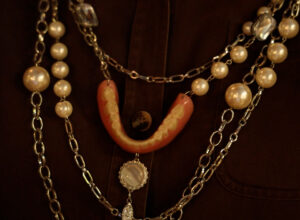 To decide what to carry in the store, DeAnn and Joe must love it. If they don’t like it, it doesn’t matter how much it’s going to sell. They don’t have it unless they love it. One of their most prominent collections is that of prosthetic eyeballs.  “We’ve got quite a few. So, you can pick out your color. You can pick out whether or not you want busted veins in your eyes, depending on whether or not you had a hard night. You want it to match your other eye,” said DeAnn while rummaging thought the collection. Never did I realize that fake eyes had so many options.

This crazy, unique, random stuff are things you can’t find on the internet. While they are working on a website, they don’t have many items listed on there because they like to have one-of-a-kind items which can be hard to do on the internet.  “When we opened at first, we realized there was going to be a real big calling for oddities and unusual things. We’re on the road from here to Austin,” DeAnn said. “So, you know you got to help keep it weird a little bit.” 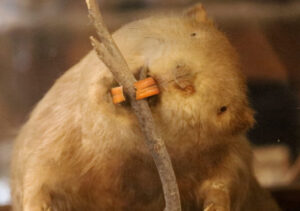 Most of their unique items come from word of mouth. People drive up every day with their trucks or cars full of stuff. DeAnn and Joe have even bought a couple of houses with everything in it!

Here in the heart of Texas, seeing the center of the Lone Star State only takes a few minutes but diving into everything at D&J Antiques, well, that will take some time and it’s time well spent on The Texas Bucket List.