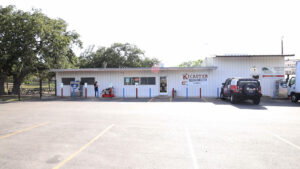 Scott moved to Texas with his family when he was a young boy back in 1981. Prior to creating the Kicaster Country Store in 2017, Scott created fancy burgers for a big time Texas burger franchise.  So coming up with unique concoctions is nothing new for Scott. 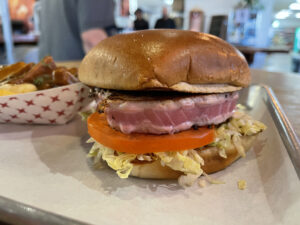 The first step is getting his meat is sourced locally and considering this beef comes from a local rancher right down the road, these burgers check that box.  “I pick them out while they’re on the hoof and we know where that’s been the whole supply chain until we grind it and put it in the patty and serve it to our customer. And it makes a huge difference.” Those cows get nervous when they see you show up. “Yeah, I guess they do, although they only meet me once,” said Scott.

The freshly ground burgers are a big draw, but there’s something else around here that Scott is also known for and that’s the Spicy Ahi Tuna sandwich. “Tuna was basically customers saying, ‘We want a fish option,’” Scott said. “I love a good piece of sushi grade tuna, so we decided to do ahi.” 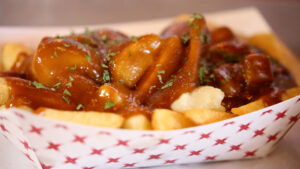 There’s another popular dish that’s quite a conundrum out in the country which is poutine. Poutine is a pretty simple dish made up of French fries, Wisconsin white cheddar cheese curds, and brown gravy. Scott said the main reason it’s on the menu is so they can utilize more of the animal. 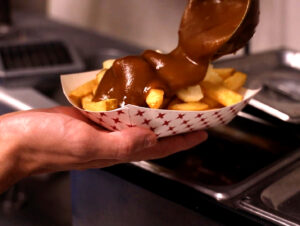 It’s not often we travel across Texas and go to county stores and see ahi tuna and poutine. Scott’s cook, Aubrey Stewart, got to work on whipping me up these two exotic offerings. Finding the perfect piece of fish, Aubrey cooks it and adds some spices, then finishes off the sandwich with some toppings.

Next, the poutine, a traditionally Canadian dish, is put together by topping the fries with the homemade gravy. “It’s Texas gravy. We like our gravy thick. We like stick to your ribs gravy. The poutine up north is going to be a little bit more runny. We do Texas style because we’re serving Texas,” said Scott.

With so many different smells coming off the plate, my nose didn’t know what to expect and neither did my mouth. I went straight into the gravy made in-house. Thick and delicious, not too salty, with the addition of the cheese curds made for a sensational dish. I then bit into the ahi tuna sandwich which had a lot of spice that lingered. Such fantastic flavor that made a nice, lighter sandwich. 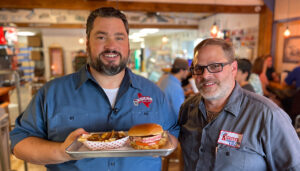 “You can’t knock it until you try it. That’s all I got to say about that,” said customer Elaina.

If you’re looking for some far away flavors like poutine from Canada or a fantastic ahi grilled tuna sandwich, visiting the Kicaster store in the middle of Kicaster is well worth a stop on The Texas Bucket List!