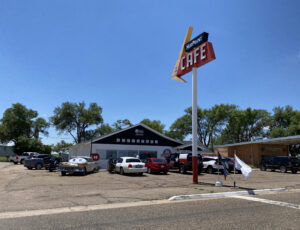 Adrian – The great wide open of the panhandle plains of Texas, the road seems to go on forever, especially the world-renowned Route 66. From big steaks, painted Cadillacs, to neon covered service stations, there’s all sorts of sights to see on the 179 miles of Route 66 that pass through the Lone Star State.

Brenda Hammit is the owner of the Midpoint Café, a casual eatery that sits right on the old Route 66. Despite the fact tons of traffic passes by her on the Interstate right behind the building, she still gets plenty of starving sightseers. But it’s not just BLTs and hamburgers that draw people in. They’re also looking for a taste of history. “They’re enamored with 66 period. The people along 66 are awesome man, everywhere,” Brenda said. “In every state everywhere. They’re great people. And I think that the people bring them back as well. I don’t think it’s necessarily all the road – I think it’s the people,” said Hammit. 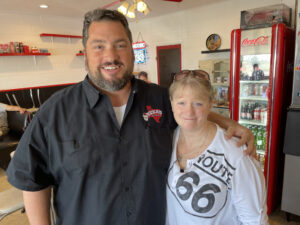 Brenda started as a cook at the Midpoint Café in 2013 and took ownership of the place in 2018. The diner has been a fixture on the famous road since the late 40s when it was called Zella’s Café. In the 60s, the owners named it Jesse’s, and then in the late 90s, it was discovered that the midpoint of Route 66 happened to be right outside the restaurant, and the rest is history.

“There’s only one midpoint on the trip and this is the perfect place for it,” said customer Mark Stahl from Wisconsin. 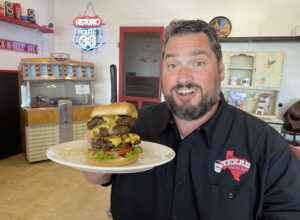 The nostalgia is also a big part of the roadside experience. “It’s nice to see how things used to be compared to how they are now. And it’s nice to help support some of the smaller businesses and stuff like that which almost got wiped off when they put the interstates through,” said Mark. 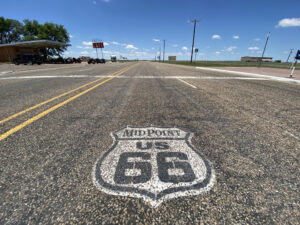 Nowadays, people come by to see Brenda, and even if you have no idea who she is, be prepared for a hug. She loves to give them and loves to receive them and is known for being a really sweet lady, just like her pies. “I always come for the pie and then we’ll get lunch. And then we’re like, “Why did we get lunch? We just wanted the pie.” But it’s all so good,” said Dawn, a regular customer.

There’s nothing more synonymous with America than Route 66 and apple pie, so if you want a serving of both, stop by the Midpoint Café to fill your stomach and find a friend.