The Texas Bucket List – The Broken Spoke in Austin

Update – On January 24th, 2021 Mr. White passed away.  Our thoughts and prayers are with his wife Annette and the entire White family.

Austin – Whenever James White takes the stage at the Broken Spoke in Austin, people take notice. Because when it came to building this Lone Start State icon, Mr. White knew exactly what it would take to succeed in the world of honky-tonks in Texas. “Well let me tell you what we got. We got cold beer, good whisky, we’re home to the best fried chicken here in town, and we got good country music,” James tells the crowd. 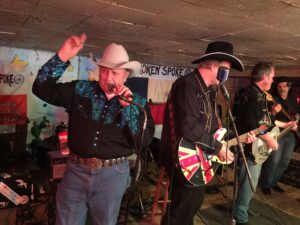 But before we got to the good times and dancing we sat down with the man who had a vision bigger than the city that seems to be spreading like wildfire around him. “My family has always lived in this area ever since 1836 when my ancestors came here and fought for Texas’ independence,” said James.  With his bigger than life personality, I mean he is a true Texan, James doesn’t have to look far to find his family roots.  Heck, he’s standing right on them. “I was born and bred right here in Austin, Texas,” stated James. In fact the only years James spent outside of our great state is when he served in the Army for three years in the 1960’s.  As soon as he finished his military career, James was ready to march to his own beat. “The day I got out of the army, September 25th, 1964, I started building the Broken Spoke. I got it open on November the 10th,” said James. 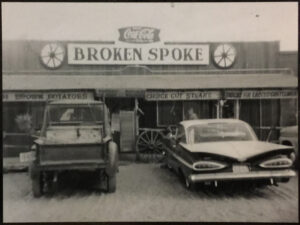 Half a century ago, this part of the Capital city looked a whole lot different than it does now.  Back then the Broken Spoke was off the beaten path. “All it was raw Texas land and there wasn’t another building on site. The city limit sign was like a mile down the road on the right, the city limit sign. Anyways, I thought why not build a place when I got a place. I visualized a place like no other and when it got it built, I named it the Broken Spoke,” explained James.

Despite being on the outskirts of Austin, The Broken Spoke expanded three times in its first two years of existence and legends like Leon McAuliffe, Ernest Tubb and even Bob Wills played here.  “He walked in through the front door, Bob Wills did, and they about fell off the bar stool. They started whispering they said ‘Man that’s Bob Wills!’ ,” explained James. But as the 60’s came to a close, James became close friends with an artist that had released 4 studio albums of his own. “1967 I started booking Willie Nelson and the Record Men. I only had to pay them 800 dollars back in 1967 and I booked them several times,” said James.

Willie became a regular at the Spoke and so did thousands of Austinites.  Over the years good times were had, countless songs had been danced to, and romance blossomed. “A lot of my friends said ‘Well hell I met my wife at the Broken Spoke,” stated James. And you can include James in the plethora of people whose love story started with a two-step.  It was during the early years that he met his wife Annette and unlike most country songs, Annette stuck around and she’s as much a part of the Spoke as James is. “My job anymore seems like I’m in charge of B Sing and PR and my wife is the working half of the family and we ain’t going to change nothing,” said James. 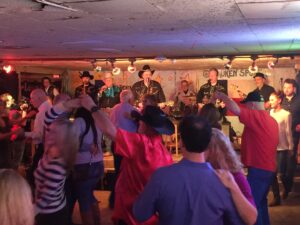 When standing on this old stage it’s hard to believe the amount of Texas sized talent it’s been able to support. “I had people telling me years ago why don’t you do this stage and why don’t you put carpet up here and why don’t you do this and I said ‘Hell Bob Wills was right here, George stood right here, Willie Nelson. Why would I change anything about this stage?’,” explained James. And the same goes for the dance floor.  Built on a foundation that’s seen generations of memories and magical moments it’s one of the few floors where dancing the night away can come true with a simple question. “I tell the men ‘Well the woman come out here to dance you know. All you gotta do is just go over there and ask them in a nice way would you care to dance. Give them a smile, give them your hand and take them out there.’ Well if it doesn’t work you just try to find another one,” joked James. And we just had to know if James still gets his move out on the floor with his lady.  “Well you know whenever she asks me to dance I know better get out and dance or she might kick me if I don’t. I still remember, this could have been after I poured the concrete on this floor after it dried that night, we put a few tables and chairs back here and we were the first. We were all by ourselves. We were the first ones to dance on this floor and that’s been a long time ago,” explained James. 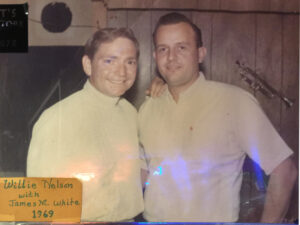 Time is a funny thing especially at a place as timeless as The Broken Spoke. For James, 1964 isn’t a distance memory it’s part of his life . “It’s been 50 years since that all happened and I’m still here. I was 25 year old and now I’m 75. After fifty years, sometimes you get to thinking darn it’s been a long time but sometimes it doesn’t seem like it’s been that long,” expressed James.

In a room James fondly calls the tourist trap, you’ll find all the special times the Spoke has been a part of.  It’s a walk down memory lane for James and as he tells each story, it’s like it just happened yesterday to this true Texan.  From pictures with the legends to the cowboy hats of country stars and presidents. “There’s one picture back here in the back that’s all the Texas Playboys and that’s Lean McAuliffe in the middle with his up right steel guitar,” said James while showing us the special pieces in this area.

Turns out it’s not just a honky tonk, the Broken Spoke is part of the life blood of Texas.  As the ultra-modern city of Austin grows around the shack that shakes 5 nights a week, it truly is the Spoke that sticks out.  You see there’s nothing broken here, it’s perfect sound, perfectly Texan in every sense of the word. “It’s a legend right here in Austin,” stated local Blake Hogan. “It’s about as Texas as you get,” said Emily Ussery from Beaumont. 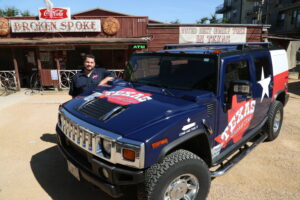 “Pictures of all the Legends are hanging up on the wall with your country music coming from the home. It’s a red rustical building with a dirt parking lot. There’s a big old oak tree by the highway that means quite a lot. If you like waltz and polkas, two step cotton eye joe. Deep in the heart of Texas, there’s a place that you should go. It ain’t fancy but it’s country. Wear your jeans and your cowboy hat. Just cross that old river cause that’s where it’s at,” sang James.