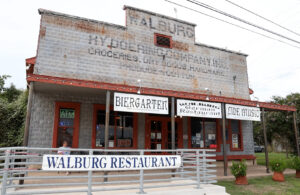 Walburg –When fall finally finds its way to the Lone Star State and October rings in the festival season, there’s no shortage of places to raise a pint or liter at. But up on the north side of Williamson County is Walburg, a small German community that’s got a reputation for having a good time. “You can bring your entire family from one to 99 out here and everybody’s entertained,” said customer Deborah.

Ronald Tippelt, the owner of the Walburg German Restaurant, hails from Munich, Germany. Ronnie said his parents made sure he stayed in school so he didn’t end up as a restaurant owner. But here he is, ending up with a restaurant anyway.  “all my family’s in Munich. I’m the only defector. They feel sorry for me. I feel sorry for them,” joked Ronnie. 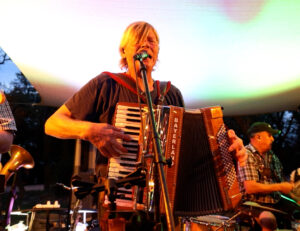 To say Ronnie enjoys owning this restaurant might be an understatement. This German party started off as an adventure for him back in 1987. It was then that a 27-year-old dude from Deutschland decided he wanted to start off an adventure in a German town that wasn’t in Germany.

What makes Ronnie’s place really unique is the authentic Bavarian buffet on the weekends, a boat load of German beers, a beautiful beer garden, and the fact that Ronnie himself sings to his customers. If you guessed yodeling is his specialty, you guessed correctly! Ronnie never thought his singing skills would pay off in the Lone Star State. “I played a few gigs and the people liked it. I said, “Well, I’m going to start going that. There’s actually money in it,” Ronnie said. 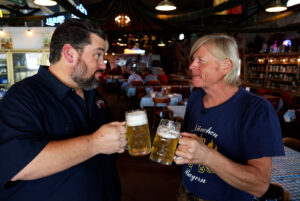 Craig Bond is the head chef at the Walburg German Restaurant, and he happens to be English. Turns out he married a girl from Texas who got him to leave jolly ol’ England for the finest place on the planet. Craig has been working in the kitchens for about 18 years, but he had a specialty for seafood. Thanks to Ronnie relinquishing his recipes to Craig, he’s now serving up sauerkraut and schweinebraten. He said, “Food makes people happy and this is the perfect setting and environment for people to do that.” 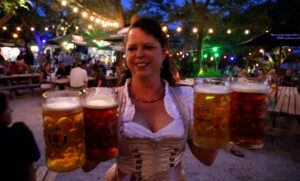 We always talk about bellying up to the bar, but for the first time on The Texas Bucket List, we decided to belly up to the buffet. The buffet had a combination of German and Texas favorites, and after putting together a plate the size of Neuschwanstein Castle, I was ready to chow down.

I headed straight for one of my favorite things – sauerkraut. With the nice vinegary taste and rye seeds, it was fantastic. Then onto the schweinebraten, wiener schnitzel, and finally, the brat. Everything was top notch and made my German meal complete!

If having some incredible German food or just toasting to the day is something you’re looking to do, coming to Walburg is well worth a stop on The Texas Bucket List!