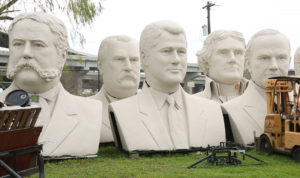 On an overcast Houston morning, the towering skyscrapers of the space city seem to reach for the stars, through the clouds, as the rush hour commute commences.  In a town where bigger and bolder go together, the skyline has some amazing architecture and it pairs perfectly with some huge works of art that are hard to hide. History is a huge part of the Lone Star State’s pride and culture, and for those who also subscribe to the adage that everything’s bigger in Texas, David Adickes’s art studio in Houston is the perfect destination. Showcasing some of the most massive sculptures in all of America, the studio is an outdoor exhibition comprised of hand-sculpted busts of some of America’s most iconic former presidents. “It’s hard to get rid of them. Yeah. Can’t bury them, got to have a big hole”, joked Adickes.  Texas artist David Adickes created these huge heads of state and has them stored at his studio which happens to be completely surrounded by superhighways, making it feel like you’re in a fish bowl.  “I feel like that also. It’s the noise that gets me, but inside you don’t hear it that much”, said Adickes as we moved into his building. 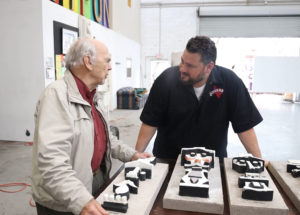 Born in Huntsville in 1927, David’s art has been around the block for a while and we’re not just talking heads. David’s talents have taken him all over the world and even earned him a personal friendship with President George H.W. Bush.  “I spent the night in the Lincoln bedroom as president Bush 41’s guest”, reminisced David. “Oh yeah. I saw him a lot, a lot of letters exchanged back and forth”, he said fondly.  David created the bronze of former President Bush that sits in the airport, but his art is not all about the biggest office in the land. He likes to create all sorts of sculptures, which has kept his long career busy and eclectic.  “Well, I have a condition called ‘bitimus chewicus’. Means biting off more than you can chew”, he joked. 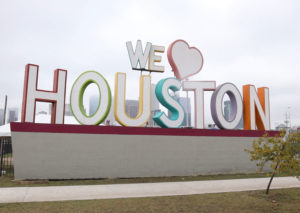 If you’ve ever explored H-Town you’ve probably come across David’s art. The Virtuoso in downtown, the Big Ol’ Beatles at the 8th Wonder Brewery, as well as the “We Love Houston” sign are all signature Adickes’ pieces and are also some of the most instagramed sites in the city. “Are you on Instagram at 93,” I asked him during the interview.  “I don’t think so. I don’t know what it is”, David replied with laugh. 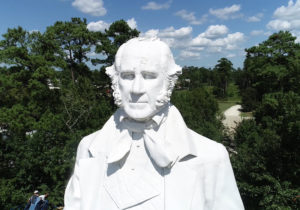 David’s biggest accomplishment, is just that. BIG. In his hometown of Huntsville stands a 687-foot-tall statue of Sam Houston, staring down the constant stream of SUVs on Interstate 45. It’s the tallest statue of an American anywhere, and it’s the tallest standing sculpture in the United States of a real person. “Why was it important for you to make Sam so big? Just because he’s bigger than Texas, I joked. “That’s part of it”, he said. “Plus we wanted to be impressive. We wanted to be iconic, so it is an icon”.

David graduated with a degree in mathematics and physics from the Sam Houston State Teachers College, now known as Sam Houston State University. He served in the Army Air Corps at the tail end of World War II and spent two years in France from 1948 to 1950.  It wasn’t until he spent this time abroad and saw the incredible art and architecture there that he knew he just had to try his hand at sculpting.  “That changed everything. I learned to speak French and chase French girls and caught a few”, he said with a reminiscing smile.  “Sounds like a horrible way to live”, I joked. “Terrible”, he responded quickly.  “How far out is your schedule right now? How many years in advance are you having work”, I asked considering his age. “From now? Oh, 10 or 15 years”, he said.  “So you’ll finally be done when you’re 108″, I joked. “I don’t do the math, but yeah”, he said with a smile.

Despite being 93 years young, David still makes his way up the stairs of his home to his artist studio to paint every day.  His sculpture work has slowed down significantly, and eventually his collection of heads will head to Huntsville for a permanent display. But for as long as he can, David plans on keeping his studio open, free of charge, to curious crowds looking to walk amongst his king-sized Commander-in-Chiefs.

“I’m flattered when people come and look at them. The whole point in doing them is that they are to be seen. If they were hidden someplace, there would be no point in doing them. Same with art, painting. As long as it’s in your closet at home, what good is it to anybody? You’ve got to get it out and be seen”, he said.  “It’s like reading a good book or hearing a good joke or hearing good music, it gives you pleasure. The pleasure is mine”.

So if you’re meandering around Houston anytime soon, make sure to check out the David Adickes Art Studio, and keep your eyes peeled for the rest of his iconic creations around town. As always, tune in with us next week for more must-see places, people, art, and music right here on The Texas Bucket List.