The Texas Bucket List – The Monolithic Domes of Italy

Italy— When it comes to living in the Lone Star State, there is no place like home. Big homes, small homes, homes in trees, and homes on the shore with a breeze. The Texas Bucket List has seen all sorts of places to call home while traversing the state, but there has been one dwelling we’ve really wanted to see, set right on the side of the road in Italy.

Now the country Italy reminds many of master artists, architecture, and buildings like the Coliseum, St. Peter’s Basilica and the Pantheon. But if you add Texas to the end of that Italy, things are a little bit different thanks to a massive amount of domes that call the Texas town home. 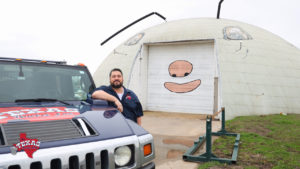 Gary Clark is a big believer in domed structures, because he is the general sales manager at Monolithic—the company that believes there is no place like dome. “Domes have been constructed for hundreds of years. One of the main reasons is they’re so immensely strong. The shape itself is super strong and one of the little known facts is you can cover more square footage using less building materials with a dome shape than with any other shape,” shared Gary.

Founded in Idaho, Monolithic moved to California in the 80’s and then set their sight on Texas in 1989. “Texas is really good for construction, friendly, and quite frankly the people are really super friendly here too,” added Gary.

Over the decades, domed homes started popping up, creating a unique scene on the side of I-35. The heavy concentration of curious buildings brings in all sorts of silly questions and people who take this method of making homes the wrong way. “We’ve had times where we’ve had people actually show up here and come in and under their breath say, ‘How do we join?’” laughed Gary, “I’ve often told people, ‘You see a bunch of standard homes built together. It’s a housing development. If you put a bunch of domes together, it’s a compound,’” he joked. 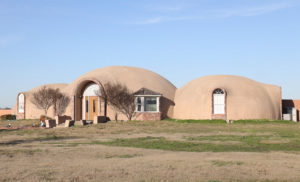 Now the domed structure that sticks out and got us to stop by is the colossal caterpillar that has been a curiosity since it was built back in 1995. The caterpillar structure is lovingly referred to as “Bruco,” the Italian word for caterpillar. “The way we construct our domes involves an air form. What most people call a balloon. And the one for Bruco was 250 foot long by about 25 foot high,” explained Gary. This caterpillar structure actually holds a large role within the company. “Welcome to Bruco. 250 foot long, 60 foot wide at the widest point and 24 foot high…This is where we assemble the air forms that we use for making the domes,” he said.

Every building built by Monolithic starts in this building as a giant inflatable.  “We prefer the word inflate.” Inflate. “We don’t like to blow up or-“ Yeah. That’s a bad word. Yeah, you inflate a big balloon. The first coating is what? “Polyurethane foam insulation.” So that’s kind of like what keeps it energy efficient. “That’s right.” Polyurethane foam insulation makes up the first layer, keeping the domes energy efficient. Rebar and concrete complete the construction of the dome structure. After that, it can pretty much be anything you want. “Everything from fertilizer storage to high schools to businesses, churches, homes… We have a dome gymnasium here in Italy, Texas,” said Gary.

While art and architecture can be subjective, the science of these structures isn’t. It’s a design that is proven it can stand the test of time. “The Pantheon is 140 foot diameter and has been there for hundreds of years. When they built the Pantheon, they didn’t have rebar, they used vitreous China. They fired China and used it as the reinforcing it. And it’s still there. It’s still in use today,” he explained.

So if being dome on the range is more your style, a stop at Monolithic to see the dome structures of Italy, Texas is well worth a stop on The Texas Bucket List.  “What we really are excited about is when they come here, they learn about why we’re doing, what we’re doing, and as we share our ideas and the technology that we have, all of a sudden it’s not as crazy as they think,” concluded Gary.