The Texas Bucket List – The Blueberry Place in Nacogdoches

Nacogdoches – Amongst the towering trees of east Texas sits a field full of frolicking furry creatures.  Where butterflies gently flap their wings waiting for just the right summer breeze to lift them off for a flight and folks get their fill of fine fruit.  “It’s just beautiful. It’s a beautiful peaceful place,” said Sherrie Randall.  Sherrie owns the Blueberry Place, a farm hidden in the woods near Nacogdoches and we when pulled in to pull some blueberries off the bushes, we didn’t realize how beautiful this place is. “Mm-hmm, they’re very healthy, healthy bushes,” she said. 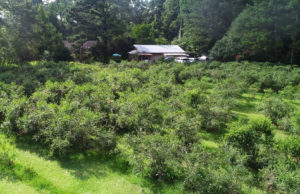 Before Sherrie was the boss lady at the Blueberry place, she had an aerospace career in Colorado that kept her eyes to the sky. “We work behind the doors… Secret stuff, yes…[Not allowed to talk about it] But it was fun stuff,” she said. Sherrie retired from the industry with her husband in 2001 and they wanted the perfect place to put up their feet. “East Texas is gorgeous and it’s a lot like Denver with the trees…Just flat,” she laughed.  When they found this field full of fruit, they fell in love but continuing to cultivate the crop for the crowds wasn’t something they expected to do. “We weren’t going to keep it, we thought, ‘Well we don’t have to do that, because we weren’t looking to do that,’” she said. Apparently, the town felt a little differently about the fate of The Blueberry Place. 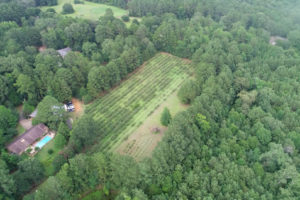 “Closed on this place on a Friday night and Saturday morning there’s all these people out here picking blueberries and it was the Kiwanis club picking blueberries for the pancakes for the festival. It’s like the town’s patch…So we ended up having a blueberry farm,” explained Sherrie.  Overnight, Sherrie and her husband unexpectedly became blueberry farmers. “After we bought this, I answered the phone and this lady said, ‘Are you still open?’ And I said, ‘Yes.’ She goes, ‘Oh we heard it was bought by old people.’ And I said, ‘I am the old people, I just have a young voice,’” she laughed.

As summer kicks off in the Lone Star State, people come from far and wide for the few short weeks to take a stroll and get their fill of fruit. “June [is the key time to come]. A lot of times by July 4th we are closed,” explained Sherrie. “[Only about] a month, month and a half… Then I get my privacy back.” While Sherrie jokes about her visitors, if you happen to run across the retired blueberry farmer during your stay, she’ll talk to you till she’s blue in the face because somehow, these blueberries bring people together. “You make a lot of friends, it’s like old home week when people come back… Especially when you get older, we made it another year. So it’s really cool,” she explained. 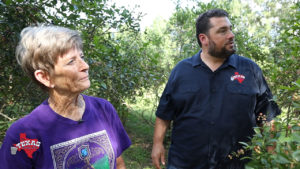 “It means a lot…for a small town, to have something like this to do,” said local, Britney Castle.  “I can’t really think of not having a blueberry patch down the road,” added customer, Nick Jacobs. “Mid-season are the clumping berries, so you can walk up and just find a big clump and you’ll get several berries at once,” said Sherrie. The bushes at The Blueberry Place aren’t treated with pesticides, so they are safe to eat while you pick.  “They taste like candy, coming off the bush they’re sweet,” said Nick. “There’s a lot of people that don’t realize, they have never seen a blueberry bush and they’re so different. They’re sweeter, especially here,” said Sherrie. 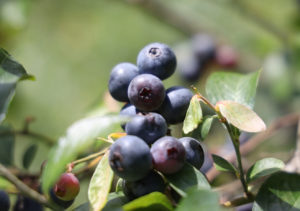 A pound of blueberries will set you back a buck fifty here but remember, you’re doing all the work. “We made everything so it’s self-serve. They drive in and they get their harness, their bucket, their bag, and they go out and do their thing, they pay and they don’t ever have to see us,” explained Sherrie. As you might imagine, this is very popular with the kids, and parents, well they love it too. “We live in town, so it’s nice to come out here and let him [her son] just be in nature really,” explained Britney. “Oh it means that I can wear them [the kids] out and they’ll go to bed early, it’s awesome. And they’re eating fruit, so it’s a twofer on that one,” confirmed Nick.

While it may take a while to fill your bucket, picking and partaking in blueberry binging at The Blueberry Place is well worth a stop on The Texas Bucket List. “If you can come out here and enjoy God’s creation, this is one of the best places to come do that,” concluded Nick.