Bellville— For the 175th episode of The Texas Bucket List, we decided to check back in with an old friend. Back in 2013, 174 episodes ago, we went to Newman’s Castle in Bellville. Mike Newman built this big home and since we last visited he’s added on to the place, so it’s time to check it twice! 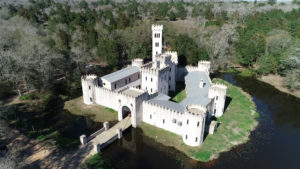 The bustling streets of Bellville can be a little backed up during the morning rush hour, just like the bakery case at Newman’s Bakery. Mike Newman owns the perfect stop for pastries that we visited back in 2013, but we didn’t come back just for breakfast, even though it is really good. We came to besiege his big ole castle. “Well, welcome again… I noticed I’ve seen you in my donut shop there on numerous occasions for these last seven years,” said Mike. After being busted by the baker, it was time to switch the subject and talk about his sizable stronghold he built himself. “Well, it goes with the deal. I kind of like it and I’m having a good time with it still. And I see that it brings a lot of joy to people,” he said.  And yes, he’s still making mead. “You want some?” he offered.

Six days a week, Mike gives tours of his towering fortress hidden in the thicket of Austin county. The groups have grown over the years and Mike has even built onto his castle with a bell tower and some soon to be finished guest rooms. As for the medieval toys that take this place over the top, Mike still has those too. “This is my medieval cannon,” said Mike. A popular part of the tour, the trebuchet still turns heads. “I’m still having a good time. Especially, if you see other people happy, it’s easy for me to appreciate that…The [positivity] that comes from it from my point of view has been, wow, thank you Lord. You know, it’s just like a gift from above,” he said. 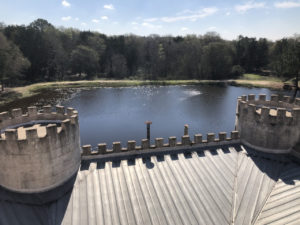 Kids continue to charge the castle, fight fellow knights, and look for lurking dragons, but there was one thing Mike’s castle was missing— a maiden. “Oh Yes. Miss Sia… or Lady Sia. She doesn’t like the word Miss Sia too much. In case, you mispronounce it, you know,” said Mike. The mock monarch finally met his match. “What? He’s not a King? You’re kidding,” joked Sia Beaton. Sia is a singer who happened to be at the castle for a Celtic celebration when her friend suggested she make up a song dedicated to Mike’s manor. “Sure. I’ll write a song for the castle, but the King has to listen to it if I do…Yes, he had to come and sit down and listen to me singing my song,” she explained. Mike decreed it. “It makes me smile whenever she sings it,” said Mike. “It’s a cool song. You should get her to sing it for you…”Sia’s song is the perfect soundtrack for a castle in the middle of the country. “Sia is a great lady. I’m glad she’s in my life. She’s very special,” Mike added. 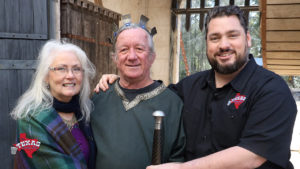 While the King has grown a bit older over the years…“I will be 65 this year, so I need to figure out about this Medicaid,” he said. Mike’s still a big kid at heart. Bringing joy to others is what this big home has become about and now the King gets to reap the rewards. “It was funny the first time we came out here, all we could think about is how awesome his bachelor pad is… I don’t intend to change it. You just don’t mess with perfection,” said Sia. “I’m not the only castle in Texas. There are others, but I think mine is the coolest one though,” said Mike. “Every time he does the tour, I watch it and get completely sucked in, like it’s the first time I ever saw it,” claimed Sia. “I’m very happy to be from here and I’m very pleased and honored to have so many people come out here to my castle to see it. But then there’s a great overflow of that because they get to spend a little time here in a small community, here in Texas,” concluded Mike.