Nacogdoches – Considered to be the oldest town in Texas, Nacogdoches is loaded with Texas history.  But if you want a burger loaded with toppings, head to one of the oldest restaurants in town— Butcher Boys. “They started making hamburgers, I mean, you could smell those hamburgers all over the county,” said customer Jan Castillo. “The…number one burger place… and they’ve lived up to that reputation,” confirmed another customer, Marsail Warner. “These restaurants, if you run them right, they’re tough. I always say you got to marry them,” said Billy Huddleston. 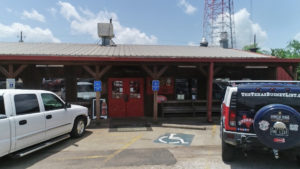 Billy moved to the middle of east Texas for a morbid reason. “Came up here to a funeral, liked it, and moved up here,” said Billy. He fell in love with the little town and being a butcher by trade, he opened up Butcher Boys in 1977. Now this isn’t our first stop at a hot spot run by a Huddleston here in Nacogdoches. Back in season two of The Texas Bucket List, we met Billy’s son, Billy Junior, at Nacburger. “We have a rule here when my kids, their eyes clear to top of the meat counter, they come to work. He worked all through school and everything. Then, all of a sudden, one day he come up and said, ‘I’m going in business for myself.’ I said, ‘Well, go for it.’ He’s doing real well,” said Billy.

Junior learned from the butcher master because when Butcher Boys first got started at, things were a lot different. “When I went in business, we’d bring in half the cows in the back door. Now, it comes in, in little boxes, already ready to go. Some of it was hard for me to accept,” Billy admitted.But that doesn’t mean they skimp on quality. “I was always taught to serve the best quality you can, and treat your customers like they’re your best friend, and I do,” he said.

Except for the one time he tried to start closing the restaurant earlier than normal for some personal time. “I decided I was going to start closing on Saturday at four o’clock so I can go fishing. They were calling my house. ‘What is wrong with you?’ Boy, when I closed at 4:00, that was a sin,” said Billy. 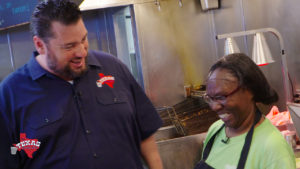 “You couldn’t work for a better person than Mr. B,” said Commella King. Commella has been working at Butcher Boys for over 20 years. She’s popular around these parts, everyone seemed to walk in waving at her. “Ah, yeah. I love my customers,” she responded. She led the charge on a burger we’re calling The Texas Bucket List Burger. Something we made on the fly with blue cheese, bacon, and mushrooms. It all begins with the beef.

“We use a one-third pound scoop… We going to do a double meat… Almost a pound of burger. You better come here hungry, when you come here,” she said. The bun is toasted while the mushrooms are grilled. Blue cheese and bacon are added and the bun is finished with your typical toppings. “Now, that looks delicious… Look how beautiful that is,” she admired. When it came to choosing a side, Commella twisted our arm. “Golden, delicious onion rings,” she said.

It’s always good when we bring back the burger and Butcher Boys knows how to cook them. The burger has a terrific taste. The blue cheese gets mixed in with the toppings—the mushrooms and the bacon, coming together for a flavorful, unique burger. “You’re just like, ta-da. You made it. It’s like a home run of the day,” said Jan. 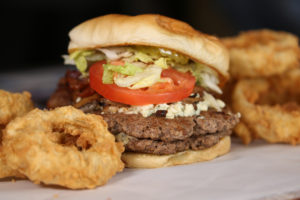 This large burger is well worth a lunch for any lumberjack. “They’re very filling, they’re juicy, and they’re made really well,” added Marsail.

We can’t neglect Camilla’s onion rings. They taste as great as they look! Most onion rings, the entire onion is ripped from the breading with a single bite, but that’s not the case at Butcher Boys. They’re perfectly cooked, crisp and delicious.  “Oh, my gosh. Yeah. Their onion rings are to die for. I mean, you could just live on those,” raved Jan.

Well, if you ever happen to be in the oldest town in Texas and you need a big old burger, Butcher Boys is well worth a stop on The Texas Bucket List. “You don’t want to run afterward,” warned Marsail.  “We like it, and we love it… it’s local people and we’re supportive,” said Jan.