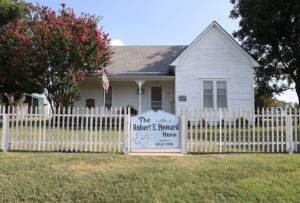 Cross Plains— Cross Plains is by no means a massive town in Texas. With less than 1,000 residents, it’s sort of like the plains you cross to get to Abilene, Comanche or Coleman. If you take some time to stop at a house in the cross hairs of Cross Plains, you’ll find out that this little place has had a big influence on the whole world thanks to a man named Robert. E Howard.

“He knew he wanted to be a writer real early on. He just had that creative streak,” said Arlene Stephenson.  Arlene is a volunteer at the Robert E. Howard Museum, housed in the original house Robert E. Howard grew up in and wrote his many works. We’re not talking novels of non-fiction, Howard had one heck of imagination. “I guess you might say, he was almost a nerd before nerds had been invented, type thing,” said Arlene. “Complex probably as they come, but I think most creative people probably are. His mind just ran in so many different directions.” 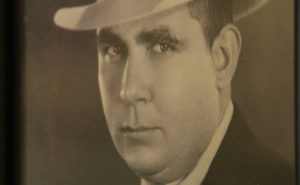 Howard is considered the father of the sword and sorcery style of writing, thanks to character he created called Conan. This style is prevalent today in trending things such as Game of Thrones or Dungeons and Dragons “A lot of that could be traced back to influence of Howard’s writings,” said Arlene.

An avid reader of pulp magazines as a teenager, Robert submitted a story for consideration and by the age of 19, he was being published in Weird Tales Magazine. Fantasy wasn’t his only forte, Robert wrote about boxing, westerns, adventures, pretty much anything he put his mind to.  “He was actually making more money at a penny a word than probably anybody in town, except a banker,” explained Arlene. “He was the breadwinner, if you look at income cash.”

In December of 1932, Conan made his first appearance and created a whole new genre.  “He had a major influence on a whole lot of what we’re seeing today and they are making great inroads in getting him [Howard] more accepted broadly as a literary, not just one of these pulp writers, but more of a literary genius,” she said. Part of the museum is Robert E. Howard’s bedroom, the site in which his famous works were created. “That’s where it happened… That little old tiny room, six foot wide,” said Arlene. 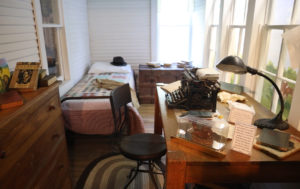 Robert lived in this home with his family until the age of 30, when tragically he took his own life. Though he has passed, his legacy lives on today in his creative works. “Bran Mak Morn, Solomon Kane, El Borak, Steve Costigan, Breckinridge Elkins… And Conan. He didn’t call him Conan the Barbarian… Somebody else stuck that on there, somewhat later. But in Howard’s pure writing, he was just Conan,” explained Arlene. Well the Robert E. Howard Museum wouldn’t be complete without the writings of Robert Howard.

All the Conan stories can be found in three of his books, but be forewarned, they are not categorized as light reading. “That was his writing. I would say he was very verbose,” agreed Arlene.
Robert never got to see Conan in the comics or the incredible flicks from the 80’s, but we should have known that deep down, Conan is a Texan. “Started right here in Texas and ended right here in Texas. But oh man, it’s gone a long way…” she said. 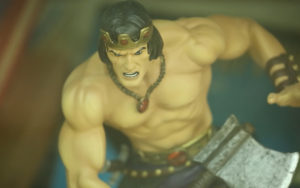 While the films were fun, the real reason to visit this small home is to understand the amazing influence Robert had on the literary world and the world of fantasy, something that Arlene comes to realize at every annual Howard Days celebration in June.  “So everybody who is here during Howard days that speaks another language gets out there in the front porch and they take turns reading Cimmeria,” she said. “One year, I think we had nine languages represented up there. And all right out here in this front porch. Twelve feet from where it was written in Cross Plains, America. We do good to understand Texan here!”

“He was a pure Texan, that created from a Texas environment, influenced by Texas and just kind of went on to conquer the world,” concluded Arlene.