Texas City – Texas City is a town known for refining, but over in downtown, you’ll find a refined place for folks who like to puff their own smoke called El Cubano Cigar Factory.
“We’re one of the few that do everything the true traditional Cuban style,” said Manny Lopez.  Manny started this business venture and there is one thing he wants to clear up.
“My life is not everyday smoking cigars, and drinking whiskey and rum,” he claimed. Could have fooled us! 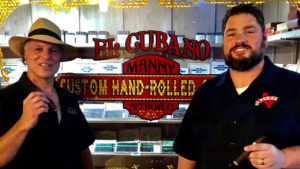 “Come on in to the El Cubano cigar humidor where we keep all of our El Cubano cigars that are ready to enjoy… what’s unique about us here at El Cubano Cigar Factory, since we are a cigar factory, we only sell the cigars that we make. So, every cigar that you will find in this humidor, which is over 100 different cigars, are all handmade here on the premises,” he said.  Now these aren’t 5 cent cigars, but they’re a bargain that comes with a bonus. “Cigar’s $7, the hour therapy is free,” said Manny. 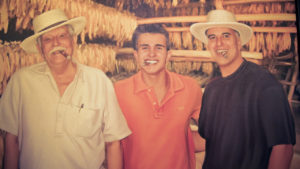 Manny’s family hails from Cuba and has a long, rich tradition of growing tobacco on the island nation since 1904. That is, until Castro took over and instituted a new way of doing things.
“Basically they come in and take over the property and then you can work for them at a very minimal wage and stuff like that… That happened to many families, where all their property was confiscated by the government. And most people left at that point because there was no need to be there and be exploited by the government,” he explained. “The realities of socialism and communism that a lot of people don’t quite understand.”

Manny’s family escaped to America and initially landed in Florida. “In Miami during that time, there wasn’t a whole lot of work. It was a small, sleepy town… Then all of a sudden you had 250,000 Cubans that had immigrated in because of the revolution… So, there was a job opportunity for my father here in Texas. And we came to Texas, and to Houston, and been here ever since… it’s our home. And we’ve done well here, and it’s provided great for us… Proud to be American,” said Manny.

Manny’s father, Manuel would occasionally trifle with tobacco. Since they had a history of it in their family, they decided to open El Cubano Cigar Factory. “Been such a big part of our family that it was taught to me at an early age because my dad always rolled his own cigars. So, he taught me from seven, eight years old about cigars and the culture, and what it’s involved, and what it’s all about,” he said. Most dads teach their sons at that age about baseball. “That’s it. That’s it. I played a lot of baseball,” said Manny. The real homerun here is the family tradition of rolling smoke. 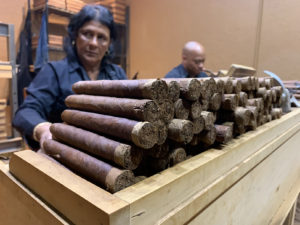 “We do everything the traditional way, the way my family over the generations have done it, back in the early 1900s and mid 1900s. So it’s a very unique way of rolling cigars and it enables the cigar, gives it a little bit different burn, a little different flavor profile… Something with a lot of Cuban traditions in it, but it’s actually rolled here in Texas,” stated Manny.

The craft of hand rolling Cuban cigars takes a lot of expertise. “We use three different types of filler in every cigar that we make. We may use a seco for combustibility, we use a viso flavor for aroma, ligero for strength. So she’ll take that in each leaf… it’ll go into the mold where it’ll press for about three hours on average. And then we’ll pull it out, and we’ll add the outer wrapper… Where all the leaves are placed are very important so that you get proper combustion with the cigar. You’re darker, richer tobacco will be in the center of the cigar. And then around the exterior will be your lighter, your seco, your faster burning tobacco, and that will kind of help keep it burning properly,” he explained. 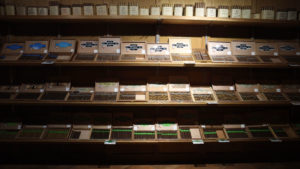 When it comes to picking out your handmade cigar, the options can be a bit daunting, but Manny is there to guide you through the haze to pick the perfect stogey. “The different color labels will designate the country of origin of the tobacco that we used to make the cigar… Our white label for example, that’s our Ecuadorian blends… Nicaraguans will be red…Blue label’s our Dominican blends. Our green labels are Honduran. We have the Manny Limited, which is a very unique cigar that we make. That’s the only cigar that we make where all the tobacco is from one country. It’s what we call a puro. It’s a Nicaragua puro. All the tobacco comes from different regions of Nicaragua. We have the Manny Special, which is our gold label. And then we have our Manny Anniversary, which is our silver label,” he explained. A couple of cigars really stand out, mainly for being really large, like the Gran Corona and the Gran Presidente. “Well that’s when you have a lot of time on your hands… that’s a Gran Corona in the Manny Limited. That is a 49 ring gauge by nine and one quarter inches long….[And] that’s the Gran Presidente, the Grand President. That’s a seven inch by 70 ring gauge there. That gives you about two and a half hours to three hours of smoke time there…Great for golf…and the football game,” he joked. “My name’s on every cigar. It says Manny El Cubano Lopez on every cigar. So I take a lot of pride in that. And when somebody smokes one of my cigars, I want to make sure that it’s the best that I can possibly make,” he said. 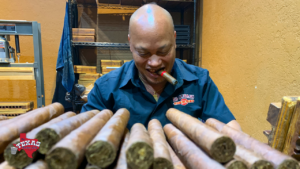 Once you’ve picked out your cigar, the conversation and comradery of the lounge is where this experience truly gets its full flavor. “Our culture here is about maybe a little bit of music in the background, but it’s more about conversation. I want to create conversation because I want to learn about you. I want you to learn about me. I want to know about your family. People come in here, I know their spouse’s name, their kids, what they do, what age they are, and all those things. And that, to me, that’s very important,” said Manny. “I don’t ever plan on being the biggest cigar maker in the world, but I’d be very content being the best cigar maker in the world,” he concluded.