Texarkana— The Northeastern corner of the Lone Star State is an interesting blend of states’ cultures coming together to make one major melting pot of town. The city of Texarkana sits right on the state line and is home to some unique food. 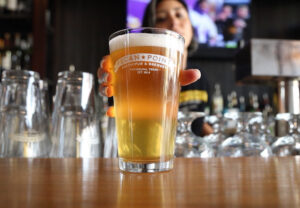 “I was born on the Arkansas side… As soon as we could get out of Arkansas, we were in Texas,” said Bill Scurlock. Bill may not have had the option to be born in Texas, because the hospital was on the Arkansas side, but he did have his choice of where to open his business, and he chose Texas. Still, his restaurant, Pecan Point, sits very close to the border. “Right down the alley is one block… then that’s Arkansas,” he said. Bill was a former magazine publisher, but got into the business of beer out of personal interest. “I was a homebrewer for several years and I wanted to brew my beer and sell it. I mean, that simple. I wanted to share it, but I also wanted to sell it. I thought it sounded like a cool thing,” he explained.

In order to get into the beer business, he had to jump through some hoops, and in a town like Texarkana, that can be tricky. “To sell beer on premises in this town you have to have a restaurant or a private club, but I didn’t want to do the private club thing. So, if we’re going to have a restaurant, I want to have a nice restaurant,” he said. Well we’re glad he opened Pecan Point Gastropub & Brewery, because it has some truly tasty offerings.“You can get the same old thing at a lot of places in Texarkana. There’s a lot of restaurants, but there’s very few places where you get truly unique food,” said Bill. 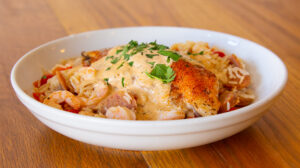 He wanted to make his restaurant different, which can be seen in his unique take on jambalaya. “It’s not your traditional jambalaya. It’s kind of our twist on it… We like to do food that’s familiar but different,” said Samantha Tompkins.  Samantha is the executive chef and she got things started by throwing onions, bell peppers and cherry tomatoes in a skillet with a bunch of butter.  Being so close to four different states, Samantha is used to getting all sorts of opinions when it comes to her cooking. “There’s a lot of different people that come in here with all kinds of different perspectives,” she said. “I’ve got a guy that grew up in Louisiana. His grandpa had a restaurant in New Orleans, and so a lot of the times when I’m cooking more Cajun leaning food, I’ll give it to them to try and like, ‘What do you think of it?’ And he’s like, ‘Oh, well it’s not blah, blah, blah.’ I was like, ‘I’m not trying to do traditional. Just is it good?’ ‘Yeah. It’s good.’” Next up is some blackened catfish. The veggies get some white wine and seasoning before moving on to our other proteins, which includes shrimp with pork and alligator sausage.  “I like using this instead of the traditional Andouille sausage… Still has a great Cajun flavor cause the alligator and the spices that they use and then we poach it in our beer here. We use a Hefeweizen or a wheat if we’re out of the Hefeweizen… It gives it a really nice flavor,” she said. Add in some rice and our lunch starts taking shape. “People are going to look at you crazy if you tell them this is jambalaya but… it’s our version. It’s a secret version…I love using the fresh tomatoes instead of like a canned tomato for the sauce. It just, it’s a little nicer,” shared Samantha. Plate it, put some fish on it, finish it off with remoulade and we’re ready. “There you go. Jambalaya in Texas on the Arkansas state line,” she announced.

Pecan Point’s unique take on jambalaya is a combination of blackened catfish with some big tomatoes, onions, and peppers. Here’s to a crazy combo of cultures right here on the state line. “Food is really phenomenal,” said customer, Andrew Gutierrez. It’s a really different infusion of flavors with that pork and alligator sausage, along with the shrimp and blackened catfish. “The kitchen does a marvelous job,” commended Bill. The sauce definitely holds this dish together. A good buttery sauce with grilled onions and peppers. “It’s very unique and very good,” added Andrew.

Well, if you’re looking for a different take on jambalaya, a trip to Pecan Point in Texarkana, Texas is well worth a stop on The Texas Bucket List. “I feel like if you’re not trying to make something your own, why bother? Right?” said Samantha.