San Antonio — If you ever find yourself on the north side of Alamo City, just down the road from the airport, you might notice a certain smell. This aroma isn’t the sort of scent you’d expect to sniff out around these parts but if end up on the right side of Rhapsody, you’ll find the coffee culprit putting the perked perfume in the air. 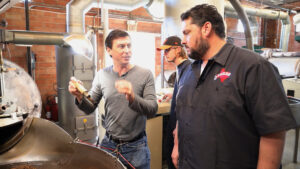 “I know lots of people that don’t drink coffee for one reason or another, but I’ve yet to meet a person who says, I hate the smell of coffee… It just hits a certain part of your brain. It’s like chocolate,” said Tony Chbeir. Tony has a nose for all things that smell good, especially coffee because that’s his business.  He and his brother, Sami, are the caretakers of a company their father, Roger, started back in 1979 called What’s Brewing. “We take coffee serious, but we don’t really take ourselves too serious,” said Sami.

The business got started with Roger’s love for coffee. Being a native of Lebanon, he had a hard time finding a cup of joe that met his standards back in the 70’s, so he began roasting his own. Today, Tony takes care of the business, which includes the coffee bar and pinball games, while Sami procures the kernels that create the coffee and tests them in his lab. “We wanted to have that kind of Willy Wonka and the Chocolate Factory with coffee,” said Tony.

Not only can visitors taste coffee from over 30 different countries at What’s Brewing, but they can also see, smell, and experience the roasting process.  “Countless variables go into what makes a coffee, coffee,” explained Sami.  “He [Sami] really took coffee to the next level when Dad stepped down. So, Sami is definitely the coffee scientist,” Tony confirmed. What’s Brewing has their own in house roastery, used to carefully craft their coffee from unroasted green beans to cup.

“We’ve got all these coffee bags. Each of these are 60 kilos or 70 kilos. So they weigh up to 154 pounds…. The raw coffee… is called green coffee. This is a natural prep Honduran. It actually has a fruity flavor because the fruit is dried on the cherries before they’re processed. So when you roast it, you actually taste that fruit,” explained Sami. The particular coffee we tried is from a small farm in Honduras.  “We went to Honduras to source this coffee. We tested it on the farm and made sure that it was something that we wanted to buy and then we bought the entire lot. It’s all coming from one farm,” said Sami. 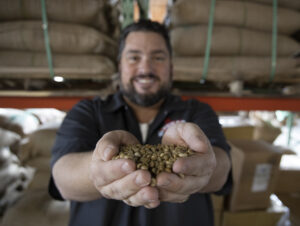 Jake, is the roaster at What’s Brewing. A coffee roaster is sort like a big dryer, and at this point of the show you really wish smellovision was a real thing. “The caramelization, that smell, is when the coffee is done. Each coffee has a different profile, different flavor notes, that you have to be able to smell. This is a Honduran, this is Ethiopian, this is Colombia. That’s what Jake does. He just smells this coffee, and he knows when to let it out,” continued Sami, “Jake’s got a good nose for coffee.”

With coffee beans from 30 different countries, this process brings out all sorts of flavors. “It’s just like a grape. A grape is going to determine what the wine tastes like, but then it depends how you ferment the grape. So that’s kind of like when you’re talking about the roasting process, it’s more about how the coffee is developed. It’s just a much shorter period of time than a bottle of wine. You don’t have to let it age for six years before you drink it. Don’t do that with coffee,” said Sami.

Even the weather plays a roll with roasting beans. “So if we have a storm roll in, the same coffees might roast differently, and you have to be able to adjust based on the environmental situation…You have to take all that into account. It’s going to take longer to cure,” he explained. 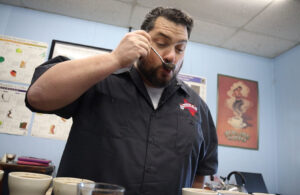 Now all these beans are tested by Sami and his lab is right next to the game room. Sami sips on coffee at all hours looking for the best of the best. “He’s here till sometimes to 12 o’clock, one o’clock in the morning, just trying different coffees to find the best one to put in the back,” confirmed Tony. Before the coffee ever reaches their customers’ cups, it is tested for quality. “We’ve got five different coffees here, three cups of each coffee, that we’ve roasted in a specific manner for a quality evaluation,” explained Sami. In a process called cupping, the first thing that’s tested is the dry aroma. “What Jake and I are going to do is we’re going to go through and we’re going to smell each of these,” said Sami. “The immediate reaction we get to these… we’ll write that down.” Then the smell of the coffee is tested again after being brewed. “Some coffees just really, this is where they blossom,” he said. And the final step, tasting the coffee and this gets a little crazy.  “It’s like wine tasting, but with coffee,” Sami compared.

If coffee roasted right here in the Lone Star State is up your alley, you should see what’s brewing at What’s Brewing, the perfect place to wake up and smell the coffee on The Texas Bucket List. “Between the family, the pinball, the roasting, you get to see it all,” said Sami. “There’s a hundred good places to get coffee in Texas, but there’s not a lot of places that have pinball and coffee and you can see it, the roasting operation going on,” concluded Tony.