GOLIAD – Goliad is a sacred site for Texans.  Presidio La Bahia was our first stop on The Texas Bucket List a few years back, but across the river from the famed fort is another stone structure that was built at the same time back in 1749.

“In the 1700s, Spain came to Texas when it was wild land,” said Brenda Justice, Superintendent of the Goliad State Park and Historic site. “It’s a lot of fun working here. It is hallowed ground. It’s a very special, beautiful place,” said Justice.

The site includes Mission Espiritu Santo, the ruins of Mission Rosario, and the El Camino Real Visitors Center.  So, we think this place may require at least three or four stops on The Texas Bucket List! 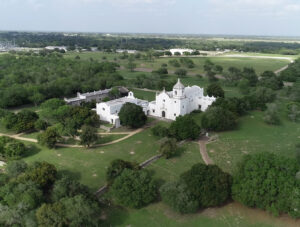 It all starts on the banks of the San Antonio River with Mission Espiritu Santo which back in the 1930s was a pile of rocks until a local judge decided it needed to be resurrected from the rubble. “It was used for different functions until in the 1930s, when Judge White, our local county judge of Goliad County worked really hard to get the National Park Service to designate it a national park. When that happened, that is when the Civilian Conservation Corps- they were able to come in and restore it,” said Justice. 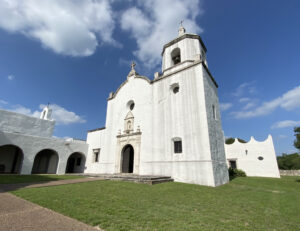 The craftsmen who came to restore the mission were predominantly World War I veterans and first built the cottage to have a place to stay and to brush up on their Spanish architecture.  “This is The Keeper’s Cottage. Construction was finished in 1937, and this is where the architects of the Mission Espiritu Santo Reconstruction worked.  They lived here and this was actually in essence their proving grounds. They got to experiment on architectural style and practice their trade before they went and lay their hands on the historic Mission Espiritu Santo,” said the parks lead interpreter Cody Edwards. “What you see here is the culmination of visits throughout our nation and even into Mexico of Spanish Missions. This is where they experimented with their craft before moving onto the real deal,” he said.

It took six years to finish the mission, but once completed the site had the same sacred feel as it did back in 1700s. 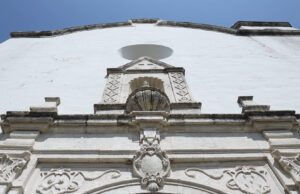 “The Spaniards, the Franciscans especially, had a very particular style. I think you can see it in the arched rooms and even the roped walling up there. Arch supports and things of that nature, they tended to be very ornate, and that is definitely something that’s visible here too,” said Edwards.

The mission was home to the Aranama Indians. “Their reconstruction efforts really gave us a better view, a broader view of what life in the Mission might have been for Aranama Indian,” said Edwards.

“When Mission Espiritu Santo was built here in 1749, at its height it had over 300 or so natives living in the site. It was kind of like its own little town. They did all kinds of spinning and weaving and whatever they needed, like a little city to survive. They taught them their way of life, the Spanish way of life, and they provided food for their families. They had a shelter over their heads. There were incentives to stay in the Mission. When it was good times and the animals were abundant, the hunting was good. They could leave and they just wouldn’t come back,” said Justice.

Converting the natives to Catholicism and providing them a place to stay was not the only function of the facility.  Mission Espiritu Santo also happened to be the first mega cattle ranch in Texas. 40,000 heads of cattle grazed around the mission in an area bigger than Delaware. “That’s really interesting. You never think about missions and cattle herding,” Shane McAuliffe, host of the Texas Bucket List said. “That’s true,” Justice said. “That’s where they had Vaqueros, the Indians and the natives that learned to be vaqueros and cowboys, and they would go out and take care of the cattle and such,” said Justice. “They were strong and rugged cattle that … today you see Longhorns, which were kind of the remnants of that Spanish cow that they brought over from Spain,” she Justice.

The mission closed in 1830 and lasted 81 years but connecting to this part of Texas history helps you understand just how long the Lone Star State has been explored by European settlers and how they helped shape our identity as Texas. “To know that this was one of the first places that Europeans came through, and they tried to establish colonies and such and mission sites-That’s my favorite part. I love it,” said Justice.

“Goliad’s State Park & Historic Site to me is all about identity and protecting the legacy of what came before us. That is central to being Texan,” said Edwards.  “To me personally and professionally, this is a bucket list park for me to work at. To know this site is to be a better Texan, in my opinion.”