WACO – When it comes to visiting Waco, most people have one thing on their minds.  Chip and Joanna ring any bells?  Well, seeking the sought-after silos has also brought business to town and that includes Vivia Charles and her son Aniceto who moved to Waco in 2018. 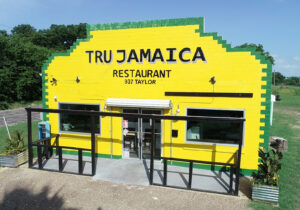 A native of the island of Jamaica, Vivia owned another Jamaican restaurant in northern Virginia when she felt compelled to come to Waco after seeing it on TV to bring her unique culinary creations. The family scoured the internet learning what they could about the heart of Texas and eventually found an abandoned restaurant, complete with murals from local art legend Ira Watkins. But this building was still a real fixer upper. “The internet is a wonderful tool. So we were on Google Earth continually and then we saw this place. There were three palm trees and it was up for sale. I mean, that was pretty much like, hello, this is where you guys should open your restaurant,” said Vivia. 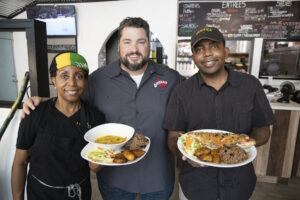 Vivia was completely confident that her food would find its niche in the middle of the Lone Star State because over the years of cooking she’s come to realize one thing when it comes to good eating. “The tongue does not discriminate. It loves what it loves. And it loves to experience new tastes and flavors,” she said. “And it has memory. For years, you’ll be like, man, I had that food at such and such. “Oh, yeah.” That was amazing. Yeah.” And it’ll get you to drive hundreds of miles across the state to try it again. Trust me, I know. 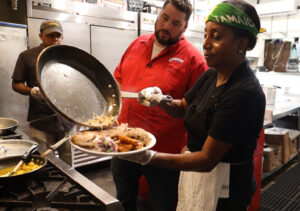 “In Waco we can stop and have chicken fried steak or something just regular Texas food. So this makes it really unique. It makes a really interesting trip out of it,” said diner Kyle McCain. 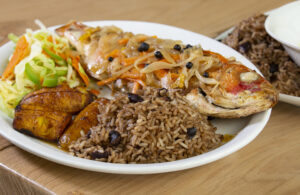 So what Jamaican dish will I be saying “yah man to,”?  We start with Curry shrimp. A simple mix of vegetable broth, salt and pepper, shrimp, curry, green onions, and garlic create the dish.

“We like to add a little bit of color,” said Vivia.  While shrimp simmer, Vivia gets a whole snapper cooked up.  A very simple dish consisting of allspice and onions but it has a kick that could flip a kilt thanks the Scotch bonnet, a pepper native to Jamaica that happens to be very close in heat to the habanero.

Vivia wouldn’t let us leave the kitchen without a little Jamaican jerk chicken, so we are now featuring three plates here on The Texas Bucket List. And we’ll start with the red snapper, a little light flavor.  The spice not overpowering, but boy, it does eventually kick in.

“I like spicy. And this was well within the range of really good spicy,” said Kyle.

“So it has a little heat, but not like so much that I need a whole gallon of milk,” said Paige.

As for the curry shrimp which is visually beautifully paired with orange carrots, green onions and the yellow curry.  The sweet shrimp and that spicy smoky curry just come together to make a unique taste. 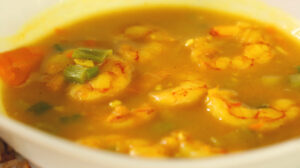 “Places have their different version of curry.  I think Indian curry is totally different than Thai curry and Jamaican curry is also its own thing. And I think it always tastes good with whatever it’s with,” said Paige.

The food makes you feel like you should be staring at some big green mountains and a beautiful ocean, with a pint of Irish stout, since it is so popular in Jamaica. Instead, we got the silos.

“It’s really, really rich. And I feel like it’s something different that I needed to try,” said Mendoza.

Finally, I got do dig into the jerk chicken which was tender, delicious, and carried out with class the Jamaican jerk flavor that you can’t find anywhere else.

“We’re doing jerk because that’s something… You get off the plane in Jamaica, that’s something that’s just known to Jamaicans,” said Vivia. “With all those 16, 17 ingredients, you still have to let it marinate so that it really gets into the meat.” 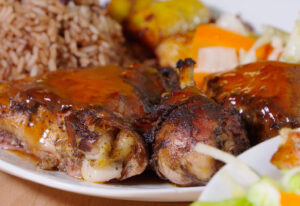 When it comes to the flavors of the Caribbean, Tru Jamaica in Waco is an excellent stop. So excellent, your Jamaican making me think it’s well worth a stop on the Texas Bucket List.

“Texas is a multicultural society at this point. People come in from all over. Baylor is here, that brings people in from all over the world. So it’s like try something different,” said Kyle.

“Texas is big with smaller heart. And you know what? We just want to bring a little piece of our heart to each Texan through our food,” said Vivia.