South Padre Island – South Padre is synonymous with sun and seafood.  So when you feel that warm breeze coming off the Gulf and get a hankering for huge portions of perfect seafood, Dirty Al’s will make you clean your plate. 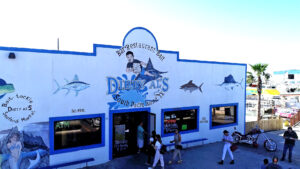 “It doesn’t compare to anywhere else. Anywhere else,” said customer Jose Aguilar. Neither does the owner, he’s one of a kind. Meet the man, the myth, the legend… Alfonso Salazar also known as Dirty Al.

How did the name Dirty come to you? “The right way or the wrong way? I’m not going to say it. I cannot say those things,” joked Al.

Al is known for a lot of things, one he always wears shorts.  The only time he didn’t, well, he heard about it. “Best part is the lady says, ‘This is the first time I see Al with pants on.’, You shouldn’t say that, girl,” Al said with big hearty laugh. 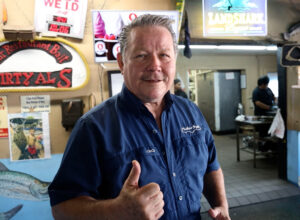 Al is in the business because of his three boys.  They’re the driving force behind his popular restaurant.

Growing up across the causeway in Port Isabel, Al grew up a fisherman and was even going out on his own at the tender age of 10.

“Whenever you’re a kid, you’ve got it made because you’ve got a job.  And then my dad says, ‘You want to go fishing? You want to have some money? Go shrimping.’ I said, ‘Okay. By myself?’” And my dad replied, “Yeah, you’re ready,”.

Eventually, Dirty Al bought an old bait shop and started selling tacos for one dollar.  That’s when his boys saw so much more potential and helped build a business known for fresh seafood.

“We’ve got the best eating shrimp. Tastes so good that people will come back,” said Dirty Al. All the shrimp is caught out in the Gulf.  “I’ve got friends of mine, they own about eight of them whole boats, big boats. By the time that they come in, the owner of the boat, he would call me, and they say, ‘Al, I’ve got a boat by tomorrow morning.’” explained Al. 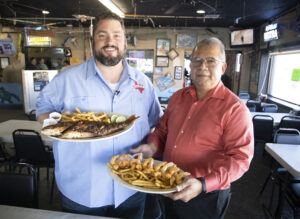 Joe Rivas, the director of operations at Dirty Al’s got tasked with taking us to the kitchen, because once again, Al doesn’t like to cook.  First, we had to stop by the display case to get our meal. Now we didn’t just reel in one dish, Joe put together three of them starting with fried shrimp of course. It included some of the biggest shrimp I’ve ever seen!

Then came the fresh gulf oysters. “You know what? Shucking oysters, it’s an art, because if you’re not careful, you’re going to slaughter the poor oyster,” explained Joe Rivas. The oysters get prepared Rockefeller style with bacon, spinach, Monterey cheese, and cheddar.

And finally, the fresh snapper.  It gets descaled and blackened with butter and spices. 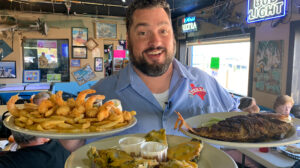 With a feast at Dirty Al’s. We’ve got the fried Gulf shrimp, the red snapper blackened to perfection, and some Oysters Rockefeller. The shrimp was a very sweet meat, not overly fried and delicious. If you want good, fresh shrimp, then you know exactly where to go. The delicious, blackened snapper, not an overbearing fish, just a good tasting fish.  And finally, it was time to rock the Rockefellers, a big old fat, juicy oyster. That gooey cheese mixing in with that oyster, and that spinach, and that bacon, and the onions is just good.  Teach a man to fish, feed him for a lifetime or come to Dirty Al’s and just have an incredible one meal.

“Well, I like that it’s fresh and it’s good. You know what you get every time,” said customer Esther Rubio.

Well, if you ever find yourself on South Padre, soaking up the South Texas sun, looking for some savory seafood, the fresh fish and fried shrimp at Dirty Al’s is well worth a stop on The Texas Bucket List!