Cleburne – The wild west was a lot different back in the 1800’s. The images we have of law enforcement prior to police cars can be somewhat preconceived. But if you head to the Chisholm Trail Museum in Cleburne, you can still get that western shootout show and get a look at what old school law enforcement was really like.

“This museum is dedicated to law enforcement. Originally, it was going to be about Texas Rangers. We were able to acquire a number of photographs that you see around the walls,” said David Murdoch. 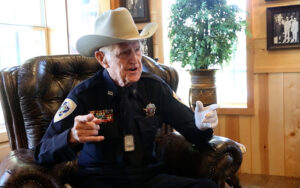 David Murdoch is the chairman of the museum and the Chaplin for the Johnson County Sheriff’s Office, he was excited to showcase a unique section of the museum that tells about the life of a unique Texas lawman, 98-year-old Deputy Bill Hardin.

Now Bill’s not on any most wanted top 10 list but he does take the case when it comes to another title. “I’m the oldest working police officer in the world. I’ve been a police officer longer than anybody in the world,” stated Deputy Bill Hardin. 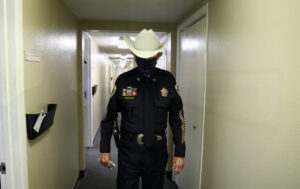 How long exactly? “I started February 1st, 1947. These stripes represent five years of peace. At 70 years worth of stripes, he’s got 74 years. And in June, we can add another stripe. So, he’ll have another five-year stripe,” explained David.

“Really been a pleasure, and I’ve enjoyed everything I’ve done with the exception of a time or two where things didn’t go just exactly right,” said Bill. 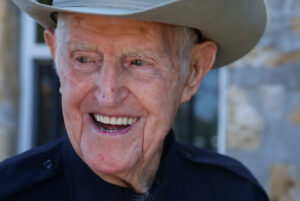 Born on March 1st, 1923, Bill joined the Fort Worth police department in the 40’s after spending his rookie years with Breckenridge PD and back then things were a lot different for those behind the badge.  Walking his beat was the norm and two-way radios were not a thing. “They had mailboxes on the posts, telephone posts, uptown. And you took the brass key, and when you opened the door and picked up the phone, the dispatcher answered you. You told him what you needed.  Usually, you had a drunk in one hand, and trying to hold him and talk to the dispatcher. That didn’t work out too well, but that’s the only communication they had,” explained Bill. Bill relieves his memories as a young policeman with vivid detail and crystal-clear clarity as if these events that happened a lifetime ago, took place just the other day. 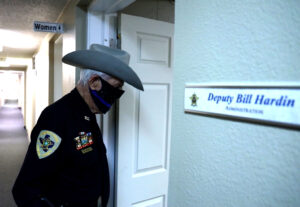 While his days of dropping the hammer or throwing a bad guy behind bars are behind him, he still gets to work on cases thanks to having a mind that’s like a different kind of steel trap.  “I’m a reserved investigator. My office is right across from the secretary and the sheriff’s right over there. He told somebody he put me up there so he can keep an eye on me,” joked Bill.

“Bill is such a … he’s such a young-minded person in an old man’s body,” said David. “He recalls all of the stories. He recalls his career. He’s a great asset to the county because when something comes up where they need the information back in the day, they don’t have to go look in the archives. They can just ask Bill, and he usually has names, and dates, and places. It is. It’s amazing. It’s truly amazing,” explained David.

Why is he still doing it?  “I love people,” stated Bill. “That’s really what makes you like police work … when you’re able to save a life or help somebody. In my time, I have helped a bunch,” said Bill. 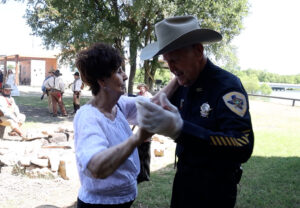 “I’ve had young people come to me. Like, the young girls that were into prostitution and doping. I’ve had those girls come in there … not one, but several, say, ‘Mr. Hardin? Do you remember me?” And I said, ‘No, I’m sorry. I don’t.’ And they tell me who they were. She said, ‘You helped me get off of drugs. I’m off of drugs and I’m married.’ Talk about making you feel good. It really makes you feel good,” expressed Bill.

Being able to hear Bill tells these stories of nearly a century of police work makes you realize the unreal things he has been a part of.  From busting up big drug rings, horrific cases of homicide, and even having to guard the grave of Lee Harvey Oswald.

“He’s a great representative for the law. He really is,” stated David.

What did Bill think about a museum for your service?  “Well, I’m humbled,” stated Bill. “It’s still the most rewarding job, and it’s the only job that I know of that you’re required to give your life to save somebody else. A fireman’s the same way. They have to do it. But everybody loves the firemen, but nobody likes the policeman because he gives you tickets,” joked Bill.