Angleton – No matter what corner of the Lone Star State you find yourself in, you’ll always be right around the corner from some incredible Texas history. Brazoria County is no exception. It was here that Cabeza de Vaca landed in 1528 and three hundred years later, Stephen F. Austin was establishing a colony in these parts. But to hear more of this amazing story, just look for the sizable statue of one of the heroes of Texas. 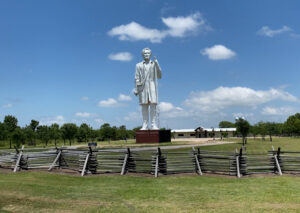 “I do have people that come down here from Nacogdoches and they’re amazed when they see the statute, and they pull over and they have to get a picture, and they always tell me, ‘We’re coming back with all of our school gear, so we can take a picture. We didn’t know that we had a statute too.’,” joked James Glover, the historic site manager at the Stephen F. Austin-Munson Historical County Park.

When I first meet James, I wondered if he was a time traveler from the past. “My boss tells me that I was dug up from an 1835-time capsule,” joked James. 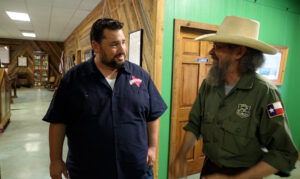 James is a walking encyclopedia of knowledge when it comes to the incredible history of Brazoria County and here it’s all about Austin and his colony. “Of course, we’ve got a giant statute of the Father of Texas out front, so we have to focus on him. I decided our focus on this site is pretty much what the original brainstormers for this site had thought of, was the era that influenced what Austin did here, and how far his influence actually carried,” explained James. 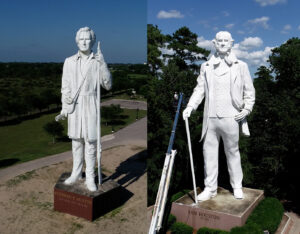 The statue of Stephen F. Austin was built by famous Texas artist David Adickes, who also constructed the massive Sam Houston statue you can find in Huntsville. But, how does he compare to the Sam Huston statue in Huntsville?  “According to the sculptor, four feet taller. I haven’t gone out and measured the two, but I’ll take Mr. Adickes’ word for it, since he built both of them,” stated James.

While his statue may be a bit bigger, in James’ eye’s, Stephen F. Austin had a much bigger role in making Texas what it is today. “I would say, although I am a bit biased, infinitely more important,” said James.

Austin was instrumental in settling Texas and that all started in 1821. “He came in, took an area that didn’t have anything, nothing here, and turned it into the most successful financial, as well as tranquil community, or area of Texas,” explained James. “All told, it is said that Austin settled about 6,000 individuals in Texas before he died,” stated James.

The history of Texas centers around Stephen F. Austin and Sam Houston, two men with massive statues that might have had a bit of a rift once Texas won its Independence. “Two guys who really were not fans of each other,” said James. 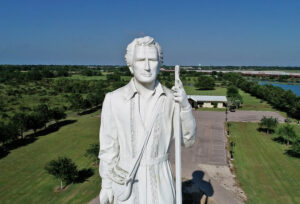 “That’s exaggerated,” said Texas historian and businessman J.P Bryan. Mr. Bryan is actually related to Stephen F. Austin and has an incredible collection of Austin’s paperwork to settle Texas at the Bryan Museum in Galveston.

“They were, for two men who were ambitious, and wanted to have as much control as possible, over events of the time, politically, they were certainly not enemies. They had periods of time where they were very compatible, shared sentiments about the same thing,” explained Bryan.

And that shared sentiment set the stage for the reason we call Stephen F. Austin the father of Texas. “Two days after Austin’s death, on the 27th of December, Sam Houston wrote a eulogy and had it published in a Telegraph and Texas Register at the town of Columbia, and in it he says, ‘The father of Texas has passed.’ That was the first time he was called, The Father of Texas,” explained James.

So head down to Brazoria County to see the Father of Texas overlooking the lands of the Lone Star State and toast to his Texas sized accomplishment of making Texas, well Texas. “It does represent the Father of Texas and the guy who set up the first successful, Anglo Colony in Mexican Texas at the time, and actually has some very important sites for what later became the Republic of Texas, and ultimately the State that we now enjoy, and they get to meet me,” expressed James.