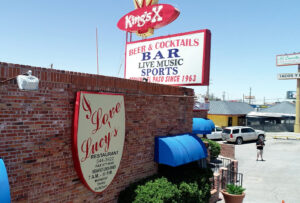 El Paso – When it comes to experiencing the culture and flavor of the west Texas town of El Paso, some say that Lucy’s should be first in your line. “That’s what El Paso’s all about. It’s a different blend of flavors and traditions,” said customer Hugo Arreolar.

Albert, his five siblings, and his son Josh, are in charge of keeping the family business afloat. You see, it was Albert’s mother Lucy who got this little business started in the 70’s. “She’s very well known here in El Paso. A lot of people know her. A lot of people love her. And, so it’s very enjoyable to follow what she started and keep her legacy,” said Albert.

That Lepe family legacy includes a few of the most famous dishes in the far west corner of our state. “We are the founders of Lucy’s famous Machaca and tacos Antonia.  I think it’s one of the best dishes El Paso has,” said Josh Lepe, Albert’s son. 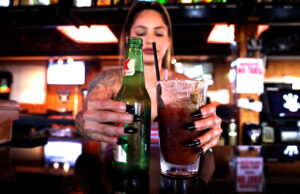 The Machacha and Tacos Antonia have been bringing in business like nobody’s business since 1978 and since 1981, Lucy’s has been in the same location next to one of the most divine dive bars in the Sun City, King’s X. “They’re iconic. King’s X it’s iconic. They’ve been here for over 60 years. And, so we’re glad that we’re right next to them,” stated Albert. “Back in my college days it was a good place to hang out. We’d come after the football games and stuff like that and it was always packed. We used to have live bands and stuff. It was just a fun place to be,” said customer Karen Mathis. 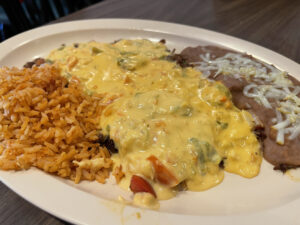 “It means so much to me. It’s everything about me. It’s my livelihood. It’s kept my family fed for all these years, generations. And, we’re just trying to keep that going,” expressed Josh. Albert’s son Josh got things started in the kitchen with their famosos fine offering. “Tacos Antonio and Machaca, bro,” stated Josh.

First up is breakfast, or lunch, or dinner just depending on when you want the world famous, traditionally first meal of the day. Josh starts us off with the machaca. Once this combination of pot roast brisket, eggs, onions, jalapenos and tomatoes is finished, it’s topped with tons of cheese. We’re not done yet because next up is the Tacos Antonia which starts with the same beef brisket and caramelized onions and the plate is a tortilla that gets hardened up. “Once it flips over, we’re just going to put the special seasoning on the taco shell,” said Josh. Throw on some sour cream, avocado, a citrusy cabbage salad and cilantro and we’re all set. 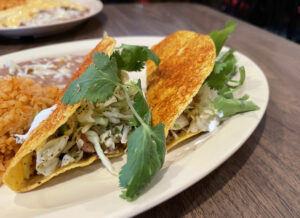 Once I got a bite of the Machacha, it was easy to see what everyone is so excited about in El Paso. The flavor is amazing. The queso with the beef and the tomatoes and the onions and the peppers make for such an amazing homemade flavor and a great breakfast in El Paso.

As for the Tacos Antonia, named after Aunt Toni, the tacos are an incredible mixture of beef, avocado, and that salad Antonia. Simply an amazing, light, crispy taco. The salad mixes so well with the beef and the avocado and then a little hint of the spice from that taco shell is amazing!

After finishing the tacos, I feel like Tacos Antonia might just be some of the best tacos in Texas. “It’s just stayed consistent. It’s the same, it’s comfort. It’s comfort food,” said Mary Mathis.

Well, this Lucy’s has no explaining to do. For an iconic taste of El Paso and a flavor you’re sure to love, come into Lucy’s to get the tacos Antonio and the Machaca. “We’re going to make you happy,” stated Albert.