The Texas Bucket List – The Burnt Bean Co. in Seguin

Seguin – When it comes to getting a bite at the Burnt Bean in Seguin you better jump to it because this place is popular during the four days a week it’s open. “I always say lines, don’t lie. If there’s a line, there’s a reason it’s good barbecue,” said owner Ernest Servantes. 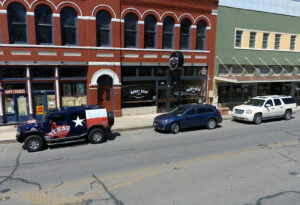 Ernest is the pitmaster that turned the pot on high to create the Burnt Bean Company, a BBQ joint that sometimes gets misidentified. “So what kind of coffee are you going to be selling? That’s such a great coffee name. Are you going to be like a Starbucks,” joked Ernest who is originally from Uvalde.

Ernest opened the Burnt Bean Company in January of 2021 and it didn’t take long for the restaurant to get a really good reputation but that might be because Ernest already earned his. “My claim to fame is Competition Barbecue.  I’ve won 45 to 50 grand champions, 18 times state champion, I won everything you can win in Texas and then went all the way all over the country to prove that Texas has the best barbecue,” said Ernest. Ernest’s accolades don’t stop there, he’s been on shows much fancier than The Texas Bucket List. “I’ve been on about eight shows like Chop Grillmaster Champion, Tournament of Champion, Barbecue Pit Masters, Barbecue Pit Masters: All-Stars, Barbecue Crawl, barbecue… Oh, so many barbecue shows,” said Ernest. 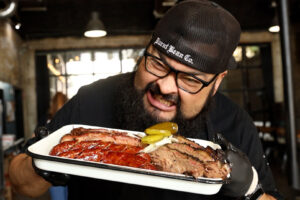 Back in his competition days, Earnest had one competitor that always gave him a run for his money.  A competitor, he trained himself in the ways of the BBQ master, David Kirkland. “He used to get mad at me because he would show me the process and then I would use it and beat him and then he was like he didn’t want to show me anymore. He’s like, ‘All right. All right. All right. That’s enough of that.’,” explained Ernest. Now they’re partners and co-owners of the Burnt Bean. “I taught him everything I know and so everything that’s put out, if I’m not in the pit he’s on the pit. He’s the only two guys that run those pits,” stated Ernest. 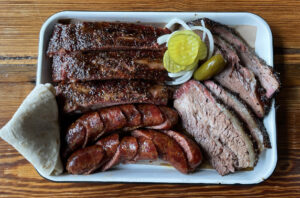 Now enough talking about it, I wanted to try one of these infamous plates! Earnest got things started on his Texas Trinity plate. First up is brisket, which I got to sample during the preparation of the plate and it is amazing.  Smoky, peppery, and perfect. Then came the ribs and sausage. “Our sausage is a three-day process and all we honestly use and I’m proud to say it is, we use our own brisket trimming. So we’re using prime beef instead of scrap meat or anywhere else that a lot of places do,” explained Ernest.

Then came the sides and I had no idea how big a thing these are at the Burnt Bean. I got a taste of the Brisket Cowboy beans, Mississippi Style Green Beans, Jalapeno Street Corn Pudding, Bacon Ranch Potatoes, and Hot Cheeto Mac and Cheese. 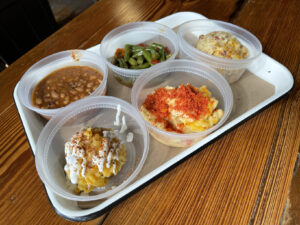 After sampling the smoked meats and all the sides, it’s safe to say this is one my favorite BBQ joints in the whole state.  Truly magnificent flavor no matter what you order.

“He can turn anything into something good to eat,” stated customer Tom Dodgen.

“We want Seguin to be proud of us,” stated Ernest.

“This will be a destination spot much like some of the other well-known established barbecue places around the state,” said customer Tom Dodgen.

Well, if barbecue is your thing, then I’ve got a place for you in Seguin, it’s called the Burnt Bean and it is well worth a stop on The Texas Bucket List.

“The Burnt Bean Company is a dream that I never thought would ever happen. And it’s like, “Now I don’t want to go to sleep because the reality is better than my dreams and I’m in a good place,” said Ernest.