San Angelo – On the banks of the Concho River, you’ll find this nearly 100-year-old firehouse taking tons of calls. But those cries aren’t for help with fires but rather help with hunger.

Michele Babish and her helicopter pilot husband Jodi purchased the Old Central Firehouse back in 2017. Together they converted the old Trost building into one of the hottest hot spots in San Angelo, the Old Central Firehouse Pizzeria and Taproom. “When we saw it, it was a little bit neglected. It didn’t really look like a firehouse but we had seen some old pictures and just saw a vision,” said Michele Babish, the owner. “So cool that they preserved the history yet they made it into a really hip place,” said customer Jaymie Williams . 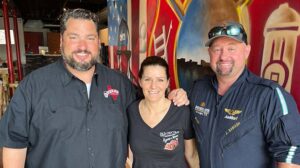 Known for their pizza pies and cold beer, the Old Central Firehouse is also known as a place to rest your head, because they have rooms you can stay in right above the restaurant. “It is a lot under one roof, but it works so great, it really does. It works very well,” stated Michele.

While you can live out your childhood fantasy of being a firefighter or Ghostbuster, you can pour your own pint on their unique self-serve suds wall. It’s never been easier to cool off your thirst for a tasty Texas beer but could their pizza keep up with the heat. We headed to the kitchen to showcase three unique pizza pies. “Today we’re going to do the Brisket Pizza. And we’ve got a Spicy Pickle pizza that we’re going to do and the Street Taco pizza,” said Andrew Owen as he brought us back into the kitchen. 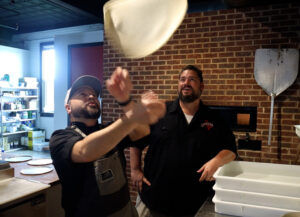 Andrew Owen is the General Manager and did he say pickle pizza? I might have just gotten myself in a pickle. First off the Brisket Pizza.  Andrew prepares the dough that’s made in house. Sliced mozzarella, a parmesan, basil, parsley mix, and marinara starts things off. Fresh jalapenos and red onions complete a fine ensemble before it hits the fancy fire. A 720-degree oven with a spinning stone that cooks pizza in 90 seconds. Cilantro and a BBQ sauce drizzle complete our first pizza.

On to pizza number two, the street taco pizza has no sauce and is topped with sliced mozzarella, the mix, and marinated skirt steak.  Once baked it’s topped with minced red onion, chopped cabbage, cilantro, queso fresco, guacamole drizzle and limes. 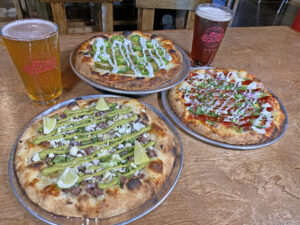 There is so much Texas flair in the brisket pizza. It just makes you want to lasso the west Texas wind. “I’ve had all of the pizzas here. I love the meat on it. It’s cool because a lot of people don’t put barbecue brisket on pizza, but this is Texas, so why not? Right,” said Jaymie.

From there we’re going to go south of the border to the street taco pizza. It literally smells like a taco. Once I take a bite, it does not feel like you’re eating a pizza at all. It has such a unique flavor. Almost like eating a taco with a really soft, warm shell.

Finally, the one you’ve all been waiting for the Spicy Pickle pizza. We’ll try to find one that has an equal ratio of pickles to jalapenos. This is pretty darn unique. San Angelo you have surprised me! This Spicy Pickle Pizza is sensational! “Pickles on pizza, two favorite things, got to get it,” said customer Heather Burelson.“We thought we’ll put it on and kind of see… Sounds weird. But then we tasted it and it’s amazing. And our regular customers… I mean, we sell it all the time, so we’ve kept it on and we’ve never taken it off the menu,” explained Michele. 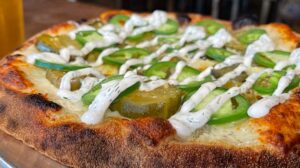 Well, if you’re into pickles, this will tickle your pickle. “I love pickles. I think you have to love pickles to like the pizza. If you don’t like pickles, I wouldn’t get it, but I love it. It’s good. And with the dill sauce, and the pickles, and the cheese, it’s perfect,” explained Jaymie.

Well, Peter Piper may have picked a peck of pickled peppers, but if he came to St. Angelo, Peter Piper would pick a Spicy Pickle Pizza. “It’s really good. Throw a little bit of ranch on it and tear it up,” said Sean.

If you’re looking for a pizza place with some incredible Texas flavors and things you wouldn’t expect to find, or just looking for a Lone Star State beer, or even just a place to rest your head, come into the Old Central Firehouse in San Angelo Texas. It’s well worth a stop on The Texas Bucket List! “I’m a big pizza fan. I don’t think there’s a better pizza place here in San Angelo,” stated Heather.