The Texas Bucket List – The Happy Toy Maker in Happy 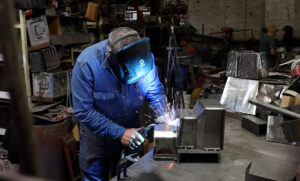 Happy – Over in Happy, Texas there really isn’t a whole lot going on but just north of town, you’ll find Jerry Sim’s homestead and here there’s always something happening. “Happy’s known for the town without a frown,” stated Jerry in his low and harmonic voice.

Jerry may sound as cool as Conway but he’s not much of a singer.  “They pay me to keep my mouth shut in church,” joked Jerry. Instead, he farms and ranches but lately he’s been busy building things that have been all the rage around the country. “Feedlots, rodeo arenas, semi-trucks, pickups, gooseneck trailers, hay trailers,” listed Jerry. But these aren’t your full-sized farm equipment, Jerry builds toys that are smaller replicas of the equipment. “I try to make everything as real as possible,” stated Jerry. 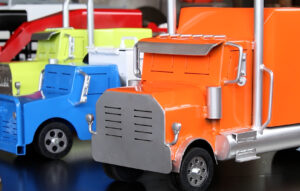 Known as the Happy Toy Maker. “It’s a good thing we weren’t from Sad, Texas,” joked Jerry. Jerry and his crew of 10 crank out toys that aren’t typical. “It’s a durable, very durable toy. And if you did bend something or break it, you could just weld it back together and go again,” explained Jerry.

This all started in 2006 when Jerry’s son’s wanted dear old dad so Dad did what any father would do and found a way to make their dreams come true by building it himself. “My boys, they were little and they wanted a doctoring chute, a blue doctoring chute. It took me six months to do it and the tub and the snake, but I gave it to them for Christmas that year and it was a big hit. So every year they wanted something else. They wanted everything in the house that I had outside,” said Jerry. 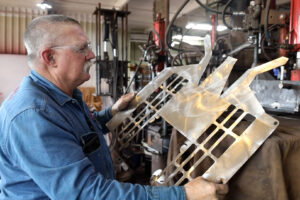 Today over 6,000 toys are turned out of here, and he showed us just how he does it. “Yeah. There’s three different sizes. 16, 24s, and 32s. And they are heavy. When that trailer’s got tires on it and paint, it’ll be 44 pounds in a box.,” said Jerry. These cattle trailers look so sturdy. It looks like you could literally hook it up to a truck and drive down the road.

These toys just don’t bring joy during the Christmas season, they also help train the next generation in the sought-after skills of welding and craftsmanship. “We’ll teach them how to TIG weld and MIG weld and run the plasma torches and get them working on some small projects. I love teaching these kids how to work and what life’s actually going to be when they get out of high school and give them a trade. Not only making little kids happy, you’re also job training for the future,” expressed Jerry. 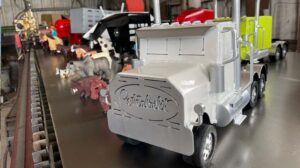 Jerry loves building toys so much that he hardly takes a day off, usually working 7 days a week at all hours of the day, including Christmas. That’s because every Christmas, Jerry gives back by delivering toys to kids who really need a Christmas miracle. “Usually Christmas Night, we go around in different towns and put some toys out on some doorsteps and things. And it’s usually three or four in the morning before we ever get done,” said Jerry. 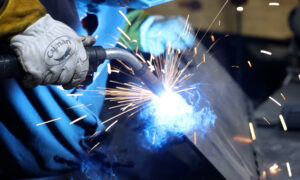 In Paul Harvey’s famous speech, “So God Made Farmer”, it talks all about the incredible contributions made by people in agriculture. Well in Jerry, God made a farmer but threw in a twist and also made him a toy maker. “I think it’s just a talent that God gave me and I just want to give and have things that last,” expressed Jerry. “I just really hope that the little kids that are playing with these things stay interested in agriculture because there’s very few that want to work as hard as agriculture takes to make a living but it’s going to take some of these little kids taking over these farms and ranches to be able to feed everybody. So that’s what I’m hoping that it helps,” explained Jerry.

So Jerry and his crew continue their work, spreading joy and a bit of knowledge all while making memories that will last a lifetime. “It’s just been a major blessing to be able to do this and I don’t know what I would be doing if I wasn’t doing it. Probably farming somewhere,” said Jerry.