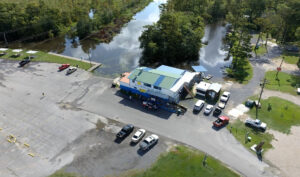 Orange – Southeast Texas is always one of my favorite food destinations in the Lone Star State. You can find such an incredible flavor thanks to our friends from across the Sabine adding a little flair to the food.

That’s exactly the case right on the water’s edge in Orange where the Bluebird Fish Camp has been banging out beyond amazing grub since 2014. “The people make you feel so welcome, they let you know you’re loved. They help you in any way they can,” said customer Sallie Haynes. “Everybody we meet, they turn into family. You just can’t help it,” said Ashley Steiner.

Steiner’s family runs this business by the water and relatives are reliably always hanging around the Bluebird and there is a lot of chirping going on around here. “It is literally like growing up at your grandma’s house and having all your cousins and everybody come. The door never stops swinging, that’s how we grew up. And it’s just like that here, the door never stops swinging,” said Ashley. 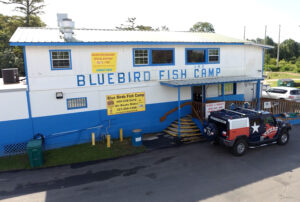 You’ve got Grandpa Lem, who’s 96. “He’s still driving on the tractor, cutting yards and pastures, and helping his friends work on cars,” stated Ashley. You’ve got Floyd, who’s a local that might as well be an adopted part of the family. “If they don’t see me one day, they say, ‘What happened to him? He ain’t kicked the bucket, huh?’,” joked Floyd. Rodney Harris the cook is one of the friendly folks we’ve ever met. “You’ve got to make them feel like hospitality around here, and I love it,” said Rodney. “Rodney is definitely a character, but he’s a great character to have around here. He keeps the place lively,” said Sallie.

Then you got all sorts of aunts and uncles. “Our family is so big it’s probably, I think, close to 150 of us,” stated Ashley. That just scratches the surface of the Bluebird. “For this joint, let me tell you, we got all kinds, all kinds of crazy,” joked Ashley. 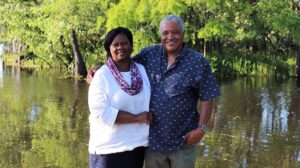 The food is also crazy. Crazy good. “Every food you can imagine is incredible, from their fried pork chops to their fried crabs,” said Sallie. “A good fry, seasoning’s good, and it’s good, and that’s real,” stated Floyd.

Rodney has no problem having to come out of his shell while preparing their famous fried crab. “They’re amazing. I could eat my weight in them,” joked Ashley. This unique hangout the shores of the Sabine would be here if it wasn’t for a vision Ashley’s father, Oscar LaBlanc had about this place.

This building was originally built in 1925 and has stood strong ever since.  “I would not have even thought for a second, I didn’t dream that this place would look like what it looks like now,” expressed Ashley. Oscar brought the Bluebird back to life. “From the day I came here, I have watched Oscar build this place up from squalor to an incredible little home run, family-oriented facility,” said Sallie. “That’s one of those things that daddy does, is he works with his hands and he can fix any and everything. I don’t think there’s one thing that that man can’t fix,” said Ashley. 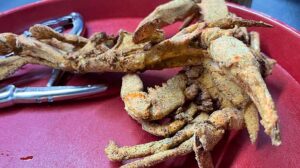 Over the years, the Bluebird has weathered massive hurricanes and Oscar has always been there for his community. “Daddy opened up the doors and fed all of the crews that were working, the electrical crews. And they ended up staying here and daddy just fed them for three months. And those people are pretty much… they still call mom and daddy and check on them,” explained Ashley. “He’s good to everybody, been good to me, and this is what we’re at,” expressed Rodney. “He draws in the community. He is great to the community. He gives back, he helps a lot of people that are struggling to get back on their feet, give them a job, put them to work, feed them, whatever it takes,” explained Sallie.

“We don’t really know what else to do, just love on people and just be what God called us to be, is a light in the darkness and mostly loving our neighbors. That’s what we’re supposed to be doing,” expressed Ashley.

Despite overcoming severe storms, freezes, and even a fire, there was one night everything changed. In May of 2021, Oscar was shot 6 times by an unknown gunman in his backyard. “I could hear the doctors telling me that, ‘I don’t think the guy’s going to make it.’ But the only thing I had to do was put my trust in good Lord God,” explained Oscar. 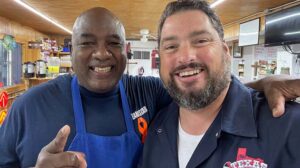 Oscar miraculously survived. “It’s pretty hard to see your daddy lying in bed, literally on the edges of death,” expressed Ashley. “It was absolutely shocking. He’s such a great person, so for somebody to have hurt him, it’s detrimental to this business, it’s detrimental to our community,” said Sallie.

“All I could do is pray and ask God to keep me, to help me through, He brought me through. A lot of days I thought about giving it up, but I said I can’t do it because the oil people, the church people, they believe in me and I don’t want to let them down. I want to be there for them,” said Oscar.

Those prayers worked. After 18 hours of surgery, Doctors didn’t think Oscar would walk, talk, or even be able to eat on his own again but so far he’s flying high over those expectations. “I’ve got to thank God for it because if it wouldn’t be for God, I wouldn’t be here and that’s the truth,” Oscar expressed.

“So many people say, “Oh, God works miracles.” And you see it from a distance, you don’t get to see it up close in person. But we are… it’s like watching TV, it’s right in our face with him,” explained Ashley.

Oscar’s final thought during our interview is the one I’ll remember the most. You see, the reason why I started The Texas Bucket List wasn’t to travel the state and have fun, it was to tell tales of Texas and be divinely pointed in the direction of stories that needed to be told.   “I always had a dream to see you come down here, and here he is. God made a way that you came this way, and I’m happy to see you, I really am. Oh, yeah,” said Oscar.

Don’t take my word for it but if you happen to be in Orange, Texas stop by the Blue Bird Fish Camp to meet the LeBlanc family and before you know it, you’ll feel like a part of the story. “Through the bad situation that happened with daddy, it opened my eyes up about not taking family for granted, and life changes in an instant,” said Ashley. “People really love me over here. They mean a lot, sir, they mean lots, they really do,” stated Oscar.