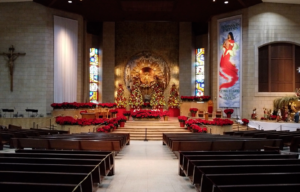 San Juan – The Rio Grande Valley is a massive mix of two cultures but one of the many things that brings them together is faith. That’s why the Basilica of Our Lady of San Juan del Valle is such a hot spot on the border. “We are proud that we have it in Texas,” stated Father Jorge Gomez.

Father Gomez knows this church well, but he also knows what we usually come down to the Valley for. “People in the valley are friendly, no, and our food is the best in Texas,” joked Father Jorge about know what we like on The Texas Bucket List.

Jorge was ordained here in 2004. “When I was 14, I wanted to get married and have a bunch of kids. And then I went to the seminary at 16. I went to high school seminary. And my dad said, ‘Go, and you’ll be back in a month.’ It’s going to be almost 30 years and I’m still here,” explained Father Gomez. 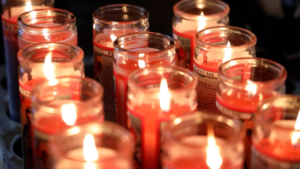 This shrine got its start in 1920 as a small wooden chapel but today Our Lady of San Juan del Valle is the second most visited shrine in the United States only behind the National Shrine in Washington DC.  Each gets over one million visitors a year and considering the population of the Valley is 1.3 million, that’s pretty impressive. “The Basilica is geographically centered, is the center of the diocese. So people come from all over the diocese here to pray, to light a candle. Whenever they’re going to go into surgery, people come and pray to Our Lady of San Juan. They bring a candle. You can see people walking on their knees from the entrance all the way to the altar through the back to the altar of the candles. It is just amazing,” explained Father Jorge.

The reason this shrine is so sought after is part of this miraculous story. “I think the popularity of it grew with the plane crashing on the old shrine,” stated Father Jorge. On October 23, 1970 during a special mass with 50 priests, 50 parishioners and 100 school children  in an adjacent cafeteria, a plane crashed into the shrine and it exploded in flames.   While the church was destroyed, the only fatality that day was the pilot. “Whenever they want to destroy the faith, they do something and then the faith grows stronger. That guy wanted to destroy the church and probably killed the priest inside and the people who were celebrating the mass, and it just happened that it made it into the New York Times and people found out and people started coming more and more, and they saw what they call the miracle. You know, that the statue of Our Lady of San Juan was salvaged from the fire and the blessed sacrament, and that made the devotion grow in the Valley,” explained Father Jorge. 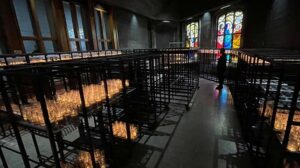 The new Shrine opened in 1980 and while it’s beautiful year-round, Christmas truly brings the holiday season to life.  And yes, this church is a gift shop if you need something for that special someone. The biggest seller here is candles because here lighting a candle is a prayer and to  pray is what people come here for. “We usually get 10,000 candles a week,” stated Father Jorge. “The faith of the people evangelizes me. I’m here as a priest, no? I’m supposed to be the one evangelizing the people, but no, when I see the devotion and the fate of the people, their fate evangelizes me. And when I see them praying on their knees with a candle on their hand, I always say that candle has something special. You know, because it is a prayer, it is a Thanksgiving, it is a petition, it is a family praying there. It’s a lot of meaning,” said Father Jorge.

“We have candles to St. Jude, Our lady Guadalupe, Our Lady of San Juan, St. Joseph is very popular. People go and buy the candles with the saying they want and then they bring them here. Holy week or Christmas, we get more candles than the one we can put in the candle room,” stated Father Jorge.

The gentle flicker of each flame is a radiant reminder of why religion brings us together.  In the end, we all want the same, for friends and loved ones to live healthy happy lives, to end suffering and sadness, for goodness to triumph over evil and for the light from above to shine down on this Earth. “I think that’s the beauty of this place. People leave and they go back home different than the way they came, because there is hope. And our hope is not in ourselves, not in human knowledge or human science. It’s too little. Our hope is in Christ and in the resurrection of Christ. Every Catholic or non-Catholic should come to the Basilica to experience God’s love and mercy. It’s not the only place they can experience it, but it is a special place,” expressed Father Gomez.