Crawford – Massive Christmas light displays have become a big business during the holiday season in the Lone Star State. People waiting for hours to see holiday theme parks is becoming the norm but there’s still a few brave souls who prefer to put on the show themselves. Kevin Heatherington of Crawford is one of those people. “Sometimes I think, ‘It’s just Christmas lights.’ But then when you see the reaction, it’s all worth it,” said Kevin.

Kevin owns a landscaping company but when he gets to his home in a country cul-de-sac in Crawford, he keeps working on the yard, his yard. Usually around August, Kevin starts uncoiling miles and miles of cable every evening to create a large light display his wife likes to call, the best little light show in Texas. “We honestly quit counting after about five million. I mean, you just get confused and you feel like, ‘All right, let’s start over.’ And I just said the heck with it, we’ve got five million lights. That’s where I keep it,” joked Kevin. Kevin’s wife, Michelle, had no idea what her husband’s Christmas display would turn into. “I didn’t think it would take up this much space,” stated Michelle. 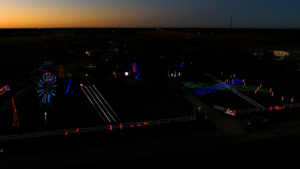 Being at the end of a cul-de-sac has made things even more interesting. “The neighbors are going to kill us,” joked Michelle. “The closer you get to Christmas, the busier it gets. We just ask everybody to respect our neighbors. Come through, take a look at the lights, try not to block any of the driveways. I mean, if it wasn’t for my neighbors allowing me to do this, I wouldn’t be able to do it,” explained Kevin.

This halo of light around Kevin’s house has been a tradition since 2010 and the reason he wanted to do this is the same reason many of us are so particular about personal Christmas traditions, we’re all trying to hold on to those magical memories we had in our youth. “When I was younger, my mother used to take us around to see Christmas lights all the time and that’s just a really big memory of mine. You don’t see many people doing Christmas lights now. I mean, you see people drive up and they’re in a line and they get to see the lights, just seeing the look on their face is really, really exciting,” said Kevin. “It’s just amazing. The lights and the music. It’s fast and it’s exciting. Everybody’s just oohing and ahhing,” stated Michelle. 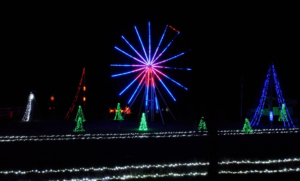 Now this display isn’t as easy as grabbing an extension cord and plugging in a few strands of lights. This takes programming and tons of equipment. “It takes about 400 hours to program something of this caliber. There’s a control box. Each box has anywhere from 16 to 36 channels in it and every one of those little control boxes will control one line of lights out here, or one tree, or one ball. I mean, you have 36 of those boxes throughout this property. There’s close to six miles of extension cords out here and I mean it takes a while to get all this laid out and get everything going to the right channel,” explained Kevin.

While his electricity bill only goes up about $40 bucks, it’s the cost of the lights that might spark a white lie or two. “The worst time is after Christmas when all the lights go on sale.That’s when he really does some damage,” said Michelle. “I have my own little secret credit card that I try not to let my wife see,” joked Kevin. “Yeah, I knew about the secret credit card. I know everything,” said Michelle. Michelle must know Santa.

The true Christmas miracle is these lights don’t just brighten hearts over the holidays, they also have turned into charity that Kevin never saw coming. “People started giving us donations and we were like, ‘Uh, what do we do with this?’ And I think the first year they gave us $2,000 or $3,000 and I asked my wife, I said, ‘We never started doing this for money.’ So we just started donating it. So now we actually have it set up to where every donation, they all go to St. Jude. And you start getting $10,000, $15,000 worth of donations every year, so that’s always in the back of your head. You’re thinking, ‘No, I’m doing this for a good cause.’ So it works out,” explained Kevin. 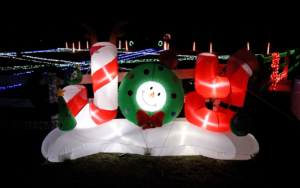 And the main reason, all of this started? “Someone asked me one time, ‘Why is it so big?’  And I said, ‘Well, if you’re going to give a party for Jesus, I don’t think you can make it big enough.’,” joked Kevin.

So if you ever find yourself in Kevin’s corner of Crawford, just look for the lights illuminating the night sky and you’ll find the best little light show in Texas. “He’s going to be doing something, so he might as well be doing something that brings everyone joy,” said Michelle. “Brings a little bit of Christmas spirit,” stated Kevin.