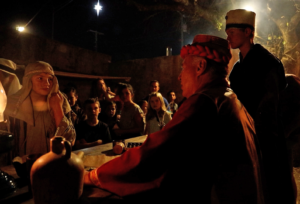 Burnet – On the first two weekends of December, the town of Burnet brings in a bunch of people. Lined up along the city streets, they wait to walk through the gates of a unique holiday tradition called Main Street Bethlehem. “I mean, you’re transported back 2000 years when you come through that gate. It’s just amazing,” said Doug Lindley, the senior pastor of the First Baptist Church of Burnet, the folks that have been bringing Bethlehem back to life since 1993.

While you won’t hear Aramaic while walking through the city streets, you’ll hear the story of one fateful night that changed the world forever. “You have not heard the news.” No. “My brothers and I, we were tending our sheep in the hills on the road to Joppa, when an angel of the Lord appeared to us and the Glory of the Lord shone all around us. There was light everywhere. We were terrified but the angel told us to be not afraid, that he had good news, tidings of great joy for all mankind. That here tonight in the City of David, the Messiah has been born,” proclaimed a cast member in character. “The cast is unbelievable. They don’t leave. They don’t get out of character. Most of the time they’re interacting with one another. They interact with guests that come in, but they interact in their character,” said Doug.

Roman soldiers, busy taking the census, are constantly distracted by locals talking about the Messiah. “The shepherds in the field are saying that there’s a Messiah being born tonight,” stated an in-character Roman soldier.

Every building has someone unique, telling their particular perspective on what happened when Christ was born.“Oh, we didn’t have any idea whatsoever that it could have developed like this. It was something to keep us busy for a while,” explained Norman Leftwich, the man behind the idea of Main Street Bethlehem. 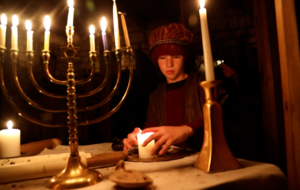 Norman Leftwich and his wife Frankie were the driving force behind this idea that started with wood framed walls with sheets painted to look like rock walls to what it is today.  A full immersive land with camels, cows, and a crazy amount of detail.“That’s the blessing that we receive is seeing the faces of people who did find that it is unique and apparently there aren’t very many displays like we have here that you can find, done in the way that we do it. We praise the Lord for that and he’s responded,” expressed Norman.

Well into his 90’s, Norman has seen Main Street Bethlehem grow beyond his wildest dreams and before the night gets kicked off, he leads a prayer that is closed out appropriately enough, with the singing of Little Town of Bethlehem. “He’s the hardest worker out here. He’s out here maintaining the facility year-round and doing things year-round, involved in cast recruitment, cast training and very humble about it. But the fact that the Lord used them to do this and that he let him stay long enough to see what it’s become,” explained Doug.

This peaceful Christmas Carol helps bring home the final destination of Main Street Bethlehem.  The stable depicts the birth of Christ. “We consistently as a congregation pray on site at the manger and there’s something about … I just get emotional when I think about it. When you walk through that gate and see that cave and know he really did this. It’s not just a nice story. He really did this. God became human and he didn’t come as a king or a prince. He came as a baby and he wasn’t born in a palace. He was born in a barn, in a stable and laid in a manger. He did that because he loves me,” explained Doug.

“I think it’s just a good grounding moment for Christmas. It just really reminds you of where it all came from,” said visitor Deborah Figueroa. 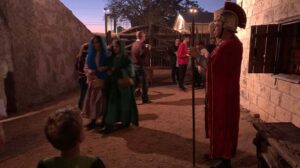 While this display is only a recreation, it truly tugs at the hearts and emotions of the faithful.  Whether it’s joy for the season, the excitement of what this moment has meant in history, or the simple flourish of faith that fills you for some reason everyone seems to get something out of this. “I mean the Spirit of Lord came over me and it was just amazing. I just started crying and I went out the gate and I couldn’t even talk to anybody. And I’m just trying to get away because I’m just overcome by the power of the Holy Spirit,” expressed Doug.

But it’s not just the spirit of Christmas that comes over people. For Ana Crowell, it’s a chance to close out the year remembering someone she wishes could have taken this journey with her. “My mother passed away and she has always wanted to come here so today I just fulfilled her… yeah. Yeah, it’s good to be here,” expressed Ana.

“You know, I was pretty surprised. It takes you back in time and it’s awesome. We got to see baby Jesus, that’s the best part of it all,” said Ana.

“If you love Christmas? If you love history, this is definitely the place to come,” stated Deborah.