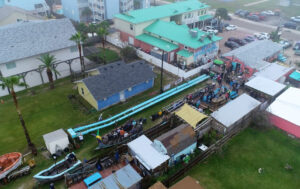 Port Aransas – Traveling to Port A is the perfect stop on The Texas Bucket List. You’ve got sun, beautiful beaches, great food, fine folks, and furry friends. But if your competitive juices start to flow and you’re looking for a great showdown between competitors, just head to The Gaff. There you’ll find a unique tournament of champions, the Belt Sander Races.

“This is the greatest thing in the world,” said patron Terry Gillespie. “Where else have you ever seen belt sander races,” asked patron Joe Jensen. “We are the birthplace of Texas Belt Sander Racing,” said owner Kip Shannon. Kip started this backyard competition that takes place on a really long board back in 2005. “It’s a little competition, it’s a little bit fun and everybody gets together, it’s a community thing,” said Kip.

Popular with winter Texans but busy throughout the year, the semi-monthly matchup brings in the best belt sanders from across the country.  But racing isn’t the only thing going on here. “It’s a get together, we have a party,” stated Kip. “I saw crusty old men turn into 10-year-old kids at the drop of a hat and I’m like, ‘I’m onto something.’,” explained Kip. 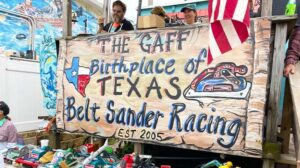 Now I would say that usually drinking and power tools are a bad idea. “It is when you’re racing. We try to keep everything down to a low roar. Sometimes it will mess up and you’re out because of your drinking,” said Kip.

Donna Orozco is one of the many competitors that gets a grip and lets it rip. “When we first heard about this, we came down here and we’re like, ‘What the heck?’ And we’re like, ‘Oh my God, we got to do this.’,” said competitor Donna Orozco. “I tell people like, ‘We race belt sanders.’ And they’re like, ‘You do what?’,” joked Donna. Her Lady Liberty is a true testament to the American spirit, and sure makes Donna proud when racing down the track! 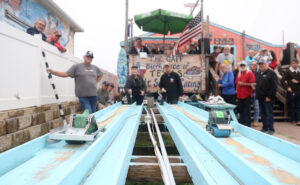 All these power tools have a personality all to their own.  From Ol’ Blue, the Cheesehead, to the Money Pit, you never know what you’ll find riding or potentially dying. “The decor on them is pretty interesting,” said spectator Haley Jamison. And it’s not just what’s on the outside that counts. These folks get serious when it comes to sanders. The winner of 2010 Las Vegas hit this track, he’s got the record at 2.5 seconds. And he’s an electrical engineer and he has a little something in there that no one knows what it is but whatever it is, it makes him a fast sander,” said Kip.

Some of the entrants are so fast that standing close to the track can be a bit precarious. “We have tested to see if it does jump the track how far it goes and this usually is a pretty good buffer zone for safety wise. And then it did go to the neighbor’s yard one time but that was rare,” said Kip. 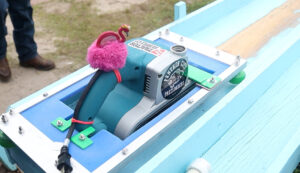 With dozens on hand, cheering on their favorite challenger, the tension is palpable. “I always do like a little bit of deep breathing before I get up there to settle my heart rate down and just focus on that light,” explained Donna. Because this is a race of inches. “It’s the luck of the draw. You don’t know which lane you’re going to get, one lane’s kind of faster than the other so it’s a lucky thing,” explained Kip. “We’re all really good friends that we all cheer each other on. And it was amazing. It’s good to be here with all your friends, for sure,” expressed Donna.

In the end, Donna pushed it to the limit and took the title of champion on this day of the belt sander races. “This is our fifth season we’ve been racing and this is my first time to ever get number one,” stated Donna. “I make a lot of people happy on these certain little days, twice a month. It takes a lot of energy out of you but it’s impressive to see how much fun and joy these guys kind of… I bring purpose to people’s lives, I like it. I really like it,” expressed Kip. 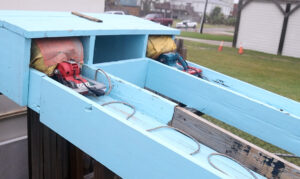 “It’s one of those kooky little things that you’ve just got to see,” said Kip.

“Oh man, this is a genuine Texas experience, and where else can you go to a pirate bar? This is like the best place in the world to me. I love The Gaff. I do,” said Donna.