Marathon – Brewster County is the biggest county in our state, covering over 6,000 square miles! It’s home to Big Bend, Terlingua, Alpine and Marathon. The whole county has three BBQ joints and the Brick Vault is one of them.

“There wasn’t much. I don’t really know of any other place other than us. There’s a good spot there in Marfa, Convenience West is good, but other than that, there wasn’t any barbecue out here,” said owner Phillip Moellering. 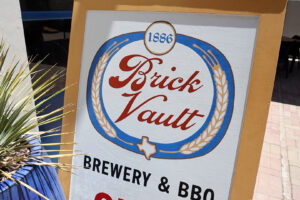 Moellering didn’t mull over the idea of opening a BBQ joint in this desolate destination because it seemed like the perfect fit in the eclectic destination that is Marathon. “Yeah, it sounds crazy. It’s not like the hill country where you can get the barbecue in every town.  It’s so quiet. The mountains, it slows down out here. I mean, there’s not much traffic, it’s peaceful and it’s a place where you can just lose yourself and get away,” expressed Phillip.

Just steps from the Gage Hotel and the White Buffalo Bar, some of my favorite stops in the whole state, the Brick Vault gets its name from a brick vault in the back that was part of the original building built in 1886. In 1927 the building burnt down but the brick vault survived and it’s still smoking today. ‘It is a smoker. It’s a cold smoke, it doesn’t put off a whole lot of heat, which we don’t want. We’re just trying to get the smoke on there for the bacon,” said Phillip. 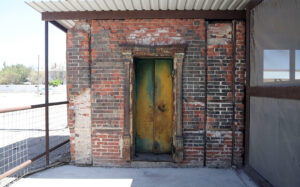 The rest of the BBQ is cooked in an offset 1000-gallon smoker and that includes the inhouse made sausage. “We try to do a different sausage every week. We try to do our play on a Queso Flameado, which is Asadero cheese, and we, kind of like a chorizo, and we just stuff it all in there,” explained Phillip.

Souped-up sausage isn’t the craft offering you can cash in on at the Brick Vault, there’s also craft beer. “For me, it like checks all the boxes. It’s physically demanding. It’s creatively demanding, and it’s mentally demanding,” said brew master Amy Oxenham.

Oxenham attended the prestigious Siebel Institute of Technology, has a degree in Biology, and previously worked at Big Bend Brewing. “All of that together. I like to think I’m a pretty well-rounded brewer,” joked Amy.

Her beer recipes resonate with the region.  From a crisp Mexican Lager to a sweet pecan porter and her beers pair perfectly with Phillip’s BBQ. “She has the ability to do whatever she wants in regards to her beer profiles, and that’s what I think attracts people here,” said Phillip. “There is just so much craftsmanship and passion and design that went in to that one meal,” stated Amy. 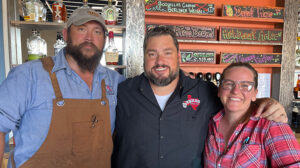 Phillip got started pulling things off the pit for my plate and that’s about the time I noticed, there are not very many cows or wood in these parts. Pretty much anything you need in this neck of the woods has to make the journey to get here. “We get our wood from our family spot there in Fredericksburg. We get a delivery from my cousin every six weeks. He brings about four cords every six weeks,” said Phillip.

Brisket, turkey, ribs and three different styles of sausage took up our entire tray.  I decided to start with the house made specialty sausage.  It looks amazingly coarse and once you taste it, it’s beautifully spiced. “I’ll be honest with you. I’m not a big sausage fan. I’m a fan of this sausage,” said customer Janis Jobe.

From there we’ll do the Jalapeno Cheddar which is stuffed with cheese and it’s just as tasty as the original, just spicier and cheesier. And finally, the Queso Flameado Sausage. A good spicy sausage, not as coarse, but just as cheesy and delicious! 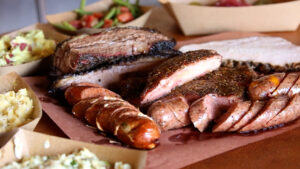 We went to Phil’s ribs and they had a nice vinegary finish and were delicious. “The ribs are huge and full of meat,” said customer Eloise Haynes

Finding barbecue turkey that moist in the Chihuahuan Desert. That’s a find! “Goldmine. I mean, it really is. It’s just a gold mine,” said customer Tony Currer.

You shouldn’t be able to find barbecue this good in West Texas. “It’s really that good. It really is. And I mean it seriously. You can’t really explain it until it just hits your mouth. And then once it hits your mouth, you’re just like, wow. That’s good barbecue. That’s great stuff,” said Tony.

Well, if the love of your life is looking for that romantic trip out to Marathon, we’ve got some good news for you. There’s a place for beer and barbecue and it’s called the Brick Vault. And it’s well worth the stop on The Texas Bucket List! “Like nothing you’ll ever taste,” said Eloise. “It’s fun. It’s a lot of hard work though. I mean, it’s long hours. It’s hard work, but at the end of the day seeing someone enjoy their meal is what it’s all about,” expressed Phillip. “There is a lot of incredible work that goes into curating this experience. And I think we do a good job, honestly,” said Amy.