Goodnight – There’s something to be said about the Panhandle Plains of Texas. The area around Amarillo is full of fascinating places that are rich with stories of Texas. “The history of gas and oil, the history of cattle, the history of ranching, the history of cotton farming. It’s an unbelievable experience that most people pay no attention to,” said Cecil Miskin, owner of the Herd Wear Retail Store in Goodnight.

Miskin admits that even he didn’t know how incredible this part of the world is and he knows it. “We are just a small part of really the crossroads of American history,” stated Cecil.

What seems a bit odd is Cecil’s huge shop being in such a desolate location. “That’s a question I do ask myself a lot,” joked Cecil. Turns out, it’s perfect for his passion for buffalo. “It was a hell of an opportunity to be on land that Charles and Mary Anne Goodnight used to own and raise buffalo and all that stuff,” said Cecil. 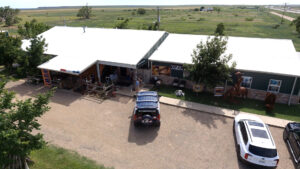 Originally a lawyer from Detroit, Michigan, Cecil moved to Texas in 1979.What brought Cecil down to Texas? “My first wife,” answered Cecil. In 1987, he took up the hobby, as he calls it, of raising bison. What made him decide to raise bison?  “My second wife,” chuckled Cecil.“She put her finger under my nose and shook it and said, ‘You’d better choose wisely, mister. It’s either me or the buffalo.’ And I made the wrong decision at that time. But after I got with wife number three, then we got the buffalo,” explained Cecil.

For what’s it worth, Cecil couldn’t even say Buffalo Springfield before being enamored with these big animals. “We fell in love with the animal and by working with the byproducts particularly, it’s made a difference in the industry,” said Cecil. 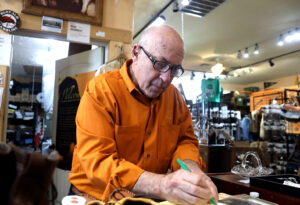 Now when he says industry, he’s talking about the bison business.  From coats, hats, soaps, and skulls there’s all sorts of ways to capitalize on these iconic creatures. “It’s an American commodity that creates multiple different products, all of which are pretty damn good,” stated Cecil.

For Cecil, it’s socks. “These are some of the socks that we have produced and are still producing,” said Cecil. “You got bison, it’s a hobby. In the spring, when you get out, you start finding they shed fiber on the bushes. We had lots of briers. And so they’d rub against the trees and we’d pick up this stuff and go,” explained Cecil.

Fortunately making socks is a lot safer for the bison. “The whole idea, our whole purpose was to support ranchers who were dependent upon the animals for their livelihood. That was our purpose. We didn’t get into this to become sock designers or open a store or anything else,” said Cecil. 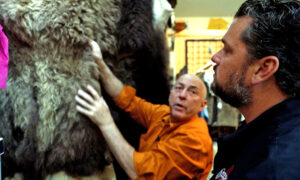 “We’ve helped spread the message of what the bison industry has become, what bison are to this country and to the world,” expressed Cecil. Cecil is quite passionate about the bison, and he sure does have a good reason to be. “That’s a tough one. Thinking about what was done to try to wipe out the natives by wiping out the bison, you don’t want that to happen again. Thinking about ranchers like Goodnight, C.J. Jones, Buffalo Jones, Walking Coyote, some of the folks that saved the bison from extinction, well, let’s keep it going. We don’t need to stop here,” explained Cecil.

So if you’re in the market for some best socks I’ve worn with my boots…Or you just want to explore the part of our state where bison still roam and Texas history is a wide and vast as the land, heading to Goodnight to be with the buffalo is well worth a stop on The Texas Bucket List. “The animal truly is an American icon, and we just want to help keep it going,” stated Cecil.