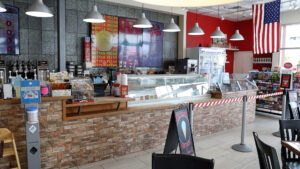 Midland – Heading to the ice cream store is always an indelible memory. The taste of cold, creamy goodness coating your tastebuds with its sweet symphony is always a reason to smile. Seeing those unfiltered faces full of joy is the exact reason JP Hearne opened his Fountainville Creamery in Midland. “There was nobody making ice cream. So we decided that’s what we needed to do,” said owner JP Hearne.

JP is a former photojournalist for the local paper but one day, he got the inside scoop into making unique ice cream flavors. Actually, it was culinary school where JP majored in pastry and desserts and that got things lined up into creating this ice cream factory with funny flavors.  “West Texas, they deserve their own ice cream. We’re using West Texas flavors with the West Texas formula,” said JP.

Cornbread, Tumbleweed, Avocado Toast, and German Chocolate Cake are just a few of the flavors. There’s even one called queso! That shouldn’t be associated with ice cream at all.  “You’re going to get flavors you’re not going to get anywhere else,” joked JP. The one flavor that makes everyone scream, is the Black Gold. 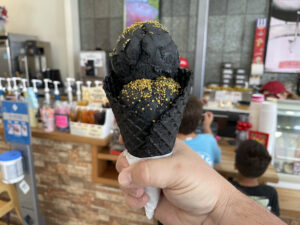 Before we try to strike it rich in the ice cream parlor, JP showed us how he carefully creates his creamy craft ice cream in his tiny kitchen. Since opening in 2016, JP has made 18 tons of ice cream! It all starts with his ice cream base he makes from scratch using local ingredients and natural flavors. His colors come from fruits and vegetables.

As you can imagine, when it comes to an ice cream that’s as black as space, there’s a lot of questions.  Like, should I even do that? “Some of them are just, almost like a mind game. They’re just a trick of the mind. The black gold, the longer people look at it and say, ‘That really looks like licorice. I hate licorice.’ Everybody hates licorice of course. But it’s a mind game. It does not taste like licorice and has no licorice in it. And it’s just a unique thing that gives you a feel for West Texas because of the black gold that’s here,” explained JP. 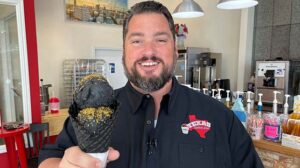 The ingredients to the black gold seem simple enough. “This is our Graham cracker. And then we add local honey.And it’s a charcoal with coconut. “Yeah. It’s made from coconut shells.So it’s activated charcoal.Tap the secret ingredient in,” explained JP.

Once it’s all in, JP flips the switch. A short while later, out from the machine comes a bubbling crude….I mean cream. “It does make your tongue black, so,” joked JP.

Time to taste some flavors! The Chupacabra has cajeta, goat caramel, goat milk, with a little bit of strawberry, but has a lot of delicious flavor! As for the Avocado Toast, it is surprisingly good despite have bits of crackers in the ice cream. Why not try some Cornbread too? Perfect combination of sweet and savory. Turns out Queso flavor isn’t really queso, but mango cheesecake with tropical fruit, and it is amazing! 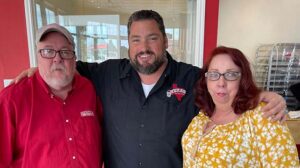 Finally, it’s time to tap into the Black Gold. Nothing like you’d expect. It’s just very light and little honey, a little bit of Graham in there. That’s very good. “I make more black gold than I do vanilla,” stated JP.

It’s been said that ice cream is cheaper than therapy and for JP making the ice cream has been very therapeutic, especially being able to do it with his wife Beverly. “Working together has been a blessing. I always know somebody’s got my back and I’ve got hers,” expressed JP.