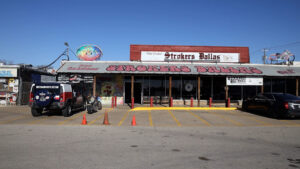 Dallas – When you first meet Rick Fairless, it doesn’t take long to realize he has a unique flair about him. “I got to be doing other things, I got to be moving around. I can’t be sitting still very much, I got to be moving,” said Rick while moving his arms and hands in a gliding motion.

Rick’s free spirit is a tribute to the generation he’s a part of and his motorcycle shop Strokers is a tribute to that time in American history.  Here it’s all about peace, love, and the Cowboys. “I grew up with the peace, and the love, and all that, and that’s the way I think it still should be,” said Rick.

Born in Big D and raised in Irving, Rick’s childhood is reminiscent of a time gone by, when being outside all day was just a way of life for little ones. “You were never in the house as a kid. Unless you’re eating, or sleeping, or grounded, you were outside. It’s just the way it was. You were riding a bicycle, everybody had a bicycle and you rode your bicycle everywhere, and you knew where all the kids were, because their bicycles were piled up in the yard or on the sidewalk. How many kids are you seeing outside riding bicycles in your neighborhood? You don’t,” said Rick. 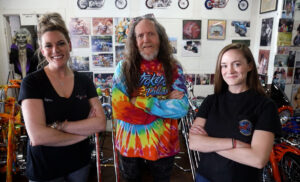 That feeling of freedom on wheels turned into an affinity for motorcycles. “If I’m having a bad day, sometimes I’ll just tell my wife or one of my daughters, ‘I’m going to go for a ride before I kill somebody. I’m going for a ride.’ I just want to be able to ride my motorcycle,” explained Rick.

For 20 years, Rick worked at a paint company but in 1996, he had enough and decided to rev up his dream of owning a motorcycle shop. “I just knew that there was something else, and I thought, ‘If I can make this my passion, my livelihood, wouldn’t that be cool?,” explained Rick.

Strokers was born but this wasn’t just going to be a place just to talk shop. “Somebody’s only going to come to a bike shop, well, they hadn’t been in a while, well, they’re looking for a bike, well, they need some parts, well, they need an oil change. But if you have a beer joint next door, they’re going to keep coming back every weekend,” said Rick. 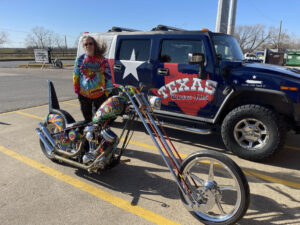 With his daughters by his side, Rick’s little family venture has become a huge hit with bikers, business clients, and just about anybody who enjoys unique people and places. “If a dumbass like me can be successful, anybody can, you just got to have a work ethic,” joked Rick.

Rick’s true calling is custom bike design.  That’s his bread and butter and he’s proud to show off his work. “When I did this, I call it the Psychedelic Chopper, that was a game changer, and that’s when people around the country started to notice, ‘Hey, this tie dyed kid in Dallas is doing some pretty cool stuff.’,” explained Rick. “When we build a bike for you, it’s something that we hope that you treasure forever. It’s an artistic piece for you, but it’s something that you can take out and ride,” stated Rick. 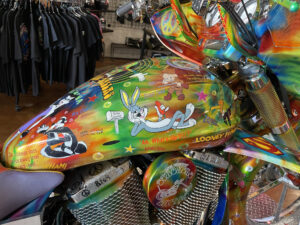 Any bike enthusiast will tell you convincing the wife is always the toughest part. “Wives are the big deal killers. You got to get the wife on board. So when somebody brings their wife in, we’re like, ‘Oh no, he’s bringing his wife in. Hey baby, how are you doing? You look good on the back of that motorcycle, I ain’t kidding, get on there, you’re going to look good.’ That’s what I keep telling her,” joked Rick.

So, what is Rick’s favorite ride in Texas? 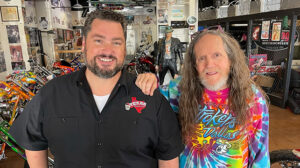 For a lot of folks, Strokers is that stop because reliving what life was like 50 years ago will always be on their bucket list. “It’s a motorcycle shop, it’s a Bar & Grill, it’s a live music venue, it’s a museum. And it’s not just about motorcycles, it’s about growing up in the ’60s and the ’70s,” expressed Rick.