The Texas Bucket List – Cowboys and Indians in Houston

Houston – In a town known for its cultural diversity, it’s no wonder you’d find a restaurant like Cowboys and Indians.

Imran is the man who has brilliantly marketed this fusion food restaurant.  He was born in India, but grew up in Ohio and moved to Houston in 2000 for a career in oil and gas. 22 years later, he now owns a restaurant too.

Walk into his restaurant and you’ll find all his family working there. “My uncles work in the kitchen. My mom and my aunts created recipes, and we’ve added different folks to the family. And it’s just great to be able to see all that,” says Imran. 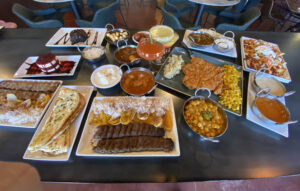 Alongside Chef Jamil Bhutto, the family cooks up creative dishes that pay tribute to two cultures on opposite sides of the world. Imran noted, “we’ve put together a great menu set-up that doesn’t have too much Indian food and doesn’t have too much Texan food, but it creates a unique concept.”

I had the opportunity to get in the kitchen and meet his uncles while also cooking up three unique dishes at this awesome restaurant. The first dish we made was a traditional Indian dish known as Beef Nihari which also happens to be Chef Jamil’s specialty.

Cooked 7-8 hours, Chef Jamil starts with a pot of sauteed onions and adds ginger and garlic. Then the Indian spices are added, and next is the beef shank. Then, more unique herbs and spices are added. 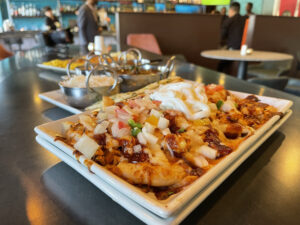 While that was cooking and simmering, Uncle Akbar got started on the Naan-chos which is a fusion dish that is similar to nachos but made with Naan bread instead of tortilla chips. It’s layered with mozzarella cheese, chicken, and a house made topping called the 65 sauce which is like an Indian barbecue sauce, according to Imran.

Our last dish was a unique take on chicken fried chicken which is prepared the same way you’d find at any old café in the Lone Star State. When it comes time to top it, you can get it with the butter chicken sauce which is unique to Cowboys and Indians.

Each of these dishes had an incredible, unique flavor that I’m sure you can’t find anywhere else.

“You can get nachos everywhere, but you can’t get Naan-chos, I don’t think, any place, but here,” said customer Don. 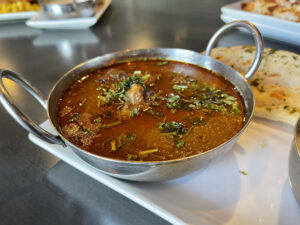 “It’s really got its unique flavors. And I think once you try it and you aren’t so intimidated by it, you’re hooked,” said another customer, Linda, when talking about the chicken fried chicken.

“The different flavors, the different everything. It’s just something absolutely brand new,” Don said about the Beef Nihari.

If you’re looking to travel the world and try a little Indian cuisine along with some classic Texas favorites, Cowboys and Indians is well worth a stop!

“Something I’ve always loved about Houston is whatever you’re in the mood for, you can find it,” noted Imran.