The Texas Bucket List – Goodstock by Nolan Ryan in Round Rock 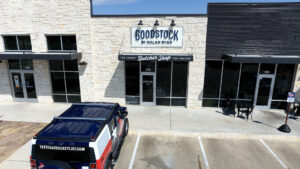 Round Rock – Cattle ranchers across Texas work all day, every day, to produce some of the finest filets of beef you’ll find. The best place to find these cared for cuts of beef is your local butcher, and in Round Rock, there’s a meat market that showcases a particular rancher’s array of beef, Goodstock by Nolan Ryan.

Nolan Ryan is a name any red blooded, meat eating, baseball loving person in our part of the world should know.  Considered the greatest major league baseball pitcher of all time with his 5,717 strikeouts and 7 no hitters, he dominated the diamond for over four decades, playing for the Mets, Angels, Astros, and Rangers. “I was very fortunate that I was able to spend 14 of my 27 years in Texas playing for one of the Texas teams,” said Ryan. 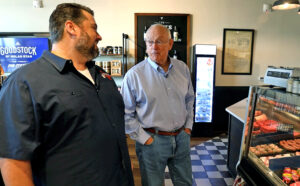 Nowadays, Nolan still has his hands in baseball as a co-owner of the Round Rock Express but when he’s not dealing with business at the ballpark, he’s got beef on his mind.

When asked if it harder to tame batters or bulls, Nolan answered, “Well, let’s put it this way, we call bulls on disposition and you can’t call hitters.”

In 1966, when Nolan made his MLB debut with the Mets, the life of professional baseball player was a bit different then. Having a beef business had always been on the back burner.

“While I was playing and never anticipating my career to go 27 years, I started trying to prepare myself for what I wanted to do and would probably do after I retired, and the cattle business was definitely one area that I had a passion for. And I had a passion for it from the time I was five or six years old. Why that is, I don’t know, but baseball allowed me to pursue that,” Nolan said. 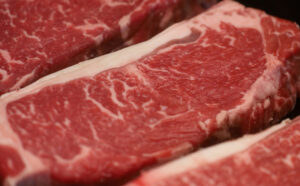 Winning his World Series Ring afforded him a reliable job for a really long time and he was able to purchase his first piece of property that he still owns today. “Being on a World Series team in ’69 with the Mets. In those days, what we called your World Series check was three times what my salary was, so that was a big windfall for Ruth and I to be in a position to receive that kind of money. And so I took that and bought the first piece of property that I own, and I still own it today. And so it allowed me to start pursuing what my interest was,” said Ryan.

Nolan is still active and out on the ranch doing things today. He said, “I think that the challenges of being active and being involved in things that you have a passion for makes a difference. We take a lot of pride in the cattle that we raise and have established, I think, a reputation of having good cattle.”

That’s why Nolan created Goodstock – a chance to show off his beef in an old school butcher shop. 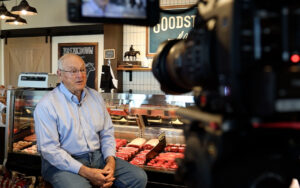 “Ranching’s a passion of mine. And so, to be in the retail beef business gives me an opportunity to see how our product performs and I feel real good about it. And when I sit down and have a steak and it represented what I was anticipating, I feel really good about it,” Nolan stated.

Goodstock is awesome because fans can actually come in and see some of Nolan’s ranching memorabilia, as well as have an opportunity to talk to the butcher and discuss different products, which broadens their perspective on beef. The memorabilia you’ll find at Goodstock is different than his baseball memorabilia, such as a set of spurs Nolan’s friends had made for him and the books he used to read while on the road during his baseball career about the cattle business.

While we know there are a lot of amazing moments in Nolan’s baseball career, there have also been some on the ranching side that are comparative. “Well, when I received a Golden Spur Award, I was very proud of that, and I was very honored that I was selected for that. And that’s voted on by the Quarter Horse Association, Texas Feedlot Association, Texas Southwest Cattle Raisers, and the Farm Bureau,” Nolan mentioned. 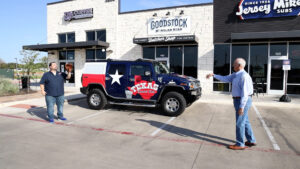 But if cooking meat isn’t really your forte, you can always experience Goodstock at some of our favorite BBQ joints across the great state of Texas, including 1775 Texas Bit BBQ in College Station and SLAB BBQ in Austin. “I think barbecue places do a real good job of promoting their product and promoting their individual restaurants. And when you have a popular place, you take a lot of pride in the fact that they’re using your product. And so, you want it to be a good experience,” said Ryan.

With their beautiful selection of beef, Goodstock makes for a great stop on The Texas Bucket List.  For me personally, it presented  chance to check something major off my bucket list.  Playing catch with Nolan Ryan.  Talk about checking off the list!