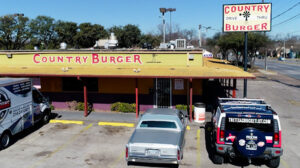 Dallas – On the southwest side of Dallas, on the outskirts of Oak Cliff, you’ll find Country Burger. From the outside, this yellow and red brick building boisterously advertising bacon cheeseburgers with windmills and wagon wheels looks like your typical easygoing greasy spoon, but it’s got a little more flare than that.

Rafael Jimenez is the manager of Country Burger and he’s been working there for 26 years. With such a long tenure at this timeless burger joint, Rafael sort of has the run of the place. So when it came time to decorate this diner, Rafael had the final say. He didn’t go with what you’d likely expect. 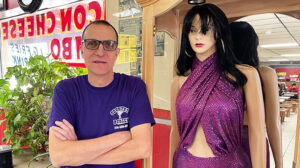 Given its name and outward appearance, you’d expect to look around and see pictures of John Wayne. But it turns out, Rafael is a super-sized fan of Selena. “Some people don’t say Country Burger, they say Selena’s Burger,” Rafael said.

In pretty much every corner of Country Burger, you’ll find some sort of painting, picture, or portrait of the late Latino singer that took Texas by storm. And from the moment Rafael arrives to work, it’s all about Selena. “In the morning, when I’m coming over here, I put on Selena songs. Every morning,” Rafael said.

With so much memorabilia on hand, Rafael has to store some of it in his office. But even with the vast amount he currently has, he’s always looking for more. 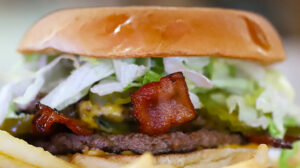 There’s even a Selena special. The Selena special is a spicy grilled chicken sandwich served with large fries and a large drink. The people love it and it’s one of their most popular dishes.

When Selena was tragically murdered in March of 1995, she was only 23 years old. It’s a moment Rafael will never forget. When he heard the news, he was with his wife and couldn’t stop crying. Even today, he still gets emotional about it. His devotion to the star turned into décor. The owner allowed him to put up some Selena things and then it spread to everywhere in the restaurant. 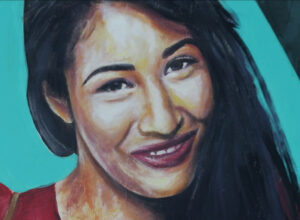 Today, folks come from all over to get a taste of the terrific burgers at Country Burger. Rafael is a reliable professional who keeps Country Burger up to par with its perfect patties.

So if you happen to find yourself in Dallas and are looking for a unique burger joint with a terrific tribute to the sensational Selena, Country Burger is well worth a stop on The Texas Bucket List!

“Anything for Selena,” joked Rafael, with just a hint of honesty.