Port Aransas – Fun in the sun is the name of the game when down on the Texas coast. Some folks are even lucky enough to live with the ocean in sight. “It’s a really good place to live if you like the beach and you like fishing and you like just being by the water,” said Amber Frazier. Amber is a realtor in Corpus who helps folks find their perfect place near la playa. 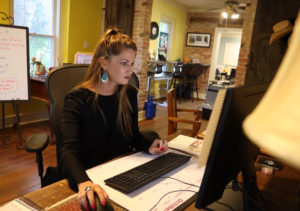 “You can find a nice house on the island for around $115,000 to $200,000,” she explained. Now being a realtor is a good gig, but Amber has another career that’s a bit more exciting. “Very much more interesting,” she agreed. As the night falls, Amber has a transformation into Stella Moon the Fire Mermaid.

Every Saturday night during the summer you’ll find Amber… I mean Stella Moon, at Bron’s Beach Carts in Port Aransas putting on a show that puts people in a trance. “She adds an exciting flare to the night,” said Kristy Jackson. “How could you beat that?” added Woody Gordon. “Generated a lot of excitement around here,” claimed Bron Doyle. 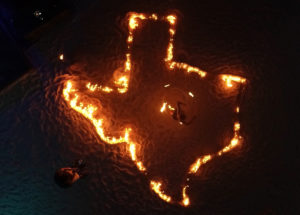 Stella lights the state on fire, literally! While we’re used to hot temps in Texas, it’s a whole other world to see her dance so close to the flames. “I get little burns here and there, but that’s just the name of the game. Play with fire, you’re bound to get burned,” Amber added, nonchalantly. “I just learned to get better and better and now I don’t burn myself at all.”

After 10 years of fire dancing, Stella Moon shows off here moves at Bron’s and brings her fire dancing show anywhere that needs to see the light. She’s performed on stage with rock legends and been all over the world bringing her fire to the festivals. It’s like people have money burning in their pockets to see her. “It keeps me going and keeps me flowing and everybody knows, they’re like, ‘Oh my God, that’s Stella Moon, the Fire Mermaid.’ And it just really makes me happy. It makes my soul really, really happy… It brings joy to people. It’s such a unique trade and a unique performance,” said Amber. 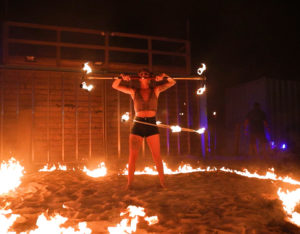 What starts out as fire dancing quickly escalates to fire hula hooping, fire throwing and fire whipping! “My favorite trick is my fire whip. It’s wild,” she said. “That crack of the whip, I don’t care if you’re just locked in the show, it’ll make you jump,” said Woody. “[The most difficult trick is] fire spitting. You can aspirate your lungs and die immediately. So it’s the most dangerous trick when it comes to fire dancing,” Amber explained. “It’s just all about practice. Practice makes perfect,” she added. “I’m not worried about her playing with fire. She’d been doing it a long time. I think she’s super safe about it. She’s got a lot of people helping her, and so I think ultimately, she’s an entertainer,” said Kristy.

There’s no smoke and mirrors here, just the sight of fire dancing in ways it’s not supposed. If your ears are burning, chances are it’s from the dull ripping hum of the combustion cutting through the air. “When I’m fire dancing, I don’t see anything or anybody around me. It’s strictly on the fire and the sound of the fire, it’s just calming,” said Amber. “She’s so good at it that she can get close to people and do all the tricks that she’s doing and she knows she’s in control,” added Bron. 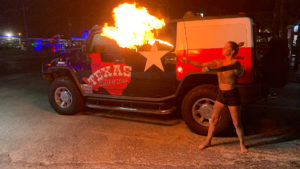 “It’s a dream come true. I love it. I get to bring joy to people’s lives and it’s literally mesmerizing. So it just makes me so happy. It’s changed my life completely,” explained Amber. “I don’t know of anywhere else in Texas, and I was born and raised here, that offers that kind of experience,” claimed Kristy. “I haven’t been anywhere else where you can see something of that quality, that amazing,” agreed Woody. “She’s definitely the best fire dancing real estate agent in the state of Texas, hands down,” confirmed Bron.