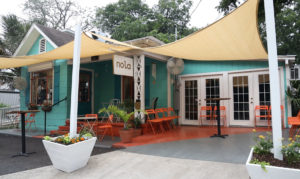 San Antonio— A few hours east of the Sabine, you’ll find some incredible flavors inspired by French cuisine. Considering it’s a three and half hour drive from the Texas border to New Orleans and the fact we’re known as The TEXAS Bucket List, we had to find this fancy food elsewhere. Fortunately, we found NOLA Brunch and Beignets in the Alamo City.

“It’s kind of a little trip to New Orleans, but more around the block than a few hours away. So it’s good,” said customer, Sarah Ostrom.
“Some of the best food I’ve had in ages. Loving the food,” raved customer, Daryl Laster.
“She’s been in New Orleans before, so she says it’s pretty much exactly how it is there,” added another customer, Dillion Sutton. “Laissez les bons temps rouler,” said owner Pieter Sypesteyn.

Pieter is the Cajun kid who grew up loving the cuisine of the culture he was cultivated in. When he moved to Texas, he knew he had to bring it with him—brunch that is.
“New Orleans is real big on brunch and kind of my mission since I left New Orleans as a kid was just learning how to develop those flavors again and how to cook that kind of food ’cause it’s hard to find outside of New Orleans,” said Pieter. 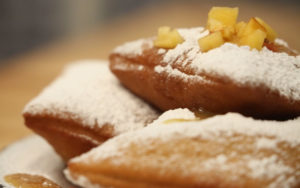 Grits, praline candied bacon, and beignets are only the beginning to this expansive brunch menu with a big easy feel.
“Brunch is supposed to be fun for us.. And if [someone’s not having fun]… mimosas!” said Pieter.
Before we pop the top on the champagne, we picked out a signature dish to dine on called the Blue Crab Omelet.
“Two of my favorite things in life: seafood, Creole cooking,” said Daryl.

“We’d do a three egg omelet, French style, so it’s cooked real nice and light and fluffy. We make some Creole cream cheese in-house, which is this kind of an old New Orleans style farmer’s cheese. It’s a real simple creamy cheese. It’s not real sweet, but we do a little bit of that Creole cream cheese on the inside and then we do some fresh blue crab out of the Gulf and it goes right on top. A little bit of Creole hollandaise, which is a pretty standard hollandaise, where we do a little Creole mustard inside and some Crystal hot sauce, just to spice it up a little bit,” explained Pieter. “I have [been to New Orleans] a few times,” said Ryan Torres, an employee at NOLA Brunch and Beignets. 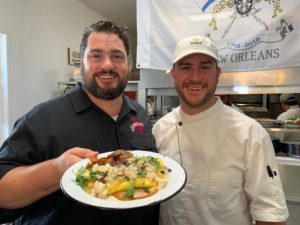 Ryan got to cracking on the omelet that’s prepared with care.
“So what I’ve got here is… butter melted, just warmed it up a little bit. I’m going to come over here and get some eggs… mixed with some heavy cream,” he said. Once the eggs were cooking, Ryan prepared a plate to place the creole creation on.
“This is the spicy chipotle gravy that we put on the bottom. We just want to put a small amount because we don’t want it to overpower… I’m going to hit the crab with a little lemon juice. Just to season it up. I’m going to go ahead and grab my Creole cream cheese… And that’s something that we make,” he said. “So here’s that omelet. I’m going to go ahead and plate it right in the center of the plate. Traditional French omelet is nice and wet… Crab’s ready to go. I’m going to hit that with a little Creole hollandaise on top. Not a lot. I mean we just want to kind of impart a little flavor on there, not really overpower it,” he explained. “A little bit of fresh arugula on there, just to give it some color and contrast… you got to have the greens on there…. Go ahead and plate up a crab… we make sure you’re getting your money’s worth here. Get some nice fresh crab,” he said. This might be the finest dish ever featured on The Texas Bucket List.

“Then I’ll just go ahead and finish that up with just a little more lemon juice on the arugula and a little bit on the crab just to give it some flavor,” added Ryan.
“It’s authentic food. You can tell it’s freshly made. They put a lot of love into it,” commented Sarah. The freshness of that crab and fluffiness of those eggs come together with a little crunchiness from the greens, giving it great texture, but it’s more about the phenomenal flavor. “It’s really great to be able to show different kinds of food and different kinds of cuisines and lifestyles for people,” said Pieter. There are not enough crab omelets in this world.  “It’s definitely smelled like crab when it came in, but it’s really good. I liked the hollandaise a lot,” said Dillion.
If you haven’t had a crab omelet from NOLA Brunch and Beignets, you’re missing out.

“They offer a different cuisine, different delicious food and I think everyone in Texas should come and try this place,” added Sarah.  We are all into waffles that are the shape of Texas, but every once in a while, you need a grownup meal.  “It’s a nice, off the path, delicious, charming experience,” claimed Daryl.

Well, if you’re looking for a breakfast that’ll bring you out of your shell, it’s safe to say that the Blue Crab Omelet here at NOLA, San Antonio, is well worth a stop on The Texas Bucket List. “I really just want to provide the neighborhood with something that people would enjoy and give people… kind of a different dining experience, a different style of brunch and just some real authentic flavors from New Orleans,” concluded Pieter.