Cameron, TX— A few miles northeast of the massive Austin metropolitan area sits Milam County.  Established in 1836 and named after Ben Milam, one of the heroes of the Texas Revolution, the county is rich with history.

The county seat of Cameron has more to offer than just old stories, and we get to take a tour of it from a sky high view… well sort of. The Milam Country Railroad Museum has an amazing replica of the Cameron Square and details a special time in the life of the creator. 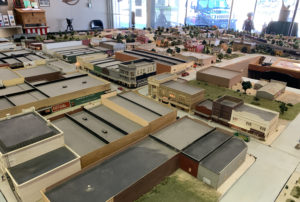 “[Cameron is known for] friendly people. And railroads,” said Jamie Larson.  Jamie is the director of the Milam County Railroad Museum, which sits catty corner from the old courthouse built in 1892, but that courthouse also sits inside the museum. “The courthouse is the showpiece,” said Jamie.

It’s part of a miniature train set that really gives you a bird’s-eye view of what Cameron was like back in the 1940’s.“Rarely ever see a train layout or a city layout that’s as complete as this, and all together in one place… There’s a wedding going on at a church. There’s cedar choppers, there’s hobos, there’s a broken water main…you can see life in a town,” he said. 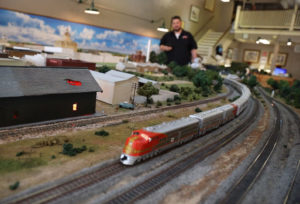 While Cameron hasn’t grown much since then, with the population remaining at around 5,000, the miniature model of it has. “Well the scale, the size of it, it’s pretty amazing,” said Jamie.

“Everybody calls it a model railroad layout. But it’s a model of a town with the railroad going through it in my book,” said John Johnson. John is the man who created this retro replica and he really likes trains. When he began this project, he never expected it to expand so large. “It was just an accident,” admitted John. 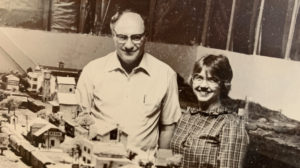 A collector of model trains since he was a boy, John took over 30 years to build his big project and it all started by simply building a building that had a big place in his heart. “The old yellow one over there… That was Southern Pacific, that’s where I used to watch the train,” he said.

From there, it grew and grew and grew. During the 70’s, 80’s and 90’s John and his wife, Francis, took the time to replicate as much of Cameron as they could. They began researching the town’s history by combing through old pictures, listening to people’s stories, not realizing that as they built the big little town, they we’re making their own story. “When he married Francis, she caught on to and understood that love that John had for it and she stood right beside him and helped build all of this with him,” said Jamie. “I enjoy using my hands and I was blessed with a lovely woman… a wife that enjoyed helping me,” said John.

John added little details of his life as a boy: his parent’s home, complete with his dog Teddy in the backyard, his grandmother standing outside her house ready to great him, and other sentimental touches around every corner. “I still think of it and dream of it, and it was a good town. I had a lot of friends, kiddos who grew up with and we roamed the streets together, played, went to the movies together…It’s all in here,” he said.

John built the buildings while Francis did most of the painting.  Together they kept on track and transformed Cameron into Cameron, on a smaller scale. “They drove around, talked to people together, got pictures from people of the buildings that were here back in the day… It was a team effort. The two of them were attached at the hip when it came to this model railroad,” added Jamie. “Well, it was fun,” said John.  That fun included making the extremely detailed courthouse that took months to create. 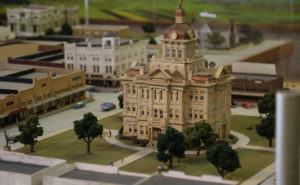 “Decided I was going to build the courthouse, so she helped me photograph it and we measured it. We walked all the way around the real one and measured it. And then she had a scratch pad, and she drew it all off,” John explained. “I drew the plans and scaled it down and then I just started, went out and bought all the parts of stuff I need and what I couldn’t buy I made. I’m real proud that it’s being showed and I’m real proud it’s getting the publicity that it’s getting… it’s not doing me no good, but it’s doing the community of Cameron good to have this kind of publicity… I hadn’t got one dime out of this. The only thing I got is my love for doing it,” he said.

“I think it’s just truly a love of Cameron. As I’ve gotten to know John, I know his heart is big when it comes to Cameron,” said Jamie.

The only other thing closer to John’s heart is Francis. Visiting his creation of Cameron doesn’t just bring him back to when he was a boy, it brings him back to the decades he spent with his wife creating their tiny version of their hometown. “She’s on my mind every day… I was the luckiest man in the world to have found her. She was quite a girl. Good mother, good wife. We enjoyed each other,” said John.

So the next time you’ve got a few minutes to catch the train that runs through the middle of Cameron, visit the Milam County Courthouse to see a special moment in time that was made during some special times for John. “God’s been good to me. He gave me a good wife, a good family,” said John. “I don’t have no answers for you. What I’m telling you is what I knew, and what I did, and what I loved and that’s it. It’s just fantastic.”

“It’s a just a glimpse back in history, and it’s amazing,” concluded Jamie. “I just think every Texan needs to see this. It’s something special.”