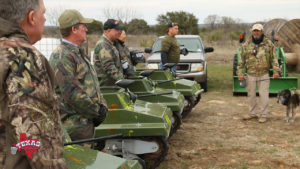 Hico— In the hills of Hico, lies a battlefield unlike any other in central Texas. Often times, you’ll find Robert Valdez there, readying the troops. “You do not win medals by dying. Okay?” said Robert. Every day, this Army Veteran has to deal with an assortment of greenhorns. “We’re going to have a good clean fight and be victorious,” he continued. The battle he’s preparing them for involves tanks. Really small ones. “Men and ladies, we’re going to go out there and have some fun!” concluded Robert.

Mini Tank Battlefield is a 66 acre sports and recreation paintball park that gives visitors the opportunity to drive miniature tanks. “It’s smaller scale, but you still have fun,” added Robert. The fun doesn’t stop with a simple ride; these things really do shoot! But instead of perilous projectiles, it’s paintballs. “Not a big bang, but it still gives you the thrill,” said Robert.

Robert Valdez is originally from Robstown and retired from the Army as a first sergeant. “It turned out to be that I was still pretty active and wanted to do something else… more fun,” he admitted. During his 21 years of service, he drove, you guessed it, tanks.  “I drove an M60, old M60s and then we converted to M1s, and I actually drove an M1 and actually shot an M1 when I was a first sergeant. Before that I was actually on 113s and M114s and also Bradleys. I’ve driven all of those,” Robert explained. He was a tank operator for his whole military career. “60 tons of fun,” he added. 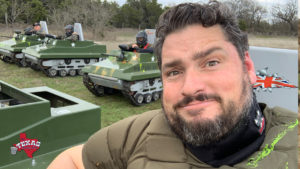 During a visit to England, he came across some small tanks and thought they’d be a hit back home in Texas, so he created a think tank of friends to start the Mini Tank Combat Battlefield Zone. “I thought he was crazy,” said Paul Lockhart. Paul served in the Air Force and is one of Robert’s partners in this battle playground. “I thought it was a unique thing. I thought, ‘Okay, maybe you’re on to something. This could be fun,’” he admitted. They emptied their tanks to purchase these mini machines.

“It took about eight months or so to get them from once I ordered them,” Robert explained. “Customs kept them for a while. They wouldn’t release them. They thought I was making some sort of military militia I guess. I don’t know.” Now getting to drive these mini mobile movers that happened to be built like a tank brings out all sorts of characters.

“This is the tank… each one of them weighs about 700 pounds. It’s hydraulically driven by a 18-horse gas engine. It’s a Briggs & Stratton engine, and it runs off of a 3000 PSI hydraulic tank that drives the motor. It drives the axle. It works like a skid-steer. Anybody that’s familiar with like a Bobcat or something like that. It’s got the joysticks in it and that’s how you control it. You go forward, reverse and you can zero turn it and things like that pretty much. Its top speed is less than two miles per hour. So if you’re getting in it and expecting to transverse across this pasture at a high rate of speed, that’s not going to happen,” explained Paul. 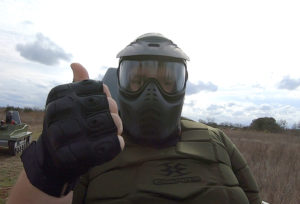 Visitors suit up and head to battle, and it doesn’t take long to realize how fast the paintballs can fly. “We got them calibrated to a rate of about 270 feet per second. It doesn’t sound like a lot, but when you’re in close proximity with these things, you will feel it and you do have some concealment inside the tank where you can duck down if you’re taking hits… So you do have some protection and we wear all the head protection and all that stuff…. If you find yourself under fire, duck…Crawl under the hood. You will take hits,” advised Paul. “It stings no matter how much clothing you got on, it does sting. It feels like a pinch.”

“It was pretty cool because you could actually get the feeling of getting hit from all sides and not even realizing where it’s coming from,” added Steve Wiley. The tank tussles to take part include Fury, a chance to defend a crossing from incoming tanks. “Once we get out there and get in the battlefields, it’s a whole different world,” said Paul. “There’s a tactic to it and a strategy,” he said. 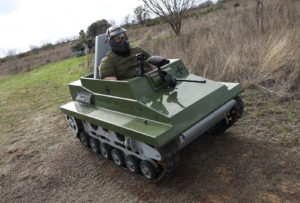 Then there’s the Battle of the Bulge which is sort of a free for all for all involved. “You learn a lot about manual dexterity because you’re having to operate these things and being able to shoot the guns and stuff like that, it makes it really difficult. But at the end of the day, you don’t really get hurt. Maybe a few bumps and bruises, but everything’s good,” Steve Wiley assured. “It is scary when you’re still, but you hear the other tank making that noise. You get hyped up about it,” Robert explained. 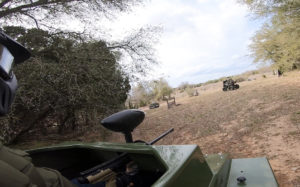 The paint gets absolutely everywhere. “You got a lot of hits on the flank…Because your flank was exposed, but other than that, you did great. Yeah, they got you on the side in your arm also,” assessed Robert as Shane pulled his mini tank up after battle. While some splattered pigment and a few small bruises from bursting bubbles of paint are the extent of your war wounds, this is a fun excursion, a chance to do something different, and it’s all put on by veterans who just want to bring a smile to folks across the Lone Star State. “That’s the whole intent of that we’re being out here is—having fun,” confirmed Robert. “I think this makes him feel young again,” Paul explained. “So it’s nice to see him when he smiles and comes out and sees these little mini tanks. It’s his toys, so it’s cool.”  “I was kind of leery about it, but once I got out here and saw the tanks and rode in them, it’s fun. I’m going to be back,” said Paul. “It gives you a feeling of camaraderie with the people that you’re working with and you’re able to see what all is going on with the people that are supposed to be on your side, that you can work together as a team and get the job done and hopefully survive to fight another day,” concluded Steve Wiley.