Goodnight⁠—40 miles southeast of Amarillo is the small community of Goodnight. Only about 20 people live here today, but before the yellow city was painted on the map, Goodnight was a good-sized town of about 300 folks who flocked here thanks to Charles Goodnight. 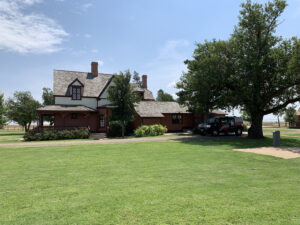 “Charles Goodnight may be the perfect icon for Texas. Great…in ideas, and stature, and success,” said Karli Fields. Karli guided us around the home that Goodnight built for his wife Mary Ann back in 1887. “Without Charles and Mary Ann being here in the 1800s, people probably would not have settled here. It’s a harsh terrain, and without anyone being established, I don’t think anyone would have survived. And we’re right on the edge of what was Comanche territory,” said Karli.

Charles Goodnight is known as the father of the Texas Panhandle. He helped established the Goodnight-Loving Trail, invented the chuck wagon, founded the JA Ranch in Palo Duro Canyon, and thanks to wife, saved the Southern Plains bison. “He didn’t understand what ‘take a break’ meant,” said Karli.

The historic homes sits less than a mile from the rim of Palo Duro Canyon, a place Goodnight spent a great amount of time during his cattle career. He was constantly out on cattle drives, so Mary Ann held down the fort in his absence. “They called it the Castle on the Prairie. And to imagine being out in our very flat landscape, riding in your wagon for days and days and seeing absolutely nothing. And then coming across this house with a nice woman that would keep you and feed you, would be a send out here in the plains. In the middle of nowhere, then this big gorgeous house,” said Karli. 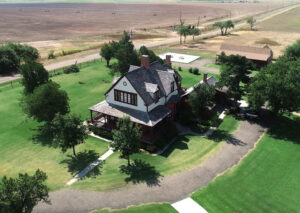 Although the house sits out on the prairie, the Goodnights spared no expense. The immaculate home includes fine furnishings, decor and even stained glass. “I’m not sure how much it cost to build this home, but it is a 2,900 square foot home,” she said. Charles did not spend much time indoors, even when it came to sleeping. “I love the sleeping porch upstairs. It’s such a unique feature. It’s a perfect view, as well, of the Palo Duro Canyon,” continued Karli, “Old cowboy, being indoors was probably a little tight for the man because he was over six feet tall and he always stayed outdoors. I’m sure he had a nice buffalo robe.”

Mary Ann made sure the home had fine furnishings, but just like any good ol’ boy, Charles had a man-cave. “This is Charles Goodnight’s den or his office, and there is no sissy wallpaper back here. This was his man cave. Charlie would sit back here and smoke his cigars,” said Karli. “He also sat back here to be interviewed by J. Evetts Haley and Laura V. Hamner. Let’s see, Quanah Parker has been here to visit him, and they did end up being friends.”

It’s been said that behind every great man is a great woman, and for Charles, it was Mary Ann. “She saved the bison. She was an amazing woman. She was tough. She was dedicated. She lived in a dugout with the man, even though she was from a wealthy family. She educated her cowboy. She loved her cowboy. She treated each and every challenge she met on the High Plains, as the only woman and the only person here for many years, with the open and happy heart. With her little bitty, five feet tall, she was tough,” she explained. 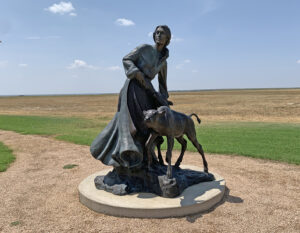 These two icons who set up shop in one of the most desolate parts of Texas, made the most of their short time here in the Lone Star State.  Today, you can find Charles and Mary Ann in a family plot just down the road from their historic home. Seeing how they lived and imagining what it was like all those years ago makes the Castle on The Prairie a royal relic on The Texas Bucket List.“I think it’s important for everyone to come visit here, especially Texans, because I know we all love Texas, and we’ve got to see every little piece of it,” said Karli. “This is a huge part of the panhandle. It’s a huge part of our history.”