Texarkana—Though you may not know the term Ragtime, chances are you’ve heard The Entertainer, a tune with roots right here the Lone Star State. The Entertainer is one of 44 original ragtime pieces penned by Scott Joplin, a composer born in Texarkana in 1868. 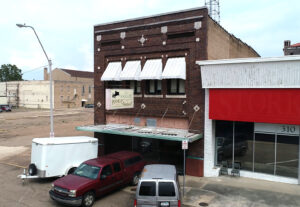 Howard Gustafson III is piano technician and owner of the Ragland Piano Company in downtown Texarkana. He understands and appreciates the legacy Joplin left behind. “Scott Joplin gave us an entire genre of music that it crosses racial barriers, age barriers, time barriers. It’s wide appeal. So, certainly being a part of his formative years, Texarkana can lay claim to bringing the world that style of music,” said Howard.

It’s fitting to find Howard in this old piano store doing things with pianos Joplin would never believe. What’s crazy about Howard’s piano pursuit is that there’s no strings attached. “It’s kind of interesting. What we do here is kind of two extremes. A hundred year old technology, cutting edge technology, very little in the middle,” he explained. 90% of Howard’s business at the Ragland Piano store doesn’t involve tuning or tightening strings, but rather replacing them all together. “Here’s an example of a high end digital mechanism that we’ll incorporate in some of our custom built… This will actually be put inside a piano shell, whether an upright or a grand piano,” he said. 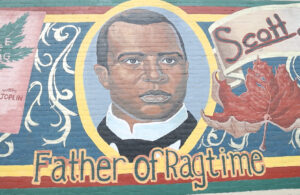 “We went through this phase where we’re like, we have all these pianos nobody wants. Let’s make other stuff out of them, and that has transitioned into, hey, we can still make them musical instruments. So, now let’s repurpose them as digitals,” Howard explained. Hitting the right note doesn’t take precise measurements with ears anymore, which is a good thing for Howard. “I tell people, as you see me shuffling around right here, I can’t really sit still long enough to tune a piano. I have to be taking something apart or putting something together,” he admitted.

This is somewhat new to this piano technician that got his start with his father back in 1985. “There’s always been piano players in the family, instrument players in the family. My father is probably most responsible for me being a piano technician today because we took the family piano apart. He had an interest in how pianos worked and so I helped him do that. We vacuumed it out and kind of peeked inside of it, found some old coins underneath the keys,” said Howard. “Between what I learned with him in the shop behind the house for a dollar an hour, I kid you not, and then working at that music store, it kind of built the foundation to move to Texarkana and then open a piano store.” Howard honed his ability to repair pianos because for him, it wasn’t too tough. “One real benefit of working on pianos is if you know how to fix one note, you can fix the other 87,” he said.

Playing the instrument was a whole other ballgame. His parents weren’t sure it was the right path for Howard so he started teaching himself and you’ll never guess the first piece he picked up. “First song I ever learned was by Scott Joplin,” said Howard. “As a 14-year-old kid wanting to learn piano lessons to convince his parents, I picked up a book of the collected works of Scott Joplin, picked out a song and played it. That’s in Memphis, Tennessee, 300 miles away. I had no idea what Texarkana was.” 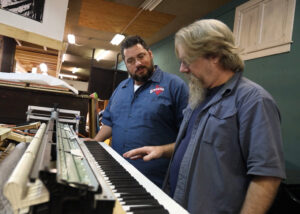 “Over the summer, I learned how to play the first part of Scott Joplin’s Entertainer….” he said. “I had enough musical knowledge that I would count up the staff and say, okay, that’s an A and I put my finger on the A. I’d count and find the next note and I would learn what chord that was and then I’d just progress through the first movement or two of The Entertainer. That persuaded my parents to let me take piano lessons and get some degree of education, which of course has benefits me today.”

The legacy that Joplin left behind and Howard’s love for music, push him to keep his hankering for harmony and plead to parents to never let their children refrain themselves from learning a refrain. “That’s where part of the music business has gone is parents don’t give them that little nudge and say, yeah, you’re going to take a year of piano lessons. We’re all like letting little Johnny and little Susie pick out what they want to do. Oh, we don’t want to crowd them any,” claimed Howard. “People need to encourage their children to take a step that’s uncomfortable and they’re going to expand their boundaries and music is part of that.” 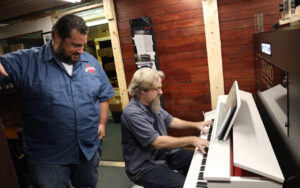 This piano man practices what he preaches by passing along his passion to his three boys. “They are actually in college. Did not cost dad one penny. Thank you boys,” he continued, “…When I would drop them off at their mom’s house and I’d be getting their instruments out of the car, I would hand one of them an instrument. I’d say, ‘What is this?’ The proper answer was not my trombone or my saxophone. The proper answer was my ticket to college and it worked… Music has some real benefits and piano was the foundation for that for them.”

Howard keeps plugging away on the pianos with the knowledge that history and technology are behind him. “Anytime a family comes in and they’re buying a child a starter instrument, I think somebody showed Scott Joplin his first piano. What if that had never happened? Arguably would we have jazz because that’s kind of a derivative from ragtime,” he said. “I’m very conscious of what I’m part of…It’s an honor to be part of that progression in that person’s life and their musical journey.”