BEAUMONT – The sound of popcorn popping in the microwave and the smell of butter through the air always gets folks excited for an afternoon snack but over in Beaumont, there’s a place putting popcorn through a much more particular program.  You could almost say Beaumont is the center of the popping universe. 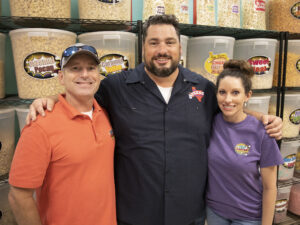 Harvey the owner of Pop Central Popcorn, he has the unique distinction of having a name associated with one of the worst storms Texas has ever seen.  Hurricane Harvey which hit the Texas Gulf coast in 2017.

“Let’s put it this way, I know I don’t want to be famous because I heard my name for about four days and I couldn’t stand hearing it anymore,” said David.

But his popcorn has put him on the map in a more positive way. “Who doesn’t like popcorn? It’s been around forever,” joked David. 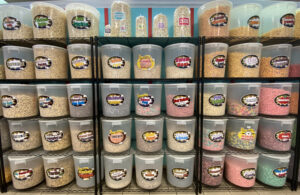 You see David’s taken popcorn and put an entirely new twist on it, creating flavors that really pop. “It’s over the top. It’s the best that can be made, in my opinion,” said David.

With his wife Carly close at his side, the couple has created Pop Central Popcorn.  A colorful shop in the Golden Triangle that tings with tons of tastes like loaded potato, pizza, and flaming spud.

David used to work in the refining field but he needed the relieve some pressure, so he turned to popcorn. “I’m all about making people smile, having a good time, making people happy and of course, I want to help everybody and my wife does, too, at every turn. So we opted to do this. My philosophy is it doesn’t matter what you do, as long as you put your heart and soul into whatever it is that you’ve got going, you’re going to be successful,” said David. 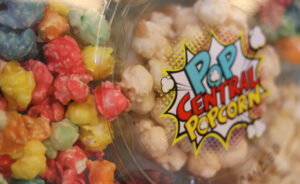 While popcorn perfection is his passion, David doesn’t get corny when it comes to philosophy, it’s pretty darn deep. “Success is defined as a man that is proactively realizing a worthwhile and attainable goal. The end result doesn’t make a man successful in my mind. It’s the progressive realization of that worthwhile and attainable goal,” said David. But then again, it’s not all kernels of knowledge. “It’s hard to fly like an eagle when you’re surrounded by a bunch of turkeys,” immediately joked David.

First off, we tried the Flaming Buffalo Spud.  “The hottest one that we actually have at this point in time,” warned David.  After taking a bite, it didn’t take me long to draw my conclusion.  It’s good and it’s got a lot of flavor layers. We then moved on to the dill pickle which was sour but oh so good.

After just a few different types of popcorn David suggested we “clean the palate.”  I never thought I’d hear that while eating popcorn. “Yeah. We have to because I’ll blow you out after three or four if I pick the right flavors. I’ll blow out your taste buds for sure,” warned David. 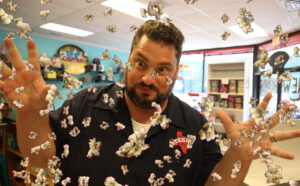 From there we tried caramel sea salt, spicy crawfish, blackberry cobbler, and finally loaded baked potato.  Each one of these flavors is beyond description, it’s hard to believe how the ingredients come together.

“100% artisanal is the way that we like to look at it,” said David.  That includes to interestingly named unicorn poop. “The way that we do ours, it’s as fun to eat as it is to look at,” joked David.  Never thought I’d say that with a word like Unicorn Poop. 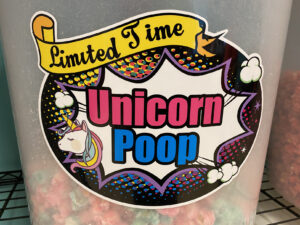 Unfortunately, with the preposterous amount of popcorn they make, not all of it gets to be carted off for the enjoyment of foodies looking for a unique treat. “We do throw away some popcorn. It’s inevitable,” said David. I’m sure it’s Unicorn Poop. “No, no, that one, I don’t really think that we’ve thrown out. You would think that we would throw away all of it, right? But we really don’t,” assured David.

So, if you’re looking for a colorful way to enjoy popcorn, a stop at Pop Central Popcorn in Beaumont is a great way to get an explosion of aromas and seasonings that burst on The Texas Bucket List.

“We’re changing the way popcorn is perceived right here in Beaumont, across the country,” said David.